Winner Takes All by Jacqueline Rayner

Plot: The Doctor returns Rose home to find her mother has won the lottery and a computer craze has hit the Powell Estate. Death to the Mantodeans is the latest hit and it’s free for lucky winners of scratch cards. However the fine print omits the part about being transported to an alien planet and used as a weapon in a deadly war…

Northern Adventurer: What a laugh! If Justin Richards had trouble capturing the intrepid duo Jac Rayner writes for them as though she has been doing so for years. Whatever plotting defects this book might have, the regulars glow from every page and make this a hugely enjoyable experience.

The Doctor never saves anything smaller than a planet. He got a merit badge in time travel, Monsterithology, interfering in the destinies of planets and cookery. The Doctor has an expression where Rose is unsure if he wants to smack her or kiss her. If a Time Lord saved the world and when there was no one there to know it, was he still a hero? He throws a massive wobbler when he forced to use Rose the way he does. He is as damning on humanity as ever, condemning them for bringing this latest disaster on themselves for wanting a free lunch. Rose was never sure if the Doctor simply pretended not to care, it was a dry humour thing or if he really didn’t care.

Chavvy Chick: This is Rose’s book through and through…Rose’s family, Rose’s boyfriend, Rose’s home…so it’s fortunate that I am eating my words already from my condemnation of her character in print in The Clockwise Man. Jac Rayner always gets her regulars right but has simply worked wonders with the girls over the years. She gave us a hilarious and sympathetic Anji in Earthworld, a professional and desperate Sarah Jane in Wolfsbane and gave us the definitive Bernice Summerfield novel in The Glass Prison. She introduced the glorious Evelyn Smythe to Big Finish and would go on to write Martha Jones to perfection in The Last Dodo. Everything about Rose sings in this book…she is childish, witty, intelligent, frustrated, charismatic, flirtatious…a hugely flawed but ultimately lovable character. We see the real horrors of her world and can compare that with how much she has changed since she has left this environment. She gets to be the object of three men’s attention, to save the Doctor and kick the ¤¤¤¤ out of the bad guys. Rose rocks!

Rose has gotten used to the inside of the TARDIS and thinks it is funny how you can get used to even the most incredible of things. What was her home – with her mum or in the TARDIS? She thinks Mickey is quite a catch even if he doesn’t own a time machine. 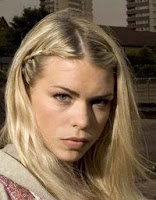 She feels her relationship with him was her old life, she wasn’t that person anymore. Her mother is up for a freebie and has a reputation for being a bit of a slag. Rose can swallow her anger now and ignore bullies. If the Doctor and Rose are sharing a bedroom, Jackie doesn’t want to know about it! Rose is described as a slag who did her boyfriend in and a thoughtless cow. She is disgusted with the Doctor when he is annoyed that she visited her mum in hospital when there was work to be done. Rose feels conflicted when they receive a phone call from the boy who beat her mum up, he is dying, and she is forced into the frustrating situation of pitying somebody she hates. Just because it was the Doctor’s time machine that didn’t mean Rose had to play entirely by his rules. Rose is also described as totally beautiful, utterly cool and just, well, perfect. She wonders if she throws up but can’t open her mouth if she will choke to death on her won vomit. Does she as his companion, validate the Doctor? The TARDIS has taken a shine to Rose.

Blaidd Drwg: Bad Wolf is one of the games Mickey owns.

Twists: You’ve got to love it when Mickey gets a rather abrupt visit…from Percy the Porcupine! The Quevvils have infiltrated the Earth with the most powerful weapon…scratch cards! You can win a holiday and you are transported to the planet Toop and used as a soldier. Those that win a computer console, unbeknownst to them, are controlling the holiday winners. When it says ‘Game Over’ they have murdered a human being. The Mantodeans have a force field around their stronghold which kills Quevvils so they need humans to get through it. In a shocking development Jackie is beaten to a pulp and Rose thinks seeing her mum as a fragile human being instead of a superhero is the worst feeling in the world. Rose takes a phone call from a dying boy. The Doctor is astonished to discover people have discovered the secret of the scratch cards and are selling them on the internet as an easy way to have someone you hate murdered. Rose is transported to the Mantodean stronghold and the Doctor is in the unenviable position of having to control her like a puppet. The Quevvil quills penetrate and open out like Christmas trees. The Doctor makes some great modifications to the software that turns Rose into SuperRose…she kicks the crap out of the monsters, leaps over pits and travels faster than a speeding bullet! Rose coming face to face with Darren Pye as he fights his control to raise his gun to kill her is very tense. For his efforts the Mantodeans decapitate him! 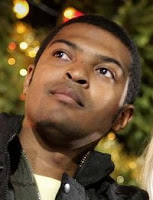 The TARDIS sound is described as the most wonderful music ever, it was the greatest symphony ever written, performed by the best orchestra in the world.

Funny Bits: This is such a gigglesome book…I found myself chuckling throughout and here are some of my favourite moments:
· ‘So it’s aliens? Aliens taking over the planet via shopping?’ ‘Don’t have to be trying to take over the planet, just cos they’re aliens? I’m not trying to take over the planet. The Cookie Monster isn’t trying to take over the planet. Well, not the bits that don’t involve cookies.’ ‘Cookie Monster is a puppet. He’s got someone’s hand up him and some bloke does the voice!’ ‘You humans are so gullible.’
· ‘Cos it would be so awful if we got a bit embarrassed while we were trying to save the world.’
· Page 48 is a wonderful piss take of Charlie and the Chocolate Factory!
· ‘Are there really alien bondage sites?’
* It raised its nose in the air like an ugly, spiny Bisto kid!
· Rose realises the difference between life and death is one pound and fifty pee!
· ‘500 quid. That’s how much death costs off the internet. Not much more than a widescreen telly.’
· ‘These aren’t porcupines! Porcupines don’t, contrary to popular belief, shoot their quills at you. They don’t walk upright. They don’t carry little laser guns. And they don’t, whatever David Attenborough might tell you, kidnap human beings and teleport them to an alien planet!’
· The TARDIS lurched violently like it had given ‘an enormous hiccup.’
· ‘He’s got something called a tarpit, or something.’
· Rose’s solution to the Quevvil/Mantodean war: ‘Have you ever thought of, you know, just trying to be friends? Or you could just put up curtains so they don’t spoil your view…’
· The Atallus’ are in their sixties. Practically dead. They hold hands, which was pretty disgusting for people of their age.
· I was laughing my head off as Rose, under the control of the Doctor, was pushing her nose closer and closer to a bloody corpse…
· I loved the phone call the Doctor makes to Mickey 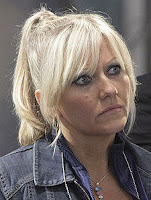 using Rose’s voice…she can’t talk using her own voice and the Doctor can’t hear his answer!

Result: It’s more of a case of one step back and two steps forward. Whilst this is a book that is clearly aimed at children with a simple, clichéd plot where it scores is in its bright, breezy amiability and its energetic and fun approach to storytelling and characterisation. This book simply flies by with charismatic characterisation for the ninth Doctor, Rose, Mickey and Jackie. There are enough edgy moments (Jackie’s bruises, Darren’s decapitation) to keep adults interested but what really worked for me was how it captured the glee of the child in me, games gone bad, scary porcupines and people being kidnapped on an alien world. Jac Rayner shows how you can simplify these books without taking away any of the enjoyment. Whilst some of you might reel in horror because this doesn’t juggle the fate of alternative universes, feature the Doctor suffering a schizophrenic crisis, have companions who have copious amounts of sex and deal with how much the Doctor screws things up on his travels…this is one of the most delightful Doctor Who reads and left me feeling happier than 90% of any of the other ranges output have. I feel no shame in giving this ray of sunshine: 8/10
Posted by Doc Oho at 14:27