Lance Parkin Q & A Part One 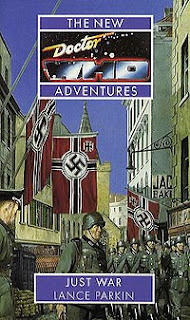 How did you come to write for the New Adventures? Was this a natural progression from your fanzine days or was your submission when the lucky ones that were chosen for print?
This is a really boring story, I’m afraid. I read a New Adventure that I thought was rubbish, knew they had an open submissions policy, sent away for the writers’ guide, came up with some sample chapters, Virgin liked them and they ended up as the first three chapters of Just War. That was the first fiction I’d ever written. In the year between me submitting it and it being published I wrote a Doctor Who novella, Snare.
Tell us a little about the conception of Just War. What made you decide to torture Bernice out of the three regulars? How much research was needed to write a historical novel?
It was originally pitched for Benny and Ace. Ace was going to do what ended up as the Benny stuff, Benny was the one in London doing the Roz and Chris stuff. I really saw it as a showcase for New Ace, and based all the plotting and narrative thrust and stuff around Ace. Then it sat in the slushpile for a year, and Ace left. When I heard that she was going, I thought ‘well, they won’t want the book now’, but they did. And the sample chapters had Ace in disguise anyway, so it didn’t need all that much changing (I think if you reread those chapters, it does still sound more like Ace than Benny). So Benny ended up being tortured because Ace would have been. Sorry, that’s a really prosaic reason. She had to do the Ace stuff because Chris was a bloke and Roz was black, so neither of them could plausibly go undercover in the Channel Islands.
Benny’s a fun character to write for – I’ve actually got two Benny things out imminently from Big Finish: Company of Friends, where she meets up with the eighth Doctor again, and Venus Mantrap (a co write with Mark Clapham) which is a direct sequel to Beige Planet Mars. I do feel a bit guilty about torturing her, though, so she’s tended to have a whale of a time in my stuff since. Mantrap is fantastically filthy and features some Lisa Bowerman heavy breathing action.
Research … it was quite easy, because it was such a focussed book. Loads of stuff about wartime London, and that was really easy to find stuff about. I am probably the only person in history who bought The Camomile Lawn on video for the costuming and set details rather than its other charms. The Nazi occupation of the Channel Islands is – forgive me – something of a footnote in the history of the Second World War. It’s tempting to see it as exactly like Vichy France, or what would have happened to mainland Britain if the Nazis had invaded. But it wasn’t like that at all. It really is this unique situation, where the territory didn’t really have any direct strategic value, where the local population wasn’t persecuted. Most WW2 books don’t really mention it, which means that the ones that do concentrate on it.
It really was like a Pertwee era story – evil alien invaders landing in this sort of microcosm of a sort of idealised Britain and instead of death rays and explosions, they ended up having arguments in the street with bank managers and camp old ladies. Which, er, trivialises the situation, I know. I don’t think Doctor Who could do the Holocaust or Stalingrad, I doubt it could even really do the Battle of Britain or the D-Day landings. You can’t really have the Doctor helping the Dambusters, either, it just negates the hard work of the real people involved. So you can use it as backdrop, like The Empty Child does, or do a parallel universe fantasy Hitler story, which was Timewyrm: Exodus. The Channel Islands was the one place where you could do Doctor Who Fights Nazis and get away with it.
Moving onto Cold Fusion. I have to ask about Adric. You are one of two authors that attempted to bring him alive in print. Was this especially difficult? Why were these two sets of regulars brought together? Can you tell us something about Patience. 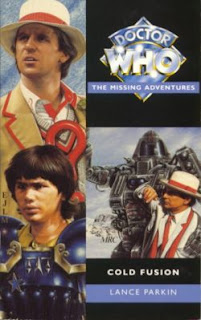 The tricky thing was distinguishing the four characters in that line up. Their characteristics all overlap, like some Venn Diagram. Adric, Nyssa and the Doctor can all do science stuff; the Doctor, Adric and Tegan can all get petulant; Adric, Nyssa and the Doctor offer the non-human perspective. And so on. On TV, the three companions tended to smoosh together rather than get distinct personalities. I tried my best to do the opposite.

Adric wasn’t all that much of a challenge – the thing I latched onto was the idea that as Tegan and Nyssa were new and there was a new Doctor, Adric thought of himself as the senior member of the crew. A bit like how currently David Cameron is, by far, the longest-serving leader of a major UK party. The entertaining thing about Adric was always that he took himself far more seriously than everyone around him did, that he genuinely seems to think he’s in a show called The Adric Adventures. So I played up on that. And the idea of teaming him up with Roz, basically this grizzled Nubian Judge Dredd with a gun bigger than Adric is just amused the hell out of me.
The original idea for the book, which gets lost a bit, is that there’s a planet at war, the Doctor and his companions land, decide who the good guys are and helps them overthrow the evil monsters. Then, on the other side of the planet, another Doctor lands and decides that the other faction are the good guys. So the Doctor ends up fighting a war with himself. The seventh Doctor was the one who’d see the bigger picture, the fifth Doctor was the most empathic, so they were natural opponents, I think.
Patience is the Doctor’s wife, mother of Susan’s father. She appears in Cold Fusion and The Infinity Doctors. She’s a very, very old Time Lord, one from the days of Rassilon. Millions of years before the Doctor’s time, she was married to Omega and probably having an affair with the Other. Those old school Time Lords were like Olympian gods – truly immortal, taller and stronger than human beings. That race of immortal super-people died out following the fall of the old system, the revolution one of them, Rassilon, initiated. They were replaced by loomed Gallifreyans, ones who ‘only’ lived for a thousand years, so had to regenerate when those bodies wore out. This process was overseen by a particularly bureaucratic and unadventurous Council. After Rassilon died, a number of pretenders to the throne emerged and civil war looked inevitable, but it turned out that because the High Council controlled the Looms, they controlled Gallifrey. So things continued for millions of years. Patience lived in secret, posing as a loom-born Gallifreyan, ending up as a tutor for the Doctor’s family. When the Doctor was older, they married and – much to everyone’s surprise – she got pregnant. She had thirteen kids. The High Council feared the Doctor’s family and when it became clear that the Doctor’s kids could have kids, they rounded them up. Susan escaped, Patience escaped. Everyone else was executed. The Doctor’s memory of this was wiped. Or not. The Doctor’s mysterious and very old, it was a long time ago. It might not have happened like that at all.
The Dying Days has a very important function in that it brings the Virgin New Adventures to an end and it allows Bernice Summerfield to leap into a new series of adventures of her own. How aware of this did you have to be at the time of writing, or were you more interested in just telling a good story? How do you imagine a Virgin Eighth Doctor series would have continued? What was it like bringing the Ice Warriors to life?
Oh, it’s a book commissioned with a set of very specific purposes, one of which was to showcase Benny, another of which was a blatant attempt to go out in such a spectacular way that Virgin losing the licence would be seen by fans as one of the great injustices of world history. 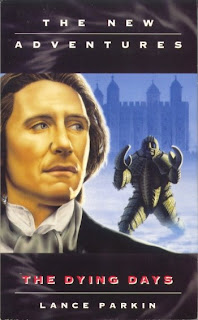 There were never any plans because Virgin knew they were losing the licence. I suspect you could reconstruct it from a mix of the early Benny books and the early EDAs that weren’t old Virgin rejects. If they couldn’t use Grace, they’d use Benny. They’d have done Oh No It Isn’t and Vampire Science. Ironically, I suspect they wouldn’t have done The Dying Days. They wouldn’t have done The Eight Doctors or War of the Daleks. The interesting question is what they’d have got Lawrence Miles to do – Down but not Alien Bodies, possibly. Rebecca Levene and Simon Winstone were keen on the Night’s Dawn books, and that mix of the supernatural and space opera. That ended up in the Benny books, but might have been the overarching story of the Virgin eighth Doctor range, at least for a while.
The Ice Warriors were really good fun to write. Big stompy monsters. I think that’s the thing the books could have done more often. We tended to come up with more complex, honourable opponents for the Doctor.
Alone in a Doctorless universe Bernice Summerfield is celebrating the 500^th anniversary of Mars’ colonisation in Beige Planet Mars. This book was co-written with Mark Clapham, can you tell us how your writing duties were shared? How did you come to write this novel with another author? 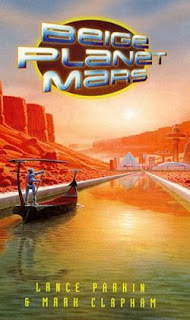 Virgin needed the book quickly, and Mark and I are mates. I had the setting for a Benny book (a sort of David Lodge campus novel … on a Mars that’s not this hotbed of revolution, like it usually is in SF, but is more like Margate or Florida, this gated retirement community) and Mark had the characters and story.
It was a while ago, but as I recall we divided it up with me doing the Jason Kane stuff and Mark pretty much doing everything else. Mark and I have similar writing styles, and we trust each other enough that we rewrite each other, so it’s not always possible to say who wrote what. I can never remember. We just did a sequel, Venus Mantrap, and I heard it this week for the first time and congratulated Mark on a particularly brilliant joke, one that was clearly written by a comedy genius, only for him to say I wrote that bit.
In Part Two Lance talks about his work for BBC Books; The Infinity Doctors, Father Time, Trading Futures and The Eyeless...