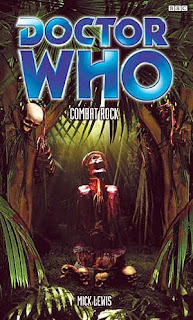 Plot: Ferocious cannibals, deadly swamps, hunting Dogs and tribal mummies await the Doctor, Jamie and Victoria on the island of Papul. Evil is stirring in the jungle and a long fought war between guerrilla tribesmen and colonial troops is about to come to a bloody conclusion…

Oh My Giddy Aunt: Of all the books to get Troughton spot in Combat Rock must come as close to his television portrayal. You can hear Troughton saying the lines, hopping about like a frightened flea, crying out with horror and acting with extreme embarrassment at the whole situation. His concern for Victoria has never felt so real. The Doctor’s face was lined and contoured by a life beyond strange, a facial map bursting with character and mystery. The eyes were dark, benevolent, childlike and slightly scary all at once. He can look comical with a disarming grin and childlike impish eyes. Whenever the Doctor got excited about something it invariably meant trouble. Was the Doctor really as simple as he liked everyone to think? There was something about him that generated respect. There was strength and compassion about him that was unlike anyone else. Keen intelligence and gravity too if the situation calls for it. The Doctor briefly wonders if the jungle is his purgatory, a place where he came to repent for his sins…and he had enough of those! The climax that sees the Doctor bravely face up to and outfox the revolting Krallik feels genuinely right for the second Doctor. Jungles (and the unknown) have always fascinated the him.

Who’s the Yahoo’s: Another superb piece of characterisation, Frazer Hines’ charm leaping from the page with real delight. Spurned on by Victoria’s beauty, Jamie is hornier than ever! However he only loves her like a sister. There is a very long action sequence all told from Jamie’s point of view that expertly sees the Highlander attempting to hold his in all the horror surrounding him. Much of the books humour comes from Jamie too, but head to Funny Bits for some great examples. Feeling helpless was the feeling he hated most in the world. He was always a man of resources, of instant action. He left the thinking to the Doctor whilst he took care of the practicalities.

Screaming Violet: Its another fabulous Victoria book. Combat Rock and Heart of TARDIS between them both present the best of Ms Waterfield and contain some very intelligent writing and using her background to enrich their respective tales. Victoria couldn’t help her straight-laced upbringing – she had been through much hardship. Her father had constantly reminded her she always had a bit of a wild streak and had a penchant for people and things that were out of the ordinary. Victoria feels ashamed of her closeted, imperialist upbringing. Childhood prejudices and impressions were hard to shake, even though she had made some monumental strides to do just that since entering the TARDIS for the first time. Then again she had never been one to adhere to the norm in the first place. Agus’ words remind her of a time of cosy security on her fathers lap beside the fire while he told tales of derring do and British integrity in barbaric climes. Victoria had never been obedient and rarely sensible but she could always be relied on to get herself in a mess. It was because she was brave and noble and did what she really shouldn’t do. Victoria thinks of the Doctor and Jamie bickering in an affectionate way – Jamie exasperated and headstrong – the Doctor daunted by events. She can see through the shallow philosophy of colonialism…what would her father think to hear her having such unfashionable, alien views? Maybe, secretly, he would approve…

Twists: The book opens with a child being shot through the head and snakes leaping from a Mumi and slaughtering a tourist group – a sign of things to come. Revoltingly, Pan shoots a hooker through the head when he’s finished with her. The Kill Crew: Pan, Pretty Boy, Saw, Grave and Clown are all thoroughly loathsome. The sequence where Father Pieter looks over Agat and sees beheaded men and dismembered wives he realises the jungle has reclaimed its children. The Doctor and company is captured by the OPG rebels, those who oppose the Indoni rule of Papal. The image of a reed bed of heads, rising above the water, shrouded in bloody pink mist, is horrible. In a book that is primarily grotesque the scene where Agus takes Victoria to the moonlit beach to show her the wreckage of the Earth/Indoni was is strangely beautiful and haunting. The first scene of cannibalism is stomach churning – Baccha and his wife smashing open a trader’s skull and spooling out grey matter. The Snatcher attacking the bridge is brilliantly tense. We feel every one of Budi’s multiple stab wounds to the neck. In a scene of such obscenity I had to stop reading and catch a breath – Julius questions Pieter’s faith in God and forces him to ‘Eat the flesh, drink the blood’ by working a hole in Thomas’ severed head with his axe and force feeding him brain matter. In a horrifying follow up scene we see Pieter, devastated: “I have eaten God.” Ussman roasting on a spit, one of the cannibals slicing away part of his belly is enough to turn your stomach. Santi is to be their chief’s tenth wife…and Jamie is to be killed and eaten to celebrate! The puppet Krallik is disgusting, head of a missionary, body of a merchant and hands of a prostitute. The Doctor figures the real Krallik is Kepennis, driven mad with revenge at the death of his family and friends at the hands of the Indoni. He set up the Mumi’s to spit out snakes, he set up the OPG and he set up the dissicated Krallik puppet to give his cause a symbol of hatred. Pleasingly, all of the Kill Crew suffer agonising deaths. Except Clown, who in the satisfying last scene kills the evil President Sabit.

Funny Bits: After a cat fight between two ladies over Jamie, Victoria notes: “Well Jamie it seems like you enjoyed a very busy little Highland Fling last night, doesn’t it?”
“Huh, women always get bum deal!” Santi exclaims, after the ladies in the tent are offered a slice of buttock. Oh come on, it is funny in a twisted way.
Jamie’s attempts to avoid being eaten: “I’ve got very tough thighs!”

Result: Wide Sargasso Sea meets Ravenous in this shocking, eviscerating piece of fiction. I thought at first this would be less to my tastes than Rags but Combat Rock is a horror novel that genuinely manages to horrify, a rare feat. This is an intelligently written novel with some excellent world building and complex things to say about colonialism. A book dripping with atmosphere thanks to Lewis’ sweaty, bloodthirsty prose, he manages to make writing about death both repulsive and artful. The plotting appears loose but the climax reveals some nicely hidden clues and twists. It is easily the sickest Doctor Who book ever written, Rags dealt with humans forced to commit terrible acts, the frightening things about Combat Rock is that it deals with genuinely sick people passionate about killing. Disturbingly in this viscera draped setting, the Doctor, Jamie and Victoria shine like never before: 8/10
Posted by Doc Oho at 10:07