The Deadstone Memorial by Trevor Baxendale 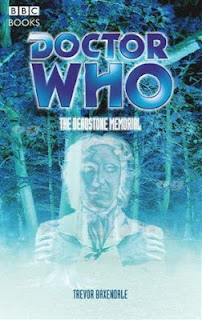 Plot: Cal McKeown is suffering from terrible nightmares. He wakes in the heart of the night, blood seeping from his eyes, screaming obscenities and flinging himself bodily into the furniture. His mother is at her wits end until a stranger rushes into her life. A man with a Gladstone bag full of sweets and comics, a man with a million and one crazy ideas, a man who calls himself the Doctor…

I love how he shamelessly parades his theories to Hazel, offering up comics and sweets instead of medicine and rants about other planets much to her dismay. He is soft but has a self-confident look that says he can be tough when he needs to be. He is extremely attractive and charismatic here and exudes something magical. Its lovely to see him in such a domestic setting, especially when Hazel comes home to find him preparing the dinner…he is like what has been missing in their lives. He has a way of making you do things you wouldn’t usually contemplate. Fitz asks him why they are bothering with something as small scale as the McKeown’s to which he answers, “It’s a big universe out there, but the important thing in any universe is the people. They’ve got a problem and we can help, what other reason do we need?” There is a glorious scene where the excitable, childlike Doctor drags the stoic Hazel out onto the roof to wave at the stars, he is unpredictable and thrilling leading to Hazel commenting, “You’re the most amazing man I’ve ever met.” He loves the Earth and doesn’t know who or what he would be without it. He has been feeling of later as though there is something inside him that wants to be free. He is hard to dislike although there is something slightly scary about him, like there is something awful to follow. He’s a scientist, an inventor, an explorer, a swordsman and he plays the violin. He makes a psychic barrier out of a CD Walkman and a colander! Hilariously, as they are chasing the ghost the Doctor asks a passer-by if he’s seen it saying, “It has teeth like this, you couldn’t miss him!” and demonstrates with his fingers! It is lovely how he is deeply concerned for not only the people in this story but the animals too, devastated when he thinks Milton the Mutt might be skinned alive by the rats and then heartbroken when the rats start dying! He is the presence that gives you hope your entire life, he always makes things better. The TARDIS feels bereft without him. It is glorious to see his magical affect on the McKeown family, gaining their trust, defeating their monsters and opening their eyes to the wonder of the universe.

Scruffy Git: Fitz is scared of being on the Earth because when the time comes he might find he wants to stay. In a scene that demonstrates how much they are made for each other the Doctor and Fitz shout out their favourite ‘Earthy’ things including black pudding, snow on a Christmas morning and beautiful women. He likes to pretend he is a wuss but displays many brave acts here. He loves the TARDIS, it has been his home for as long as he can remember and he cannot forsee a time when he isn’t with the Doctor. His previous life is like a distant country, one which he has no intention of returning to. The climax of the book, where the Doctor is apparently missing forever has a very profound effect on Fitz, he doesn’t know what to do and wanders the TARDIS like a lost soul. His love for the Doctor beams out of every page in this book. 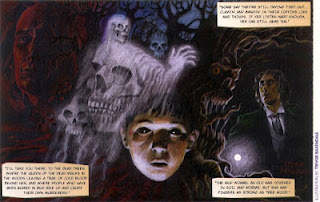 Identity Tricks: Even Trix is getting into the family spirit, finally loosening up, growing closer to her two friends and getting into the domestic spirit of the story. She even feels hurt when the Doctor accuses her of still only helping out for a profit, after everything she has done for him. She feels she knows the TARDIS pretty well but lately there is a feeling of apprehension in the air, like the future is holding its breath. In a very revealing moment she phones her mother to see how she is, letting her guard down totally. Later she phones Anji and arranges to send her a copy of next years Financial Times, apparently out of concern for her and Chloe. Described as tough as old leathery boots. Fitz thinks she just travels with them for a sight seeing tour of the universe and she is preparing to move her stuff out of the TARDIS at the climax when it looks as though the Doctor is not coming back. In a moment that surprises both Fitz and herself, she nervously offers to let him move in with her.

Foreboding: Fitz wonders why he always jumps at the Doctor’s commands. He and Trix are getting much closer lately. We get another glimpse of the ninth Doctor, this time as a ghost in the TARDIS console room. Trix sending Anji next year’s paper is part of lovely scheme, revealed in The Gallifrey Chronicles.

Twists: The opening scenes portray nighttime as a truly foreboding presence. Cal’s attacks are haunting, flinging himself around the room; eyes drained of colour, screaming out for help and choking himself to death, his tongue protruding obscenely. The Doctor and Fitz standing on the writhing, pulsing mud by the Deadstone memorial as the insects try and escape is horrible. The Doctor, Fitz and Trix investigating Crawley’s filthy cellar is great fun, the three really working together well as a team. The Doctor’s nightmare, blood flowing down his face as his skull splits open like an egg and a blood-slicked rat emerges, is brilliantly nasty. When Fitz breaks his wrist the Doctor does a fabulous hypnosis trick to stall the pain but in a lovely moment it catches up with him and he screams out. Hazel and Cal stepping into the TARDIS manages to recapture that awe inspiring wonder of the craft, especially Cal’s childlike delight at such a craft. The tree creature is sickeningly vile, eyes like wet grey toadstools, a gaping mouth in the soil revealing sharp teeth and gnarled, mud streaked tongue. Things get remarkably bloody towards the end…Crawley gets shot at point blank range, Harris is mauled by Milton, Cal screamed and thrashed and blood welled from his eyes until they looked like blackcurrants swimming in their own crimson juice. The action moves underground where Hazel finally gets to confront the creature that has been tormenting her children, like an after birth, spawned from the Earth itself. Eek rats! The Doctor and Fitz are attacked by a seething torrent of frightened, filthy, angry rats! When the alien crash-landed it split into two beings as a result of the trauma. The psychic energy ended up buried in the mud and the other half was stuck between dimensions. The creature was attacked and buried by Deadstone and it clutched at anything, soil, insects, tree roots and merged with them and took on a strange uniqueness of its own, driven insane. Deadstone fed it animals and children to keep it alive. Hazel slices its head open to reveal a nest of grey worms boiling inside. In the brilliant climax the beast tears free of its underground prison and Deadstone ages to death before them. The image of the Doctor, Fitz and Trix running off to the TARDIS laughing, heads full of dreams, is lovely. But nothing could be more beautiful than the last line as Hazel takes her children out into the evening air and waves up at the stars knowing that somewhere up there he will be waving back. 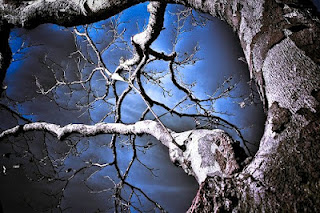 Embarrassing bits: Despite the excellent drama caused by the Doctor’s disappearance, his sudden re-appearance is skipped over a little too easily. For somebody who has made the ultimate sacrifice and will never be coming back from the other dimension he just sort of…appears.

Funny bits: The Doctor has been playing a game of chess against himself (“I think I’ve nearly beaten myself but I’ve got a few tricks up my sleeve that I haven’t spotted yet!”). His name-dropping the planet Kufan is hilarious (“You HAVE heard of it!” he cries at a dismaying Hazel!).

Result: Excellent, easily the best thing the ever improving Trevor Baxendale has written. It is a truly visceral horror story with some brilliantly disgusting moments; blood, mud, bones, rats and worms used to sickening effect. I love the fact that we never find out where the story is set and the gloriously mundane domesticity of the tale makes the supernatural aspect all the more frightening. As a character tale it works because the McKeown’s are so instantly recognisable, as a monster tale it is perfect because Crawley is loathsome and the soil creature is memorably vomit inducing and as a reminder of how magical the Doctor is it is practically unbeatable. This isn’t great literature but it is a fantastic story and written with relish, impossible to put down and delightful from start to finish. Rather than limping home the eighth Doctor is going out is fantastic style: 9/10
Posted by Doc Oho at 08:23 No comments: