Plot: The Doctor and friends arrive in the picturesque town of Arandale to discover a string of murders. Things are dangerously wrong…superheroes are committing suicide, Adventure Kids are falling into real danger and priests are attacking people with knives…

Master Manipulator: The Doctor had been moody and sulky since leaving the Titanic like he had given up on everything, Ace especially. When he destroyed the Silurian Earth Bernice had comprehended how alien and amoral the Doctor was. He was no longer somebody she could trust, these days she felt as though she didn’t even know him. The Doctor seemed to have rules for everything – for other people to follow at least. His presence is unnerving. It was as though the Doctor could project whatever image of himself that he desired. The Master of the Land of Fiction tries to break the Doctor with guilt (preying on his feelings over the deaths of Sara and Adric), tries to appeal to his curiosity (he gets an invitation to the Mad Hatters tea party) and even tries to question his existence (John and Gillian appear and proclaim him Dr Who!). There is possibly the best ever criticism of the seventh Doctor in the New Adventures…and it wasn’t made by me: “Mind you Doctor. I have to pull you up on one or two points, I’m afraid. Your sense of humour for a start. I mean, that other persona of yours was such a light-hearted fellow, always good for a laugh and a joke. I’ve watched your first adventure here hundreds of times and I never tire of his clowning and his witticisms. I was so looking forward to having him back here, t using him in one of my stories, but all I got was you with your moods and your tantrums and your oh-so-precious secrets. You’re no fun anymore, Doctor.”

Boozy Babe: Yes! Yes yes yes yes! This is Benny! Lets face facts…besides proving that Doctor Who could work in an adult novel format the NAs greatest gift to Doctor Who was Bernice Summerfield. She’s not been used to one tenth of her capacity so far but it would appear that Steve Lyons has figured out exactly how she should be portrayed. It’s the best use of her character since her introduction. Benny is compassionate, intelligent, quick-witted and intuitive. She is thinking of leaving but she doesn’t know if she can confine herself to one place, one time. Her relationship with Norman Power is really sweet, reminding him that you don’t need to have superpowers to be a hero. Bernice is struggling to cope with the Doctor’s secrets and Ace’s tantrums…she has reached breaking point. She tries to talk to Ace in this story and for a while they seem to be getting closer but after she speaks to the Doctor about their heart to heart Ace takes it as a betrayal and things are worse than ever. 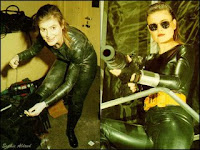 Oh Wicked: This book was heading for a 9.5 mark but unfortunately Ace was responsible for the mark it actually got. Her very existence can drag books down…its so annoying. Whilst Conundrum does some extremely clever things with her character…the character itself is just so damn irritating, spouting out dialogue like, “Just get the hell out of my life, you bastard!” Ace is a bit of a cold bitch (that description is in the book!). She’s seen a lot of things, fought a lot of fights and killed a lot of people too. She doesn’t talk much nowadays, not about herself and she keeps her feelings well hidden behind her mirrored glasses. Nowadays the TARDIS crew communicate on a purely functional level…mostly thanks to Ace. Stupidly, she throws a tantrum when the Doctor suggests Benny sleep in with her…showing how childish she really is. She’s playing the Doctor at his own game, refusing to leave the board until she’s beaten him just once. She used to trust him, he was the only one she trusted, he guided her, protected her but it was all part of a game with the Doctor in control of her moves. Ace was the pawn he used and abused. People she loved he sacrificed. She knows he has saved lives but he has ruined some too. She joined up with IMC so she could play against him but when the time came she couldn’t go through with it. As much as she hates him…she still loves him. She can’t leave him; she can’t get the Doctor out of her life. Unfortunately after revealing all this healthy character development…Ace becomes more ridiculously angst ridden than ever.

[All this talk of reality does make you think? Doesn’t it? Conundrum questions the reality of fiction in very clever ways. It really brings things home…like this very review. In reality…why am I reviewing this book? Books are supposed to be an intensely personal experience…why plaster your thoughts over several pages of a forum? Do I want peoples approval of my opinion? Thinking about it…why are you reading this review? Why aren’t you reading the book rather than someone’s opinion of it…an opinion corrupted with all of my quirks of personality? Is this review a true representation of Conundrum? In a way…you are reviewing my review. And if you comment on this blog about my review and get a response…that person is reviewing your review of my review!!! Yes, I’m talking to you…yes you…the one gawping at their monitor right now. Do you realise that you are reviewing my own review of my review. Gee this is fun! Conundrum does this very well…as you read through its pages you feel as though the writer (not Steve Lyons) is making up the story as it goes along specifically for you. Just as im doing with this review. Now go and have a good lie down and think about nature of reality and if you are really real or just a figment of my reality…if so you’re a damn attractive one*wink*] 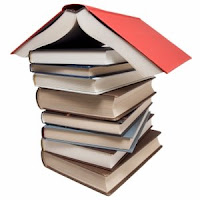 Incredibly Clever Plot Conceits: Conundrum is so full of clever moments I feel compelled to list my favourite bits…

* ‘Still I don’t suppose you want sixteen pages of me psychoanalysing her to death’ The Writer hits the nail on the head…unfortunately he does go back on his word. Nobody wants to go there with Ace.
* ‘The significance of all this I don’t yet know, but since we hadn’t seen that character since chapter one, I thought I better remind you that he existed.’ Cheeky devil.
* Brilliantly Ace sprints out of the world the Writer has created into…well, actually, he hasn’t decided yet.
* Pages 92 explains the power of meanwhile…by using that word the writer can leave Ace where she is…and then return to her later when he has decided what to do with her!
* ‘It might spoil my continuity just a tad.’ Huh, like that stopped a Doctor Who writer before!
* ‘Can you believe that? I can’t make anything up – no matter how ridiculous it seems at the time – without this idiot thinking he’s got a rational scientific explanation for it.’ The poor writer is attempting to make his story fantastical…and the Doctor keeps finding explanations for his concepts.
* Page 146…Ace figures out what is going on and flings herself out of the world.
* Page 151 sees the writer hopelessly improvising…trying to salvage some sort of straightforward plot line from the mess Ace has left him in!
* “And if I was to place you under arrest?” “That would be a very boring plot development. It’s been done.”
* ‘Just a minute…I didn’t write that!’ “No, I did.” Brilliantly the Doctor confronts the writer of this story…writing his own words of fiction.
* Pages 208-209 canonise the comic strips within the world of fiction (‘I even used some of your real companions, just the ones I liked.’)
* At one point the Doctor reads Conundrum! He reads exactly what we are reading! Gah! My head is going to explode!
* ‘We’re into the last four chapters already!’
* “You mean there’s actually someone out there reading this?”
* “When this book closes – we’ll be trapped in its pages forever.” Afraid so.
* “Dramatic convention, this is the end of the chapter, no doubt. I assume we’re due for a cliffhanger.”
* The Doctor doesn’t like the ending, its too pat so he creates a new one.
* Ace is judged by a panel of readers: ‘You are no longer of interest. Your audience are bored. Your continued existence in this series will not be countenanced.’ Oh Steve Lyons I could kiss you all over!
* ‘Obscenities too! In a book deemed suitable for consumption by minors!’
* In a truly amazing sequence Ace sees her life in written form…books called ‘Dragonfire’, ‘Love and War’ and ‘Deceit’. She weeps letters…words of pain bleeding into the pages of her books. What a brilliant metaphor for all the pain Ace has brought to the NAs.


Result: One of the cleverest books I have ever read, playing with the reader in the way only a book about fiction can. From the first page you feel as if you are being manipulated and guided through the book and it turns out to be a hell of a ride. In amongst all of the narrative tricks there is a murder mystery plot; some surprisingly grisly moments and another strong example of the current emotional crisis the TARDIS crew are going through. A return visit to the Land of Fiction was long overdue and it works doubly well in this arc…what with the attention on twisted timelines. The prose is light but very readable and perfectly suited to its brisk and twisting tone. Bernice is superb but Ace is appalling, I would have marked this book even higher if it wasn’t for the few scenes she behaves like a spoilt brat. Steve Lyons has written a superb New Adventure, only triumphed when he re-wrote it to even more perfection in the classic EDA, The Crooked World: 9/10
Posted by Doc Oho at 23:30