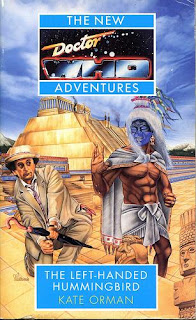 The Left-Handed Hummingbird by Kate Orman

Plot: Following the events of Blood Heat and The Dimension Riders, someone is tinkering with time, altering the Doctor’s past and forcing a race through time to paper over the temporal faults. From Mexico 1487, to London in the swinging sixties through to the sinking of the Titanic…

Master Manipulator: The Doctor is a shadow amongst shadows. Normally he was in and out of people’s lives so quickly that he didn’t get to see the long-term effects of his handiwork. Life was a series of hellos and goodbyes. The image of the Doctor juggling his way through an Aztec market is way cool. Does the Doctor think he is God’s police? Or is it just a bad dose of messiah complex? Was he ever afraid the same way humans are afraid? If he wasn’t God himself, he was a manifestation, a splash of colour spilled into the picture book of the ordinary world. He is an extraterrestrial who poses as a human…a harbinger of death. There’s a brilliant sequence that sums up the seventh Doctor beautifully…his companions are agonising over one death whilst he has a much bigger problem to consider: “Cristian Alvarez is not the be and end all of this situation. Something is happening which is much bigger than Cristian Alvarez. He’s dead in 1994. It is now 1968 and its snowing outside, so bring something warm.” The Doctor has no home; he wanders from place to place. He walks the fine line between healer and warrior. He was going to have to do something about the violence in Ace.

Boozy Babe: Benny always works better by herself. She was the archaeologist and doesn’t figure why she cannot go back and see the Aztecs. Bernice feels homesick for Beta Caprisis, the Academy and even Heaven before it became Hell. She was lost in an utterly alien city where she didn’t even speak the language. She feels alone. It always comes back to that; you meet people, you exchange a few words, a few ideas, maybe a little love. And then they move on. She hated evil and had seen a lot of it and felt as if she had been fighting it forever. The Doctor’s celestial game had been fun but now it was going sour. It occurs to Benny that if Ace considered people to be a threat, she actually would kill them. She feels more at home with the hippies than Ace.

Oh Wicked: The image of the invincible Ace in hospital in critical care is a potent image. Is Ace just a soldier following the Doctor’s orders? When she feels this might be the case she wants to throw her gun at the Doctor. Ace the fighter, Ace the killer, the Doctor had tried to search for the enemy in her eyes but the Ace who had wielded the sword was his Ace. Ace’s life came in two pieces, before Perivale and After Perivale. She remembered when she first met him on Svartos, that thrilling of a chance to hitchhike the galaxy. She had felt incredibly lucky, very privileged. When the stakes got high enough it was easy to concentrated on saving everybody, and forget about any one person. It was just as bad to destroy a single person as it was to destroy a whole planet. Even when that person was you. Especially when it was you. When she had run away from him on Heaven, it had been the worst thing she could think to do to him, the worst possible punishment for his sins. He wasn’t scared of monsters or pain or dying, he was scared of being alone. If he was going to die, he wasn’t going to die alone. Ace feels like a paper doll, dozens of copies of her cut out and scattered about. Ace has had the stuffed knocked out of her, emotionally and physically until she felt she was hollow. She was here to protect the Doctor, he would never give up his crusade but this might be the time for Ace to leave…while he still had Bernice. Ace was ready for peace. Fighting was like breathing for her now. I loved the following exchange: “You don’t want me to turn into the Halloween Man?” said Ace. “No” he said, “You’re perfectly capable of doing that yourself.” With speed that ever surprised her, Ace belted him.

Twists: The depiction of the Aztecs is terrifying and beautiful. The Doctor’s drug induced nightmare is haunting. The Blue is a psionic being who using the power of an Exxilon device has become pure mental energy. Huitzilin exchanged places with the Doctor and slaughters the cultists.

Funny Bits: Cristian has to explain to Bernice that Star trek: The Next Generation is not a documentary (see also, Embarrassing Bits).
There’s a great moment where Bernice is torn between a phone ringing, a man screaming and her split tequila.

Embarrassing Bits: You’ve got to love how much controversy surrounded this book at the time with the Doctor (Shudder! Gasp!) taking magic mushrooms to contact the Blue. I was 13at the time this book was released and I have to say after reading it I was a regular user and always high as a kite trying to contact mind controlling aliens. Christ! Give children some bloody respect! The Doctor has since murdered people (The Burning) and married and set up shop in a whorehouse (both The Adventuress of Henrietta Street) but nobody got in a tizzy about that. I don’t get that Benny doesn’t know what pizza is, asks how to turn a cat off and doesn’t understand that ST: TNG is fictional…not really a fault of this book but of the range in general because soon she is au fait on all things 20th Century. One thing that really, really, really bugs me is books which refuse to actually explain what is going on and instead paper of explanations with lots of pretentious dialogue and enigmatic descriptive prose…The Left-Handed Hummingbird is the worst example of this since Timewyrm: Revelation. People proclaim that this is really deep stuff that you need to examine closely to unlock its meaning…I call it a lazy lack of respect for your readership. I don’t want miracles. Just a story that bothers to explain what is happening as it trundles along. This book waits until pages 180 onwards to give you any kind of a clue.

Result: I am so conflicted with this book because it does so many things well and so many things appallingly that on balance it is a deeply frustrating read. On the positive side I don’t think the regulars have ever been better written (just head upstairs and read those profiles) with Ace especially given some amazing development that (almost) makes her character palatable. The actual prose itself is a world away from the last book and many scenes are sculpted with care, punching with dramatic effect and setting the scene with vivid beauty. The trouble is all of this is lost on another rambling and aimless plot that lacks cohesion until very late in the day and worse, lacks explanation. Kate Orman would go on to write some of the best ever Doctor Who books and it is clear that she has much to achieve in her first novel but its too much. Too many settings, too many characters (very few of which are given the page space to make an impact) and too few answers. Halfway through I was incensed at the aimlessness of the plot. Flawed but definitely a step in the right direction: 7/10
Posted by Doc Oho at 11:23