Plot: There are serious troubles for the new colony on the water planet of Coralee, mysterious deaths, homicidal war creatures and a war fleet hanging in space. The Doctor is drawn to the underwater archaeological sight, fearing the answers to the puzzles might lie down there…

Master Manipulator: In total contrast to the authors’ last treatment of these regulars there is a sudden lack of focus on what they are going through, barely glimpsing inside their heads in favour of their huge action plot. A shame because they did show a strong indication of how their minds ticked but unfortunately this back to standard Doctor and Ace, heroes of the universe, fighting monsters and saving the day.

Saying that it is nice to see the seventh so involved in the action and not hiding on the sidelines manipulating events. He is in the thick of it throughout, performing the sort of stunts you would expect from Pertwee’s Doctor. The events of Matrix shook him up badly and things haven’t been the same since between him and Ace. It scared him that he could have become the Valeyard. He has an endless array of useless facts at his fingertips. Not for the first time the Doctor marvelled at how such fragile creatures (human beings) could have survived so long when the universe continued to throw up enemies that were better armoured than them, more vicious, more ruthless. There is a nice scene where the Doctor has to mentally prepare himself for wiping out the Krill and tries to find a space in his subconscious to store the guilt but realises it is already full of pockets of guilt. His reaction to Holly’s: “If there are still people trapped in the corridors?” is “Then it will be quick.” There is something strange about the Doctor but you feel more at ease with him than anyone you’ve ever met.

Oh Wicked: Too often Ace followed the Doctor blindly into situations he could barely control, her blind faith giving her courage. The Doctor attempts to compliment Ace: “If this is how you are going to dress from now on then I’m going to have to find us a better calibre of villain to fight!” The meal between the two of them is nice because the Doctor realises she is now an elegant young woman and not the fiery teenage he had first met. Ace: “The last three years have been…well, I still can’t believe what they have been like. You’ve taken me to my past and future, you’ve shown me planets I couldn’t even begin to dream about. I’ve met monsters and criminals; I’ve held Excalibur…I’ve travelled in Time! Do you really think that if someone had giving me a warning, that if someone has sat me down and told me a strange man was going to turn up in a police box, and he was going to take me travelling in time and space, I would have said no? Yes there are dangers…but for God’s sake, people die crossing the road. Life’s too short to live like that. I stay on my own terms, Professor. If I’ve ever got a problem with it I’ll let you know.” She is rebellious, loyal, determined and brave. The headstrong teenager had changed; every day she spent with the Doctor she learnt something new.

Foreboding: The dreaded Krill that debut in Storm Harvest will turn up again in the Big Finish story Dust Breeding. The Braxiatel Trust? 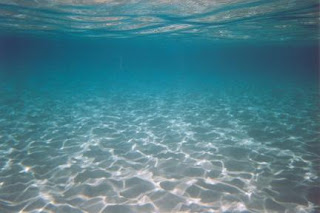 Twists: There is a gripping underwater opening, which immediately give this the impression of movie script turned book. The Krill attack on the sub is terrifying, they only escape because they lure an eel out of its nest and as it is torn to pieces they ascend to the surface. A body is found underwater at the ruins (the ruins themselves are a lovely image, a protective bubble allowing them to explore the seabed). A biogenic weapon is hidden in the ruins protected by a disruptor and a sonic blast; the latter causes a rockfall, which nearly buries the Doctor. Ace and Rajid discover an injured Krill, which bursts to life and survives bullets, a flare in the face and an engine smashing down on it. The Krill are a living weapon, created by people who once inhabited Coralee. When their life is almost extinguished the Krill can return to their larval state and heal itself. The legends go that the ancient masters of Coralee loosed the Krill upon the worlds of their enemies and laid waste to them, attacking everything they came into contact with. Garrett eats a Krill and kills Edwin Bryce. The Krill thrive on radiation and their eggs are in the ocean as a nuclear sub goes critical… The Krill bursting from the sea and attacking the defensive shields, accessing the colony via the dolphin canals and in particular the breathless action sequence that spans pages 157-160 is all tremendously exciting and the best part of the entire book. Phillip Garrett is a long-term Cythosi agent, the siting of the colony on Coralee, having Garrett as the chief engineer was all planned according to the design of Cythosi high command. The end of part three is excellent, with the nuclear reactor exploding out at sea in a mushroom cloud, promising more Krill to come! The Doctor transmits the Krill eggs onto the Cythosi cruiser and they set upon the inhabitants with terrifying relish. The Doctor crashes the ship into an asteroid field and covers himself in segments of Krill egg and manages to survive the plunge into Coralee’s atmosphere. The Krill are now an ancient weapon, floating in space…

Embarrassing Bits: Anything Cythosi is hideously embarrassing, written with five years olds in mind. I could imagine a newbie picking up Storm Harvest reading these sections of lumbering aliens walking around saying things like “You dare speak to me like that!” and eating their workforce and having all their worst fears confirmed. The attempted rape of a male human by a male dolphin is not just embarrassing, its twisted.

Result: I still don’t get it, people are remarkably kind about Storm Harvest but this is clearly the weakest Perry/Tucker book yet, lacking even basic descriptive prose, substituting intelligence for violence and rarely bothering to tell their story in any depth from the characters POV. On screen this would be a dramatic treat, a big budget movie of destruction and terror but the biggest strength of writing a Doctor Who novel is that you can push aside the constant need to impress with set pieces and involve your audience in creative ideas and powerful characterisation and none of that is evident here. I really liked part three because the Krill are such a fabulous monster, slaughtering with unfeeling relish but the rest of the book read a lot like the NSAs, kiddie monsters (the Cythosi), kiddie inhabitants (the Dreekans) and kiddie prose: 4/10