Fear Itself by Nick Wallace

Plot: Farside Station fell into Jupiter’s orbit and split the Doctor, Fitz and Anji for four years. Now we get to see what happened, the Doctor and Fitz four years in the past trying to figure out what sinister experiments are going on on the station and Anji alone, four years in the future, trapped on the decaying station besieged by aliens…

Top Doc: The book is full of intense observation about each of the regulars, on the grounds of exploring their feelings and development it could well be the best Doctor Who book yet. He considers Anji his responsibility and if someone wants to hurt he wants to know why. Fitz thinks he should have learnt something about women in his 100-year exile but he is still as naïve about his charms as ever. There is a toughness to the Doctor that was never there before. He can dance but he won’t lose himself to the music. He is lucky, adaptable and curious. For those 100 years there was something cold and alien he refused to show people but now his friends are hurting he is ready to unleash it and let his darkness show. We discover when he killed Nepath he felt cold and divorced from the human race, he didn’t understand the good that people were capable of. There is a steel to him that is leading him to taking more risks but Fitz still recognises him as the man he trusts his life with. Although he does wonder if the Doctor can still be a hero without knowing who you are or what you’ve done. He realises all his current brain activity is being routed through his fore brain and there is a wall locking away something from him. He wonders how bad it can be to have it hidden away from him. At the books climax he knows who he is, has all his ‘current’ memories back, both good and bad, and tells Fitz that finding out about his old life can wait for another day. He just wants to be himself and have adventures. 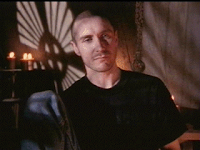 In the course of this book the Doctor is ‘burnt to the point of death, ejected, rescued, restored, mind wiped and drafted into Earth Special Ops.’ One of several astonishing twists reveals that the emotionless, violent, tactical and skilful Professional who is skulking about the decayed Farside station is in fact the Doctor. At the close of this book he regains all his old memories but remembers everything, every killing blow he dished out. Imagine Paul McGann, shaved head, broken nose, agile and deadly. How cool is that?

Scruffy Git: Not that smart but good with people. He thinks he was a chronic underachiever until he met the Doctor, the only man who makes him feel alive. He reveals he used the name Fitz Fortune because people remembered the war. The second the Doctor woke up on Earth he knew he didn’t belong there, now he’s back in outer space it all feels familiar but they are not what makes him sure of his life, Fitz is. Anji calls him the comedy sidekick but the amount of worrying he does for the Doctor here proves how much he loves him. He is too scared to tell him the truth about his home planet but keeps reminding him they need to talk. He’s scared his own memories are starting to fade (as set up in Earthworld).

Career Nazi: Besides Earthworld, Hope and Timeless, this is the Anji book. She is horrified at the opening, as the station plummets and with it her only hope of getting home. She used to have a sly fag on the quiet, a little rebellion her parents knew nothing about. She feels she didn’t know the Doctor and Fitz long enough to grieve their deaths. Being stuck on Mars helps her get over Dave’s death, with no reminders around her. She starts seeing a man called Michael and eventually they get married. She feels a part of her life is missing and she starts obsessing about the Fall. She misses her family and wishes they could meet Michael. She isn’t living the life she thought she would be realises you have to adapt to survive. Her marriage grows increasingly distant and she realises she has never moved on from the day she lost Fitz and the Doctor. Eventually they drift apart.

The climax reveals that all of Anji’s through the last four years have been filtered through the Fear virus that wants to head back to Jupiter and destroy its enemy. Thus her obsession with the Doctor and Fitz’s deaths allowed her to rationalise her return to Jupiter and interpret the virus’s goals. Her last four years are suddenly a dream fading fast as the Doctor repairs her memory and before she loses the last four years she tells Michael that she did love him. When she marries Greg (see Timeless) she has echoes of her life with Michael. When he begs her to stay, to try again she merely says, “Sorry, this isn’t my life.”

Foreboding: This book uses its ability to predict the future brilliantly, setting up some future twists. Fitz’s hazy memory starts here, the Doctor’s aggressive streak has a reason, Anji’s intense feelings about Dave’s death are highlighted because of her resurfacing memories. Anji says she wants to buy shares in 22nd Century, setting up her eventual scam in The Gallifrey Chronicles. When Fitz turns in the Doctor and tells him they were going to talk through everything, he is referring to this book.

Twists: The word twist was invented for this book! The opening is fab, Farside station plummeting into Jupiter’s atmosphere. Following that up with Anji and the Professional skydiving through Jupiter’s atmosphere! We realise Anji has aged four years and the Doctor and Fitz have been missing, presumed dead all that time. Farside station, decayed and decrepit, with mad people locked up (the Wounded) and makeshift quarters made out of hollowed out shuttles, is vividly depicted. The Doctor jumps into an area about to be depressurised to save a man. The relationship between Caroline and Robertson is gorgeous, the split time zone allows us to see the dizzy heights of their initial romance and the awkwardness between them after four years of war (“I can never get back what we lost” she tells him). They feel like real people in love. In an exciting sequence, the Professional and Anji are attacked by the alien aggressors and he blows of the fuel line and they crawl through the resulting explosion, which devastates the creatures. The Doctor and Fitz are blown into the vacuum of space. The Doctor and Valletti arguing over violins is brilliantly dramatic. You can feel the tension when Anji admits there never was a war to the survivors of Farside. Fitz punches Anji in the face and lights up a ciggie.

We realise Farside was creating soldiers without them ever stepping into the field, implanting memories that they think are REAL. As the Doctor investigates further, he realises there is a arms race on between the implanted soldiers and the Professionals…who will be more effective in bringing down potential alien aggressors? The Professionals are aliens that are aliens that are brainwashed into thinking they are human and press-ganged into fighting for the Earth. The soldiers are fitted with implants that gives they collected strength and confidence. To create a realistic aliens for them to fight in the simulations they have real aliens, trapped at the point of death in stasis, that they poke with a stick when they need them to react in the simulations. 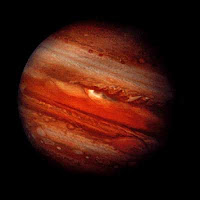 The Doctor is revealed as the Professional! Anji is Fear virus infected! There is a war going on between two viruses in Jupiter’s atmosphere, waiting for something to break their deadlock. Farside station is a giant Petri dish, over the four years it has been primed with a chemical that will eliminate the Fear viruses opposition. The station is a bomb, waiting to deliver its yield over Jupiter. The aliens on the station are revealed to be the 101st, mutated into monsters to make sure the survivors don’t think about what has happened and keep the station intact long enough to turn it into their weapon.

Result: One of the best Doctor Who books. A superbly plotted thriller, which is loaded with twist after twist that will leave you reeling at its conclusion. There are loads of exciting set pieces, a cast of guest characters that come alive like you wouldn’t believe, a host of fantastic, imaginative ideas, suspense and drama. All this and there is still room to take three fascinating regulars, put them through hell, get up close and personal, and see them emerge stronger and more interesting than they were. The amount of detail that has gone into writing this is rare for a Doctor Who book, the three time zones come alive with astonishing clarity and the prose itself is full of great observations, strong descriptions and a terrifying pace. It really is one of the best Doctor Who books you are likely to read and the one I would personally recommend to non fans who love science fiction. A blistering read: 10/10
Posted by Doc Oho at 04:29