Plot: Another case for the fearlessly intelligent Sherlock Holmes and his associate Dr Watson. Underneath the gleam and shine of London a plan is being hatched in its underbelly, a plan to expand the British Empire like never before. Travelling to the heat of India and the exoticism of another world, Holmes and Watson find their sanity stretched to the limit…

Master Manipulator: Like most of the book the Doctor is magnificently described. However I would have thought that the meeting of these two giants from literature would have seen them joining forces and working as a team. Instead the Doctor seems to delight in hanging on at the sidelines and winding Holmes up as much as possible. In places he is extremely patronising about the man and smug about his superior knowledge.


The Doctor’s ensemble looks as though it was selected in the dark from the Eastcheap markets. He is in search of universal peace, an end to strife, and unlimited custard for all. His style of debate is to adopt a superior attitude and scathing criticism. He is described as gazing owlishly over the curved handle of his umbrella which is just about the finest description I can think of for this Doctor. Unlike Holmes, the Doctor seemed to prompt from behind rather than lead from the front. He is extremely scathing of the human race, criticising their need to sleep and their pride at their innovations. He is described as being short and trouble. The Doctor has always had a soft spot for the 19th Century – there is a sense of infinite possibility, anything could evolve from the morass of science and superstition. It showcases the humanity at its best and its worst. Getting lost is what the Doctor is best at, but he always manages to turn up again like a bad penny. Sometimes the Doctor hankers for the days when all his companions did was scream and sprain their ankles. There is no safe hand to hold than the Doctor’s. 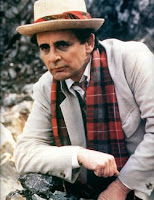 Boozy Babe: Bernice is written out into the second half of the book but the second she joins the story she reminds you of how brilliant she is. Finally some more extracts from her diary and they are every bit as incisive and entertaining as I imagined. She wonders if the Earth is her home anymore. She thinks that poverty and powerlessness are the real evils of the universe. Watson fancies the pants off her and not in a chasing skirt sort of way; he is shocked by her forwardness and her bravery. He finds her bluntness, vivacity and cynicism very refreshing. She thinks the buggerance factor of the universe tends towards maximum.


Oh Wicked: Easily the worst portrayal of Ace to date in the books. It’s as though the editor completely forgot to remind Andy Lane that we are dealing with New New Ace now rather than the bully New Ace of old. To be fair he does at least have the courage to write her out for practically the entire book, a popular quirk of the recent novels. She is a ridiculous joke here, violent to the point of psychosis and full of anger. Her quality dialogue reads like, “These days, what I don’t like, I stop. Violently” and “Well they’re not going to do crosswords on the train, are they dick-brain?” and “Listen Spunk brain!”…you get the idea. She always thinks people are enemies until they prove otherwise. She doesn’t feel comfortable in clothes that aren’t bullet proof and laser resistant. After her excellent showing in Theatre of War it has become clear that there will never be a consistent character for this woman and after this she needs to step out of the TARDIS as soon as possible.

Foreboding: Holmes spots a copy of Shakespeare’s lost play, Love Labour’s Wonne!
Twists: The first chapter alone is simply gorgeous; anyone who has read Doyle would instantly recognise the beautifully researched voice of Watson’s charming narration. Holmes and Watson, on the Orient Express are asked by the Pope to investigate the theft of holy text from the Library of St John the Beheaded. Holmes tells the Pope (who offers any price for him to investigate), “My fees are on a fixed scale.” Now that’s class. Mrs Hudson mothers Holmes and he, the great observer, never notices. The London sections are atmospheric and evocative and infused with rich detail. Kate Pendersly bursts into flames to the astonishment of Watson. The bulldog fight is a scene of human degradation and the punishment the gangs dish out on those they think have been bribed (slicing their hands off) is enough to make you lose your breakfast. The scenes at the Diogenes Club with Mycroft Holmes are intriguing, somebody even more skilled in the art of detection than Sherlock? Baron Maupertuis is revealed to have raised an army to invade an alien world in the name of colonial imperialism. The British Empire is based on oppression and slavery and they will be spreading death and destruction across the cosmos. Watson shoots a cobra in half whilst he is in the bath. O’Connor is revealed to be…Moriarty! The fiend! You’ve gotta love this Master like reveal. The Doctor, Bernice, Holmes, Watson and Moriarty taking on four rakashassha is brilliantly exciting. Holmes resorts to cocaine to alleviate borderm. The Old Ones are beings who jumped ship from the old universe as it took its dying breath to our universe as it was being conceived. Sherringford Holmes is revealed to be the master plotter behind it all! The plan isn’t to invade Ry’leh but Earth; Azazoth is posing as one of the Old Ones and needed Sherringford to bring the army through as a distraction to her jailer so she could escape. Shockingly, Holmes beats his brother to death to save Watson from his clutches. The Doctor changes the destination of the portal and Azazoth is deposited in the great San Francisco earthquake of 1906.


Funny Bits: Watching the 7th Doctor wind up the 3rd with the answer to his crossword clue is hilarious.
“Knowing how much I get on Watson’s nerves, I occasionally wonder if my last sight on Earth will be of him standing at the foot of my bed with a syringe of cyanide in his hand!”
“Hide around the corner you damn fool!” – Bernice, initially going for the subtle approach figures Watson needs clearer directions!

Embarrassing Bits: Ace, which I have already covered. Get rid of her.
Andy Lane jumps through hoops to have Holmes and Watson exist in the Doctor Who universe and still have them be genuine literary creations. Basically his theory is that Holmes and Watson aren’t called Holmes and Watson, they are just aliases for Conan Doyle who has taken Watson’s (or whatever he’s called) experiences and essentially ghost written them for publication. I don’t buy it for a second…
I could have done without the scenes that flaunt paedophilia with such brazenness, quite out of place in a Holmes story and not necessary in a Doctor Who one either.
Litefoot, Fenn-Cooper, Challenger, Lestrade, Aberline, the 3rd and 1st Doctor…this book has its share of fanwank.
It gives me no pleasure to admit this but the whole of chapter 14 is boring beyond belief, astonishing considering how riveting the earlier sections are.


Result: The first 100 pages are out-and-out the best thing that has been produced by the New Adventures. As a Holmes pastiche it feels startlingly genuine and the prose is delightfully sensual and packed with interesting historical detail. I could have stayed in this depiction of London for an entire book series. Things become choppier in the next 100 pages but it maintains the interest, the India sections are again beautifully visual and Bernice’s sections help to keep things lively. The whole thing falls to pieces in the last 100 pages which dumps the detective story and opts for a more standard Doctor Who run-around on an alien planet. I have never known a book to take such a nose dive. However the prose is of a remarkable quality throughout, Andy Lane tops even Paul Cornell’s ability to depict a scene vividly and his characterisation of Holmes, Watson and Bernice remains very strong. Annoyingly the book jumps through revisionist hoops to justify Holmes and Watson appearing in the flesh rather than just letting them do their stuff, I could have accepted their inclusion as just a rather wonderful experiment. This is a strong read, that stunning first third is exceptional but my advice would be to get to the point where the team are about to step onto an alien world and shut the book. The ending you make up will be much better. Flawed, but written with real flair: 8/10
Posted by Doc Oho at 04:56