Plot: Time travelling buses, train station sized spaceships, Children of Destiny, robot sheep, fake Brigadiers, fake Masters, holes the size of houses in cinemas, the Galactic Federation, a dilledante, a dizzy blond, an old hag and a queen…that just about sums it up!


Good Grief: Paul Magrs has the special ability of being able to take the piss out of things without insulting the creators and actors and his brilliantly observed but knowingly exaggerated third Doctor is a beautiful example of this.
The Doctor’s people punished him and at this point in his life he’s living in disguise on Earth, albeit in rather comfortable and frequently exciting disgrace. When he smiled his face look weathered just as a man of his lifetimes of experience ought to. He knocks around with his flibbertigibbets to make himself look clever! His manners are suave and persuasive. He gets very upset when Iris accuses him of loving getting involved with the Brigadier and saving the planet. He is elegant and dashing and happiest when there was something intricate and practical to be getting on with. The Doctor and Brigadier get along with a surprising degree of heartiness and old school chumminess. They trust each other and both claim they are more resourceful than the other. They were constantly pleased when the other showed up on the scene. The Doctor is an iconoclast, a headstrong adventurer with a raffish line in flamboyant eveningwear! He calls everyone madam and it makes him sound obsequious. He thinks being stuck on Earth is ghastly, like a hamster on a wheel going round and round but not getting anywhere. He is one of the great rocks of the universe. When he draws himself to his full height Iris is thrilled by his gravitas. He likes visiting Sally at the corner shop because she reminds him of his mother (???). It is only when he is transfixed by the swirling patterns of the vortex through the windows of the vortex that he realises how much he misses being free. After he has dealt with the Omega affair, the various rather complicated codes he needed to pilot the ship slipped back into his head with exactly the same sensation as a dream coming back to you, the morning after you had dreamt it.


Dizzy Agent: Jo has had basic secret agent training but never got around to learning the more vigorous stuff. Jo often feels young and inexperienced in the situations she found herself in. She screams and complains and misses vitals clues. She is the most mind numbingly loyal assistant a sexist rake could desire.

Chap with the Wings: He is either a stoic and practical man, rarely seen out of his combats whose absolute faith in extraterrestrial phenomena makes him something of a loose canon in military circles or a barking old fool, utterly dependant on an extraterrestrial fop. You decide. Whatever, he runs his operation with unflinching common sense.


[Now there are some people that get upset about this sort of thing but Paul Magrs has a knack of pointing out some of the more hilarious faults of Doctor Who but in an incredibly fun and nostalgic way. Some call it postmodernism. Some call it brilliant. Some call it shite. Personally I love it, while it remains this entertaining…here is the best of Verdigris…
· Tom had endured a run of historical adventures, all of which had bored him


· Jo’s friend Tara (King, from The Avengers) is also a secret agent, an assistant to another rather eccentric freelance gentleman adventurer.


· The Doctor mutters something about being en route to Devil’s End but Iris thinks she has misheard!


· Mike Yates is turned into a two dimensional piece of cardboard! I laughed myself until I was sick about this one! Jo folds him up and puts him in her handbag.


· Jo is captured in telesnaps on the cameras, most of the UNIT visual material was junked in the 70’s.


· “UNIT itself was an illusion. All of them actors. Think about every alien artefact or creature you have ever seen. Weren’t they always surrounded by a crackling nimbus of blue light? Didn’t they sometimes look a little…unconvincing?”


· Magrs comments on his own book The Blue Angel: “Oh I never get to the end of books. Its much more fun making it up yourself!”


· Everybody in the 1970’s looks like someone out of Get Carter and Are You Being Served?


- The Children of Destiny are a poor mans Tomorrow People. Homo superior: “Isn’t that a bit fascistic?” The Galactic Federation: “Some kind of intergalactic EU.”


· The tabloid covers for the Doctor’s adventures read…The Guardian: “WHAT ROBOT ARMY IN THE SEWERS? WE DIDN’T PUT IT THERE?” The Daily Mail: THESE DAFFODILS CAN KILL! The Sun: MY YETI HELL!


· There is a fake Dalek rolled out: “If you look right down, you’ll see there are little pedals at the bottom, and a seat for the actor inside.”

· “As for those so called Sea Devils – I’ve seen more frightening kippers!”


· The Doctor, faker of alien invasions, has a Silurian hand under his bed!


· There is a great comment on the budget of your regular episode of The Tomorrow People: High Councillor Borges is a creature formed of fleshy coloured substance, a thick rotund body with eyes on hair like stalks – the most unlifelike creature Tom had ever seen.


· I love the fact that there is a lack of story placing on the back cover, obviously to get all those canonical freaks in a tizzy!


· Iris: “I adore the Net. Have you tried putting in your name?”The Doctor: “Certainly not!”Iris: “I did and the things they say about me!”


· K.9: an obnoxious piece of tat. The Doctor: What the Dickens would I want with a robot dog?”


· Jo is astonished to find that the villain of the piece ISN’T The Master because it is rare that a threat to humanity doesn’t involve the Master!


· Poor Old Ted…the gamekeeper or possibly a tramp, its not really important. He’s only in one scene and there to be killed off.


· The funniest moment in the entire book comes when the aliens invading Earth as fictional characters and have invented the words ‘post-modern’, ‘self referentiality’ and ‘metratextuality’ to cover up the fact that their plan was a bit ****e. The result of these excuses infects the Earth with a epistemological quandary that will leave humans perplexed for at least a century.] 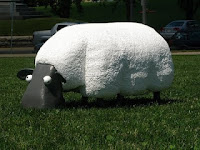 Foreboding: Verdigris believes if he makes Omega in the anti matter world aware of the Doctor’s presence on Earth it may help get his exile lifted. The Master is off to do some deals on Skaro.

Twists: Tom had stumbled into Iris’ TARDIS after a particularly heavy night out and still believes he was kidnapped. A comment on the complicated nature of the eighth Doctor adventures comes early on, the 70’s is described as: timelines intact, causality unimpeached, a gentler time and a more innocent time. A train carriage materialises in a field full of comatose characters from Pride and Prejudice! The Doctor gets a kicking fro Miss Haversham. Jo claws at the Brig’s face to reveal…the Master! And he snogs her! Tom meets his mother before he was born; she is one of the Children of Destiny and told him when he was young that he would have a great destiny. The escape pod punches a hole the size of a house in the side of the cinema. The Master is revealed as…Verdigris! Iris’ handbag is a member of the Galactic Federation! Iris was a member of the Sisterhood of Karn (Sacred Flame! Sacred Fire!) and mad staring eyes Ohica (Death! Death! Death!) working with Morbius transported her and her previous selves to the Death Zone on Gallifrey to face such horrors as Voord, Zarbi and Mechanoids. The Galactic Federation is revealed as a sham…it is in fact a hollowed out mountain…in Wales! Verdigris fooled the Galactic Federation, he convinced the Meercocks to invade Earth, he tried to make UNIT look like bungling fools…all on Iris’ command! When she was drunk, she summoned him up and commanded him to end the Doctor’s exile, no matter what it takes. Discrediting UNIT and allowing an invasion to take place from aliens with the appropriate technology would enable the Doctor to escape.
Funny Bits: Iris is bundled around like a sack of old potatoes!
Sontarans parachuting over Wales?
The Doctor calls Iris an oafish and clodhopping harridan…hehehe.
Romana: all fur coat and no knickers!
The Master was at the UNIT Christmas party!
“He’s dying to get his hands on my bust…bus. Sorry.”

Result: Considering it is such a short book and the prose is so light I was astonished at the amount of notes I took, a sure sign that this book has some fascinating content. Verdigris is utterly surreal and brimming with imagination, highlighting the strengths and the weaknesses of the Pertwee era. The humour is pitched a perfect level and every page throws a fresh gag in your face, most of them striking exactly the right note. Iris and the third Doctor are just made for each other and Jo and Tom go on a hell of a journey too. Everything is tied up beautifully at the end and the coda leaves the reader with real sense of joy. Frankly I cannot imagine anyone wouldn’t like this book, unless they find it hard to laugh at themselves and this amazing show that we have all come to love: 9/10
Posted by Doc Oho at 00:19