Plot: The Doctor and Compassion are trapped on Parallel 59, a militaristic base heading up a secret project with dramatic ramifications for Skale. Fitz, on the other hand, has landed in paradise, a utopia of easy work, an abundance of shaggable women and no hassles of any kind…

Top Doc: I’ve heard people slag off the Doctor’s characterisation in this book but reading these books in order it is probably he most vivid and unique he has been since Unnatural History. Compassion thinks of him as a likable idiot and he is certainly in a silly mood at the start of this tale (“I’ve discovered we’re spies! Isn’t that exciting! I had no idea!”), unconcerned about the fact that he and Compassion are stark bollock naked (phwoar!). Things become much darker later on, when he tries to get Compassion to open out to him, telling her he has been worried about her for some time. Compassion describes him as a function of the universe, and he certainly proves her right when he hands over his one advantage, his gun, to get Makkersvil to trust him and thus save lives. There are two fabulous moments where he proves his unpredictability, he tickle tortures Jessen for the information he requires and he scares the crap out Jedkah by leaping back from the dead just as he was about to dissect him. And just to make life interesting, the Doctor has to destroy a world to save the day. Nice.


Scruffy Git: Oh. My. God. If there was ever a case of taping up Fitz’s dick Parallel 59 would be the resting case! First he has it off with a married woman, then he cheats on her with a sweet bit of skirt he meets on the way home from work and then he cheats on her with some trussed up tart from the local bar! Anya, Fillipa and Denna, failed romances number (s) five, six and seven! It is beautiful watching Fitz sink deeper and deeper into trouble, as his women all converge as Mechta starts coming apart. Saying that there is some lovely development of Fitz here, he constantly feels like he is an Englishman abroad travelling with the Doctor and finds he misses his effect on people when trapped in Mechta. There are little details wrong in his personality and he fears the TARDIS has left some gaps, for example he cannot remember his dreams anymore whereas as the old Fitz (the real one) used to love pulling them apart in the mornings. It is sweet when he admits that he isn’t a brave man but that he can do brave things when the Doctor is around. He feels he has the ability to shag up (as in ruin) every place he visits. He thinks he is like dough, being re-modelled time and again (by the Red Army, the Remote, Faction Paradox, the TARDIS…). Who said there was no follow up on Interference's developments?

Stroppy Redhead: Described as touching the world at a distance, she feels she barely knows who she is anymore. She is terrified of the implications when she destroys the analysis machine in Parallel 59 and runs away from the Doctor when he tries to confront her about her changes. He admits he wants Compassion to start caring and when the adventure is over, after she has been immersed in the mind torture environment of the bastions, she clings onto the Doctor for support. She feels being close to the Doctor, doing the right thing, is liberating her. She hasn’t lost her sadistic streak though, she gets down and dirty with Tod to get him to help her rescue the Doctor and then barely shows an interest in his welfare for the rest of the book.

Foreboding: Compassion feels as though the Doctor is trying to turn her into an ‘old girl’ just like the TARDIS. D’you think she knows…?


Twists: God I wish I were Compassion, she gets to see the eighth Doctor starkers! The second Fitz realised he has landed in a utopian paradise I cringed…it had to all go horribly wrong. When Yve is caught in the explosion she is described as ‘glistening, as though she had been dipped in tar’. The Yve-Makkersvil-Jessen triangle is fascinating (Yve keeps Makkersvil a low level worker just so she can be close to him, Jessen tries to get Makkersvil killed during interrogation because she loves him…). Anya’s pathetic pleading with Fitz is heartbreaking and he comes across as a total bastard for pushing her away. Brilliantly, the Doctor pulls a ‘death’ to escape custody, adding to the already embarrassing statistics of Dam’s suspects. When you discover what the bastions are the book takes on a whole new meaning, revealing just how paranoid and desperate Parallel 59 is, threatening other Parallels who might beat them at the space race by dropping devastating bombs from space. The race against time to launch the mineship is page-turning stuff. “We’ve spent the last 30 years committing suicide,” admits Makkersvil when the voice Haltiel reveals itself, hiding like a predator behind the screen of their bastion network, waiting for one to break and pounce through and kill them. 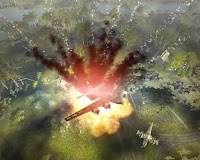 Funny bits: The Doctor claims he and Compassion are time travelling naturalists. Apparently, ‘only’ planets (like Skale) grow up spoilt. Compassion admits that her name is a KODE name (geddit?). “This is the most ridiculous escape you’ve ever made!” cries Compassion at the Doctor, obviously never having seen The Chase. Embarrassing bits: It’s the second cover to feature McGann and again it is absolutely hideous. Who thought those dribbles of blood were a good idea? And why didn't they feature on the cover of Beltempest where they would be far more apropriate?
Result: A massively undervalued book. For once an EDA bothers to have an equal amount of solid characterisation AND plot and both prove to be quite surprising in places (Anya’s heartbreaking attempts to get Fitz’s attention, the sudden appearance of the ship from Haltiel). The book is a little flabby in the middle, having set up an intriguing mystery it runs on the spot for a little while offering hints and scraps at what is to come. I never felt this was the work of two separate writers and the prose is very readable, made even simpler by those friendly short chapters (48 in a 282 page book!). The regulars are handled very well and the last 80 pages rocket by effortlessly, full of excitement and great twists. Even the ending is perfect, tragic (the loss of life) and yet strangely uplifting (the loss of the militaristic regime and the suggestions of humility, rebuilding and reunion). I devoured this in a day, aware of a few problems but pretty impressed by the end result: 7/10