The Space Age by Steve Lyons 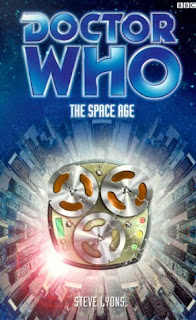 Plot: There’s a war taking place in a futuristic city, a bizarre occurrence when it seems to be between the Mods and Rockers gangs from the 1960’s. The Doctor and Fitz find them caught up in the conflict and Compassion stands about for a bit…
Top Doc: Described as a wise old man and a mischievous child. He fears the Makers because Time is an irrelevancy to them. He is clearly loving the chance to play the hero here, jumping in and getting involved. He’s still dealing with losing the TARDIS by immersing himself in other people’s issues. I cannot believe he tries out the same riddles he tried to fox BOSS with in The Green Death and Davros in Destiny of the Daleks! He’s an extremely cheerful chap in this book and is prone to some horrid soap boxing speeches. It’s not the best interpretation of his character because he is pretty redundant to the book overall but the excitement and gentleness he radiates is McGann to a tee.
Scruffy Git: A bit useless all told. He has fallen into the Sam Jones school of companion roles…getting locked up and escape ad nauseam! You would think that in a book that concentrates on the atmosphere of the sixties that Fitz would be beautifully characterised throughout but aside from some nice pleasant interaction with the Mods/Rockers (with some excellent cod-sixties dialogue) he is pretty unmemorable. He still feels uneasy with Compassion and tries to think of her as an object to make travelling around in her feel less awkward. Still there’s no romance for the guy, which makes a nice change! 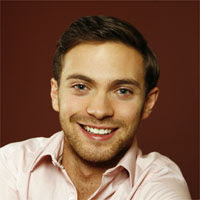 Stroppy Redhead: She’s showing off more abilities these days, such as her senses probing into dimensions the rest of us cannot see and being able to link with people an ease their pain. In one beautiful sequence we see her show Fitz a number of possible fates for one character, sharing the Doctor’s weird ability to predict the future of peoples lives. This would all be worthy additions to Compassion’s character were she not stolen from the book for 60% of its length. As if to highlight this error, Mr Lyons has her literally stand around and do nothing.
Twists: Fitz gets a knife in the chest! That was the only real moment that shocked me…the following category could possibly be included under the twist list too but they are twists so mind numbingly awful I could not include them here…
Embarrassing moments: The Mods and the Rockers transplanted into the future…what a load of old tosh. Sandra and Alec just happened to stumble across the Maker and he just happened to create the futuristic city for them? It’s good we have this co-incidence or we wouldn’t have this book (more’s the pity!). Rick just happens to be Sandra’s son and the new boss of the Mods! Gah you couldn’t make this **** up! The Mods and the Rockers have forgotten what they are fighting about…why bother then? They give up the fight just like that to take on the Makers! The Makers give these violent idiots a choice to travel 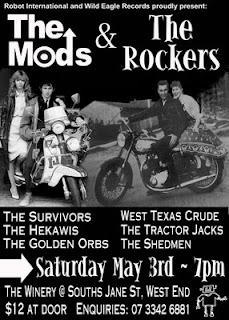 into the future and make a mess of that too! The most brilliant bit of nonsense in the whole book is when you realise the original Maker has set the planet to self destruct (I know it’s a bit more complicated than that but that is what it basically boils down too…)…talk about trying to shoe horn some desperate tension into the book.
Result: Oh. My. God. This rubbed me up the wrong from the first scene and coming from the usually reliable pen of Steve Lyons it is a double shock. The premise is ridiculous and the book is full of stupid, illogical twists, the characterisation is poor (The Sandra/Alec thing could really have been exploited but it felt really unnatural) and the regulars barely register. There were a few moments where I perked up, mostly when Compassion turned up, even muted as she is here she pisses over all the other characters. This should have thrown in the slag heap the second it hit Steve Lyons desk, the prose is basic, storyline prosaic and considering its placing (in a pretty decent run of books) it sticks out like a sore thumb. Something could have been made of the Makers but not attached to this plot. One of the weakest EDAs I have read yet: 1/10
Posted by Doc Oho at 07:40