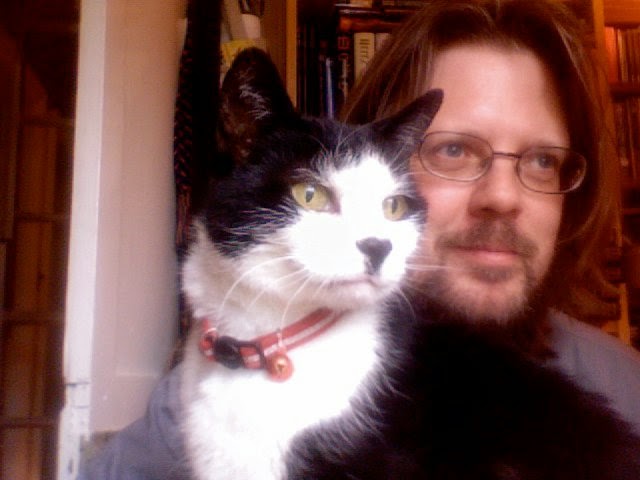 Can you tell us something about your formative years, what made you want to study and write fiction? What were your greatest influences when it came to writing your own novels? Is there a novel out there that you wish you had your name on?

When I was a kid I was surrounded by people who loved to read and who thought that being a writer would be the most fantastic job in the world. I was very encouraged both at home and school to read and write precisely what I wanted. It was a tough school I went to, and they preferred to teach boys things like football and metal work… but I got through okay. I had my first typewriter when I was about seven and wrote my first full-length stories not long after.
I loved Doctor Who books, and Roald Dahl – and then there were books I loved and it was only in recent years that I was reminded of their titles and authors – books like Humphrey Carpenter’s ‘The Captain Hook Affair’ about a silver pencil that brings fictional characters to life, and Mary Rodgers’ ‘A Billion for Boris’ – about a TV set that tells the future.

The Scarlet Empress certainly made some waves when it was published, a full bloodied fantasy novel that abandons structure for imagination and sensuality. Tell us something about the creation of Iris Wildthyme. What did you think about the response to the character? How did you go about tackling the (much maligned at the time) characters of the eighth Doctor and Sam? Do you have any favourite moments in this novel, and do you consider it the best of your Doctor Who books?

I just set about writing it as a proper novel. I loved the idea of original Doctor Who novels, but I found so many of the existing ones to be very gloomy and over-complicated affairs. There wasn’t much fun and they had the wrong kind of self-consciousness about them. I wanted to write something funny and adventurous and something that included hints of the Arabian Nights and Lewis Carroll – and that was also a quest story – a picaresque romp. It uses the ‘story-within-story’ structure in places that I’ve messed about with elsewhere. I think it caused a fuss – not just because of Iris arriving and cocking a snook at shibboleths – but because lots of Doctor Who fans like things to be ‘just as they were / are on the telly.’

The first thing I noticed about The Blue Angel (besides that striking cover) was its reduced word count, was that deliberate? This novel was part of a much larger arc story than your first Doctor Who novel, was it hard to work around that or did you find it added more impact to the novel? It’s your only collaborative Doctor Who book – how did you find sharing the writing responsibilities? Can you tell us how the provocative ending came about – tearing the Doctor from the conclusion and denying the reader a definitive climax? And which Iris do you prefer writing for?


The ending is there! It’s all there! The twenty questions at the end are merely a gesture towards what happens to the characters after the story has ended. What were all their sequels – all the bits we wouldn’t get to see? People got het up about breaking the formula, again, with this book. It’s a story told in different, plaited strands – that may connect and cohere, or they may not. It’s a book about levels of fictionality – again that obsession of mine with storytelling, I guess. Doctor Who – with its time travel, parallel universes and multiple lives – seems the perfect place to experiment with these themes. I can see it would be hard to read my stuff and try to imagine it all being ‘literally true’ inside one consistent universe. But I’m not very interested in things being literally true inside one consistent universe, really.

With Verdigris did you deliberately set out to bask in the nostalgic glow of the Pertwee era whilst giving it an affectionate poking?
Did you find it more of a challenge to write for the Past Doctor range, having to slot the events into established continuity? What is your opinion of the third Doctor’s era, easily one of the most divisive in the shows history?

I love that era – as I hope both Verdigris and Find and Replace both demonstrate. I do wish we’d had more stories with the third Doctor and Jo visiting moments in history, though. Maybe a bit more variety would have given those seasons a better reputation? There are a lot of invasions. Actually, I found it very comfortingly easy to slip into that continuity and that world. It’s like parachuting back into a moment in time – or landing a double decker bus on that moment. There might by a few shock waves – but it’s nice to park up and have a visit. I wish the PDAs had kept going, and that I’d had a chance to do some more, really. There was a lovely freedom to that books series.

Mad Dogs and Englishmen is a truly hilarious experience. Coming after the torturous and weighty Adventuress of Henrietta Street it was perhaps the perfect antidote. What did you think of the cover? Considering how well you captured their voices how did you find companions Fitz and Anji to write for? As a writer that uses continuity so effectively, how did you find writing a novel for the amnesiac eighth Doctor? Tell us a little bit about the conception of a novel that pulls in elements as far out as Lord of the Rings, George Lucas, Noel Coward and talking poodles! And more importantly…why wasn’t Flossie kept on?

I loved writing that book. It was during quite a difficult time – during a year when both a good friend and a close relative died.
My partner moved away to work in a different city. I felt overworked and rather unhappy in my day job at that point. So I poured myself into a luscious, ludicrous fantasy. It’s been an important book ever since – in the sense that elements and characters from it – the Smudgelings and the Blithe Pinking Shears and the poodles themselves – have recurred in some of the stories I have written since.
I loved writing for Fitz. Anji was a little harder to get a grasp on, maybe. It’s incredibly hard, fitting a novel into an ongoing series like this, with other books being written around you, simultaneously. You really have to trust your editor – which I could do, and it all turned out well, I think.
Oh, the cover! I remember the day the print-off turned up in the post. It was one of those moments when you realize that people you’ve never even met before really understand what you’re writing about. They just got it. I love the thought that the day-glo pink, screamingly camp cover gave some uptight people the willies.

You took a long break from Doctor Who fiction before returning to the New Series Adventures with the brilliantly titles Sick Building. Did you have to adapt your style to appeal to a younger audience? Did the reduced word count result in a tighter novel? What do you think of the new series in general and did this book come under more scrutiny than previous ones now the show is such a commercial hit?

It came under less scrutiny, really, in terms of its reader reception. By then, the books were no longer the driving force of the Doctor Who narrative. They were ‘missing adventures’ that had only just recently happened – and they could contain no plot beats whatsoever, because all that is on the telly, of course. So they are, in a sense, elaborations and reiterations of themes and tropes already familiar from the ongoing show.
And yes, there’s a fair amount of pressure to ‘get it right’ – and I was told quite explicitly not to get too outrageous or make it too much ‘like me.’ And that’s fine – it has to fit within a certain house style.

Which is your favourite Doctor Who novel and why? Do you have any particular favourites within the various ranges that you haven’t written?

So hard to answer! I really don’t know. I love Barry Letts’ The Daemons more than anything. And the Malcolm Hulke novelisations are marvelous. As for the originals by my peers – I love The Dying Days and Vampire Science. I loved Nightshade and Witchmark. Wolfsbane. Time and Relative. Vanishing Point. Salvation. Lots of them!

Can you tell us something about the adventures of Brenda and Effie? Whitby has cropped up a few times in several of your works; do you have a particular affinity with the town? Do you consider these novels short story anthologies or novels? How long do you think this increasingly popular series will last?

Of course they’re novels! Like many other novels – especially Gothic novels – they depart from the kind of linear novel structure you’re perhaps more used to.
They use episodic format, or framed and nested stories within stories, or elongated flashbacks… or all manner of story-telling devices that I’m interested in.
Whitby was a town we visited when I was a kid – a few times. Its curious atmosphere seemingly seeped into my subconscious and stayed there… until I revisited in the late nineties – and started writing spooky stories that were set there.

Was Diary of a Doctor Who Addict semi-autobiographic? Can you sum up the appeal of this novel and what encouraged you to write it?

Yes, it has elements in it that come quite close to my experience. I think its appeal is to anyone who ever grew up being a fan of something. Anything, not just The Show. It’s about the kind of obsessive fandom that makes you want to make things, draw things, write your own stories. And it’s about feeling a little bit out of place or out of synch because of those feelings…


Of your original novel novels do you have any particular favourites or ones, which were more popular than others? Do you ever think that you would like to go back and give a book another go or are you always hungry to write something new?

I think as I writer I’m always pushing ahead – with new ‘shapes’ of novels and story ideas and characters. But I love reviving characters, reinventing them – or introducing them to each other across books and series. I like the connections between books and the sense of an ongoing, sprawling, endlessly contradictory story.

What’s in the pipeline at the moment?

I’m working on two novels just now. Both will come out in 2011. The first is ‘Enter Wildthyme’, which Snowbooks are publishing. It’s the first full-length Iris Wildthyme and Panda novel. It begins in Darlington with a curious old bookshop and a secret base under the indoor market – and then it sets off into space and time. The other book is called, ‘666 Charing Cross Road.’ It’s a spooky mystery to be published by Headline. Just as funny and mysterious as Brenda and Effie… but set mostly in New York, with brand new characters that I hope people are going to love just as much.

Paul, thank you very much for your time.
Cheers!
Posted by Doc Oho at 18:48