Plot: The Doctor, Ben and Polly land on a planetoid containing the Empire’s most wanted terrorists. An elite unit of soldiers are on a training mission that is about to turn deadly. The ten corpses are vanishing and people start dying and soon the Doctor realise they are in the middle of a terrifying trap that spells trouble for the Earth’s Empire…

Hmmm: This is a very mature take on the first Doctor. It is tempting for many authors to highlight Billy Hartnell’s fluffs and goofs and giggles and hmm’s but Stephen Cole does not take this easy path. His first Doctor is authorative and burningly intelligent, observing all and cleverly thinking through their problems where others would smash through guns blazing. Considering the ten strong gang of bullies and thugs he has to endure this adventure with he manages to stand up to them and hold his ground with remarkable force. He’s a hell of a guy!

He is a black and white character, not just in his appearance but in the way he saw things – he suffers no fools and takes no prisoners. He’s like a granddad who has lost his marbles! He fiddles with the console the same way Ben’s dad did with the family car, fiddling with bits to see if it works! He struggles for worlds sometimes – like an actor drying up on stage. Nobody gives the Doctor answers; he seeks them out just as anyone can. For one moment in the book that Doctor doesn’t look like a brilliant academic but a bewildered, frightened old man. The Doctor’s mind is fresh but his body is old. He is holding back some sort of change. Soon he shall feel a new person.

Able Seaman: I love Ben. I feel he and Polly were given a bum deal on the telly and even though technically this adventure couldn’t have taken place I don’t give squit because it gives us more chances to enjoy this pair. Its odd that they spend most of their time with the 2nd Doctor but the only book they have successfully appeared with him is The Roundheads whereas matched with the 1st Doctor here they feel like they are right at home. There is something very innocent about this pair but naturally so and they are both charismatic and sexy as hell.

In the navy Ben had seen so much, been so many places and learnt how to handle himself. He wishes he could see his mum again, the daft cow. When he sees Polly again after a horrific ordeal he decides she is as beautiful and perfect as when he first met her, despite the fact she is filthy and tired. He continually proves his strength (physically and of character), taking on Kill Droid, thrusting himself up statues into the unknown and mucking in. Frankly he is exactly the sort you would want watching your back. He isn’t the brightest in class but he has plenty of guts.

Lovely Lashes: Polly likes to think she’s independent and can look after herself but Ben knows better. All Polly knows is parties, poncy nightclubs and finishing school! She had wanted to give something back to society and started working at a charity shop. But she had hated the squalor of the grey little store and quit after a week. Polly had always wanted to reach out and touch the stars. It’s a beautifully

ironic moment when Polly, who has pretty much been treated like a bimbo and useless, discovers the navigational crystals that saves all their lives. Go Pol!

Foreshadowing: There are some sneaky references to the Doctor’s upcoming regeneration without saying anything specific.

Twists: Straight away this is a world that comes to life vividly, the shard VR experiences, the E-Zine…they are imaginative ways to get the reader absorbed into this nasty, gritty world. Shade being shot before the entire military for criticising the equipment is way-cool. The Schirr complex is designed to break free of the asteroid for destinations unknown. The Schirr have infested the training area and subverted its functions to accommodate their own. Lindey being dragged off into the darkness lightning quick is a great shock. Ben takes on a Kill Droid in a really tense action sequence. Shel’s arm is blown away to reveal he is a cyborg. Did he set all this up or was he investigating the person who did? They discover the asteroid is heading for the Morphien Quadrant. The moment Ben climbs up one of the statues is well scary – one of statues twists around to look at him – blood from a human corpse bleeding from its hand. Is Frog turning into a Schirr? Pages 150-152, the flashback to the Schirr attack on Toronto is griping. You’ve gotta squirm at the scene where they discover where the missing troopers bodies have gone…as fuel for the rituals! Frog attempting to slice away her skin is really disgusting. So is the scene where Joiks is lifted into the air and both of his arms are torn off! We the statues that are roaming about killing everybody are made from the fleas that are irritating everybodies skin. The Neural Net section is a minor stroke of genius, again it is an unusual and fascinating device to keep peoples attention and make everything a bit different. And don’t attempt to skip it, those of you who have grown up because it contains some vital information. Haunt is revealed as the traitor who tricked them all into coming – I never saw that coming! The Schirr saved her life on Toronto and grew a malignant cyst so she would do their bidding. She justifies this by killing every 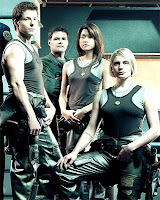 Schirr she meets with a passion and figuring that the ‘Spooks’ would be less of a threat if they did attack Earth and have bodies so they could genuinely fight back. The Schirr are working with a dissident group of Morphiens. The ten strong planned to magically turn Haunt’s troops into Schirr flesh and absorb them for strength. The Schirr want to claim victory over the humans and the Morphiens want to attack Earth so they can lay claim to bodies. We discover Shel is still alive, inside the neural net and he disrupts the ceremony and strips the dissident group of their protection and the Morphiens claim their criminal brethren. Roba sacrifices himself so the ceremony will not work, there will not be enough humans for each of the Schirr.

Result: New Battlestar Galactica meets Alien meets Agatha Christie… and it proves to be a real intoxicating brew! Ten Little Aliens is one of the best PDAs I have read in a while, featuring a genuinely interesting plot, some lovely gory moments, a healthy number of plot twists and some terrific atmosphere. Cole manages to create a convincing dirty world of worn down troops, one that exists outside of this particular story. The characters evolve skilfully, it starts out a little shallow but as things get more tense we learn more about these people and by the climax they have all blossomed beautifully. Even the cover is memorable. It is probably the best thing Cole has written for the range. Superb: 9/10
Posted by Doc Oho at 07:05