No Future by Paul Cornell

Plot: Punk rock is alive in the seventies and the Black Star organisation is causing terrorist attacks on London landmarks. The Doctor, Benny and Ace’s relationships have reached breaking point and a friendly offer tempts Ace into the hands of an enemy that has plagued the Doctor for months…


(The one thing this book does [occasionally] gets right is the regulars. There are shining moments scattered in the text that remind you that Paul Cornell has not lost his mind completely)


Master Manipulator: The Doctor’s time on Earth is known as the Bug Era. The Brigadier (apparently) does not recognise him this time but it is a trick to fall the members of UNIT who have defected to the enemy. Something was showing the Doctor all kinds of alternatives. He’d tried to right the world enough times, to be Time’s Champion. He felt his handwriting stretching across the universe. Every time he tried to stop there was another monster to fight. It is a very sweet moment when the Doctor realises that someone still has faith in him – Benton. The Doctor has to avoid kissing Ace on the head when she is sleeping peacefully in bed in the TARDIS. When the Doctor first met Bernice he recognised her voice as a part of the band Plasticene and knew she would travel back in time. The Doctor symbolises the best values of British life – eccentricity, the creative amateur and civilisation. The Doctor meddles more now than Mortimus ever did. The Time Lords are tired of putting him on trial. He has started to become what he fights. There is one important difference between the Doctor and the Monk’s meddling: skill. When he was stabbed he thought it was for real and for what it revealed to him about Ace he has never been so pleased to be stabbed. He wants to give up finding things out in advance and he’s looking forward to being surprised.


Boozy Babe: When Jan died, Benny was hurt too. Only more slowly. Its just she’s not the sort to go blubbing on people’s shoulders. Ace is a soldier and the Doctor and Benny aren’t. Benny wishes Ace could see how much they both care about her. Bernice decided she was going to stick with the Doctor a little while ago. Benny hates combat, loathes it. She wasn’t particularly keen on the company of soldiers either. When he is stabbed it is Bernice’s reaction that affects the most. She really believes he is dead because it is Ace who pushed the blade in and she would made sure it was done properly. She realises she doesn’t know what his morals are but she does love him. In a shocking sequence she hunts Ace through the TARDIS, determined to make her pay for killing the Doctor. Sweetly, she hugs the Doctor to death when she is reunited with him. Without Bernice the Doctor would be terribly lonely and fail miserably.


Oh Wicked: Ace is a bloody demon, a bloody thing around Bernice’s neck. Benny thought she knew something about Ace but she was just testing to see if she could be trusted. Much of the book revolves around Ace’s story and the choices that she makes. She’s acting more rebellious than ever and is offered a new life by the Monk who is willing to give her Jan back. For a while the book convinces that she has turned traitor, stabbing the Doctor and sealing him in a vat on some abandoned planet. Ace thought when she returned she could go back to how things were but for Bernice (bloody) Summerfield. Fake this and fake that. She has the illusions that you can go through life as a hero. However she makes her choice and betrays the Monk, using a fake knife on the Doctor. When Ace lost her lover (Jan), the Doctor lost his best friend (Ace). She chooses to save the Brigadier rather than save Jan. She never wanted to hurt the Doctor…just show him what it was like to be manipulated. Ace likes the Doctor just the way he is. Thank bloody God.


Foreboding: Does this mean we can have some adventures with a happy TARDIS crew who enjoy their lives together? I’ve forgotten what that is like. 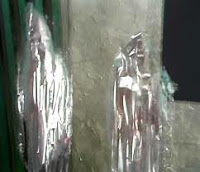 Twists: Big Ben’s clock tower explodes; it has a habit of doing that. The helicopter crash kills Molyneux, the Vardan agent in UNIT. The Monk keeps his TARDIS cold to remind him of his revenge on the man that left him trapped on the Ice Planet. Ace stabs the Doctor. The Monk freed the Vardans from the time loop and was granted special power from the Chronovore he captured. Firstly he killed an earlier Doctor causing an alternative universe (Blood Heat), released the Garvond (The Dimension Riders) and Huitzilin (The Left Handed Hummingbird) and finally put the Doctor out of the way in the Land of Fiction.


Embarrassing Bits: Where the hell do I start…?


* I remember a reviewer blasting the eighth Doctor into infinity, suggesting his characterisation was inconsistent. The same guy raved about the New Adventures. Well, this book features a Doctor who does not regret switching off the Silurian universe…after all there has to be someone who did these things. Just three books earlier the Doctor had promised himself he had given up the meddling. A change had been on the cards, long overdue in fact. All he’d wanted was a rest, a change of scenery. Some part of the Doctor abhors change because change in his species is so dramatic. Then at the end of No Future he decides to give up all his schemes again! Make up your mind mate.
* Pages 12 to 14 wrap up the last four books. Why bother reading them when this info-dump does all the work for you?
* Danny Painful more like. “Anarchy is more important than music!” is one of his better lines.
* Ace is pretty much unbearable throughout this novel until the last twenty pages or so. Beyond bitchy, past bullying, heading straight until new realms of irritation. She gets choice dialogue like: “You can just treat me like I’m not here and I’ll get off at the first place I like, okay?” and “No, the old days are gone. That’s history. You can’t change history. I just want you to piss off ‘cos you’re an irritating, selfish bitch who wants everyone to love her.” Had Ace not snapped out of it by the end of the book I may have had to take another break from the NAs.
* I remember people were appalled when the big villains at the end of the mighty eighth Doctor arc turned out to be the Council of Eight. Okay, they were hardly thrill a mniute but they were original and interesting. To end this arc we have the Meddling Monk joining forces with the Vardans using a Chronovore! This is who has been responsible for the troubles of the past four books? It’s not only unsatisfying…its irritating. Three of the most rubbishy monsters in Doctor Who history working together? What’s worse is that they all portrayed as being really stupid. The Monk just wants revenge, the Vardans couldn’t organise a piss up in a brewery let alone an invasion of Earth and Artemis the Chronovore is manipulated into saving the day with a few clever phrases and then when she realises she has been tricked just decides to leave. Where is the editor???
* The book is full of horrid in jokes which I’m certain are supposed to make us all chuckle but they are so tired and rotten these days I just groaned: “Like that chap with the eye patch – I still remember that witty story you told me about him…”/ “I was never happy with my slot you see – caught between Basil Brush and Bruce Forsyth.” Oh and the Doctor is kept alive through the underground press and fanzines.
* The Mediasphere is used to play the same tricks as Steve Lyons did in Conundrum except without the wit, the ingenuity and the imagination.
* Oh good grief – the Monk plans to hold an almighty rock concert and turn on a pacifier beam so the Vardans can come through and invade. What a load of tripe.
* Continuity vomits from No Future’s pages: Obviously the Monk, the Vardans and the Chronovores. The Brigadier, Benton and Yates also appear. The Monk was technical advisor to Yartek the Voord and the Moroks! To summon the Chronovore he needed the blood of Minyan, Silurian, Dalek, Human and Mandrel…using spheres from the Sisterhood of Karn. Was Gary Russell the creative consultant on this book?
* The Vardan Popular Front? Rebel Vardans? Oh please…
* Bizarrely, during the climax a rebel Vardan stops to tell Ace that the human he has copied had a transvestite brother.
* The Doctor makes the Brigadier forget all of the events of this book so he can meet him again for the first time in Battlefield. What the hell was the point of using him then?
* No Future even copies the ending of The Time Monster…this time with the Monk hamming it up (impressive in a book!) before an angry Chronovore.
* I know I have already mentioned this…. but the Vardans?


Result: Paul Cornell called this the worst book he has ever read…who am I to disagree with the author? I can’t remember the last time I read such a load of old wank (Warmonger?). No Future epitomises everything that bugs me about the New Adventures whilst forgetting about any of their strengths. Great swamps of continuity obscure the unrealistic plot, characters are re-introduced and misrepresented; the editor seems to have gone to sleep and lets some hideous dialogue and prose reach publication…after the heights of Conundrum it is such a shock to plummet to this level of nonsense. Anarchy is the tone but Cornell’s writing lacks conviction and as a result the setting refuses to ignite, and as the closure of an arc (that has for the most part been pretty damn good) it lacks any punch and the revelation of the villains still makes me roar with laughter. Like squeezing lemon into an already painful wound, the cover is also appalling: 2/10