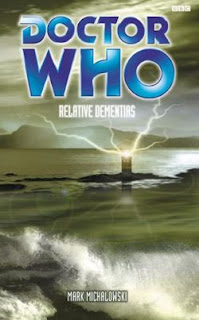 Mark Michalowski provided a fresh new voice when the Past Doctor Adventures were getting slightly repetitive and in danger of losing their readership. Relative Dementias was rightfully a popular book which juggled real life horror and bubbly humour with equal aplomb and manage to say something new about the Doctor/Ace dynamic, which had become a bit stale at the time. His sophomore book was the delightfully witty and sunny Halflife. Just escaping the concept heavy and depressing alternative universe arc, it was aptly placed to deal with some of the long term character questions of the range. A glorious role reversal for the Doctor and Fitz ensues and we come to realise just why they are made for each other but importantly new girl Trix received some fine development and for the first time the audience was able to care about her. Two New Series Adventures followed, Wetworld and Shining Darkness both of which are a cut about the rest of the series. Wetworld features more sombre writing than we are used to from Mark, odd from a writer who burst into the ‘adult’ ranges with irreverent humour but a pleasant change of pace from the fluffy but ultimately hollow nature of so many of the NSAs. Mark’s Shining Darkness is the superior novel, enjoying a fast paced plot, featuring some surprisingly moral and affecting questions and a hilarious and intelligent take on the wonderful Donna Noble. Mark also branched off into spin off territory, producing a detailed and juicy read in the Bernice Summerfield series, The Tree of Life.

Hi Mark and thanks for taking part. How did you get involved with writing Doctor Who books?
I bumped into Gary Russell at the BBC in Manchester, purely by accident, and after enthusing – embarrassingly – about his stuff, I told him out how I’d love to write something one day. And just a couple of weeks later, he emailed me, asking if I’d like to submit something for the very first Benny Summerfield anthology. And it just snowballed from there.
Was the selection of using the Doctor and Ace your choice for Relative Dementias?
Yes, totally. I loved the stuff that had been done in the NAs with them and fancied giving them a spin.
What has been your favourite TARDIS crew to work for so far and why?
Eeek! The silly – but probably true – answer is ‘The one I’m working with at the time’. Looking back, though, I think it has to be either the eighth Doc, Fitz and Trix, or the tenth Doc and Donna.
Halflife dealt with the very controversial issue of the Doctor’s amnesia – was this part of the brief or something you wanted to get your teeth into?
Nope, that was something I threw in. Much of it was added at the actual writing stage, rather than at the synopsis stage, because as I got to work on it, it seemed to arise naturally from the plot. I was terrified that Justin Richards was going to send it back saying ‘Oi! Stop it!’ but – thankfully – he didn’t.
The New Series has given the show a new lease of life. Would you say that is true of the books as well? Does a reduced word count make writing more difficult?
I think the NSAs have been informed, heavily, by the style of the new TV show and whilst I think they’re actually quite different to the NAs/EDAs/PDAs, I reckon they’re probably much closer to what viewers of the new series want from their books. And yes – for me, the reduced word count has meant streamlining – and, to some degree, simplifying – my stories. Which might not be a bad thing.
Martha Jones and Donna Noble, two strong characters. Who was more difficult to interpret on the page?
Martha, probably, because Donna – and, particularly, Catherine Tate’s on-screen portrayal of her – was much sharper and her ‘voice’ was easier to hear in my head when writing dialogue.
Looking back which of your books was the most fun to write?
Hmm… I’d probably say ‘Shining Darkness’ – although ‘The Tree of Life’ was great, too.
Would you go back now and make any changes?
Probably lots of little ones, but nothing major springs to mind. But that’s probably because I’ve forgotten all the things that jumped out at me when I read them back shortly after they were published.
What can we look forward from you in the future?
Well I’m writing a story for a certain DW-related-ish anthology coming out later in the year (I think), and I have another TV tie-in novel (not DW-related!) that I’m working on for publication at the end of the year. Which reminds me…. I really should be getting on with it, or I’ll get the sack!
Mark thank you for your time.
Not at all – it’s been a pleasure!
Posted by Doc Oho at 22:40