Last of the Gadrene by Mark Gatiss

Plot: Sinister happenings are going on in the quiet village of Culverton, the local aerodrome has been closed down and a new company has taken over, Legion International, who are planning set up a fully functioning airport. The Doctor soon realises something much sinister is going on, a last attempt at salvation for a dying alien race…

Good Grief: The Doctor is used to cutting something of a dash in his current incarnation. He likes slipping off into the mists of legend (good job really because he does it so well!). He finds the insistent hum and white of the console room inexpressibly comforting. Without the Doctor and the TARDIS, the UNIT laboratory takes on a sad, neglected feel. Jo asks the Doctor if the Brig, UNIT and herself mean anything to him and he falls deadly silent in contemplation. In possibly the most revealing piece of prose about the third Doctor we learn: (In the early days as UNIT’s scientific advisor the Doctor put on a good show of ignoring the Time Lord’s sentence but in truth he had found the route unbearable, stifling. The winter evenings were the worst, the black night pressing against the laboratory windows and for a while he had taken to wandering through the TARDIS as if they would lead him back to the wandering life he had known. But that was too painful, the paraphernalia of previous adventures bringing him sharply back down to Earth. After a time though something had changed inside him. He began to find the Brigadier less objectionable and more endearing. He secretly looked forward to each new problem. With the sun setting over this insignificant little planet…the Doctor began to feel…happy. When the Time Lords rescinded his exile he felt a twinge of something…excitement or fear? It was an uncomfortable fact to face but his first thought when he came back to Earth was that he was home.) The Doctor is described as falling like a giant bat, his cloak blossoming around him. The Doctor’s reaction to flying the spitfire is delightful. The Doctor and the Master had a falling out at the Academy because the Master went back on his word, revealing the Doctor was too trusting and unrealistic. In the poignant final sequence the Doctor seems quietly devastated that the Master might have been wiped out forever. 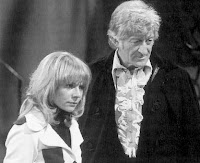 Dippy Agent: Jo likes sunbathing on the roof of UNIT HQ. She is proud of how the Doctor had come to accept her, first as a assistant, then as a colleague and finally as a friend. She wanted to move on soon but the thought of life after UNIT makes tears spring to her eyes. When she was younger, Jo was too scared to cross the pulsing darkness to her parent’s bedroom in fear of what might leap out at her. She is brave, confronting the unknown assailant at Whistlers house.


Foreboding: The Master’s apparent destruction at the end of this story could explain his emaciated state in The Deadly Assassin.


Twists: The opening is very nostalgic, a good taster of what is to come. Noah and Whistler investigate the strange goings on at the aerodrome, Whistler is kidnapped by the guards and Noah is scared witless by a creature in the marshes. The Chief of Staff is attacked in his bedroom by a glistening scuttling crab. There is a fantastic action sequence in chapter fifteen, climaxing in the Doctor’s assailant being sucked into the blades of a wind tunnel and blood raining down on gleaming white tiles. Graham Allinson being infected by his dad is pretty scary. When McGarrigle clutches the sides of his head, a creature like something between a crab and a worm is said to extracted itself like paste from a tube. The Master’s sudden appearance is delightful, just when you think it cannot get anymore traditional. Master’s eyes are said to burn like coals. The aeroplane simulator is a great deception, faking a crash and releasing the oxygen masks and the controlling crabs leap out and take their hosts. The attack on Bessie by the giant worm/crab is fabulous because you know exactly how this would look on screen with a season ten budget. In a classic Doctor Who sequence – coffins emerge from the swamp and the possessed villagers burst free – alien creatures filling their mouths as they shamble towards the village. Chapter 29 plays well with two Pertwee conventions; firstly you get see the Master hypnotise somebody from the victims POV and secondly you get to see a UNIT virgin experience his first taste of the Doctor, aliens and action. The Gadrene marked the Earth thirty years ago and recognised its potential as a fallback and now their world is dying they want to take over. The Master gets a great moment, taking down Bliss with the TCE. Whistler’s plane destroys the entire Gadrene race in the energy backlash when it crashes into the transmitter. 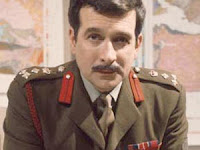 Funny Bits: “My dear Brigadier. Running errands is not my forte. If you want someone to pop around and see your old friends I suggest you try the women’s institute. I believe they make excellent jam.”

“Despite your best efforts Lethbridge Stewart, I have not yet succumbed to the level of petty bureaucracy in which you seem to revel. If there’s any toadying to be done I suggest you do it yourself!”
“Dear me, always the bridesmaid, never the bride. How does it feel to always be someone’s lackey?”
“As the Brigadier’s pet monkey, I should imagine you’re much better placed to answer that, my dear Doctor.”
Embarrassing Bits: “What’s up Doc?” – I suppose someone had to say it sooner or later.The Master’s motivation as ever is shallow; he wants revenge on the human race and the Doctor for always foiling his plans!

Result: A fine love letter to Jon Pertwee and Terrance Dicks, this wraps you up in a lovely warm glow of nostalgia throughout. The strength here is the sincerity of the writing, this is not somebody who wants to take the piss out of the conventions of the third Doctor’s era but revel in them. Mark Gatiss is a good writer and his prose glows with colour and descriptions that are within touching distance. The plot has all the right elements to make it work and the aliens are nasty but sympathetic. There’s a lovely thoughtful moment where we discover just how much the Doctor has grown accustomed to his life on Earth. Read in a threesome with Verdigris and Rags, they show very different but all enjoyable sides to the Pertwee era: 8/10