Plot: When a strange artefact is discovered in an Antarctic base it opens up a whole can of worms. The Doctor is unsure why the Elder Things from fiction seemed to have sprung into existence and why a group of war hardened Time Lords have taken on their form…?

Top Doc: I should start out by saying that this is a book of ideas rather than decent characterisation and in the grand scheme of the book the characters are merely there to pilot the ideas. Saying that there are some clever observations made here.

The Doctor refuses to be beaten and is still trying to find a way back in to the Enclave. He has had enough of evil whatsits from the dawn of Time and thought he had dealt with them all in his last regeneration. I loved it when he is said to have children’s teatime sensibilities. He is described as a rogue element, a symbol of independence and wasteful initiative. His adventures have become lurid and speculative fiction that the future Time Lords read on the quiet (hmm…). Overall he really isn’t that involved in the narrative, he strikes a blow for the war TARDISes at the end but he is fighting the million other characters of page space most of the time.

Scruffy Git: Thinking with his nob as usual, Fitz wonders if he’ll ever have Compassion but thinks this will only occur when she has a personality transplant and he gets drunk. He misses Sam, either Sam. It is interesting to hear that he has been worried for a while whether he will inherit his mother’s mental illness. It’s not really relevant to anything but Fitz is technically the first man to space walk. Pretty impressive. 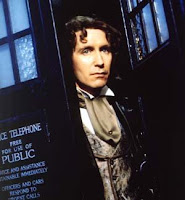 Stroppy Redhead: This is Compassion’s book through and through and is described as being Remote in every sense of the word, independent, unpleasant, cynical and amoral. Somebody actually asks her if her name is ironic. It is a real eye opener when she communes with the War TARDISes and listens to their tales of rape and torture. Turns out she trusts the Doctor’s instincts and he thinks of her as a machine clothed in flesh. In a tense moment she chooses to do what the Doctor would do, protect the Earth. And when she dreams of the War TARDISes free of bondage, she smiles a rare smile. Lovely.

Foreboding: Homunculette and Marie discuss Compassion at the books climax. “You mean you don’t know who she is…?” asks Marie.

Twists: The Museum of Things that Don’t Exist is a great, I would have liked to have explored its exhibits more. The Helicopter crash is terrifying. When we realise that agents of Mictlan and future Time Lords involved with the War are around the importance of what is happening is stressed. I loved the UR boxes, signalling to the vortex that everything is normal in time whilst the Times Lords invade a period and make changes. The Celestis use record ships to monitor Mictlan, being creatures of pure thought they are terrified of change, so when a house goes missing they are understandably paranoid. I was gob smacked when it was revealed that the Time Lords are trying to control the Fendhal to use as a weapon against the Enemy. There are nine other Gallifreys, copies secreted in pocket universes so that if one falls in the War their legacy will survive. The War TARDISes are a fabulous concept, machines built to swallow moons and drain stars of energy. I adored the moment when you realise it was Compassion who was spat from the time machine in the future, finally the heavy plotting starts to make sense. Things get even scarier when we discover the Celestis pushed forward the evolution of the Fendhal, a device to eat all meaning. In the packed, terrifying climax, we realise that One wants to destroy his own home (Mictlan) as it is like pollen to bees called Swimmers who would destroy the entire universe. The Doctor uses the war TARDISes like scalpels, cutting away Mictlan (and the Fendhal Predator with it) and takes them to the furthest range of the TARDISes limits.

Embarrassing bits: Omega’s Orifice! is an exclamation used. Just as nature abhors a vacuum, Lawrence Miles’ concepts seem to abhor a plot. This has hundreds of clever notions swimming around but they really don’t cohere into a satisfying narrative. Splatter collage is one idea too far, digging out the contents of someone’s head and making pretty patterns with it. Compassion actually says “Nosy parkas in Parkhas!”
Funny bits: The Doctor is like a tornado in one of his energetic moods. When the Doctor and Compassion discuss the parallel canon, Fitz compares that to them comparing the merits of pointed sticks. The Doctor, Fitz and Compassion play guess who the Enemy is with hilarious results. The reason so many Time Lords are so narrow minded and dull witted is because the responsibility of infinite power is so great, they are trying to avoid becoming corrupt like the Master, etc. The Doctor’s assistants are described as bipedal sheep who follow him around and contribute nothing. Apparently the 1970’s is the peak years for alien invasions, a weekend could not pass by without some three headed bastard demanding the brains of Earth’s poodles.

Result: Great set pieces, terrible narrative, this is a book of a thousand wonderful ideas bound up in near-impenetrable prose. It took me two weeks to read this because it required so much concentration (my average time to read a book is two days) and in places I really struggled to go on. Saying that the best parts of this book are extremely brave, clever and rewarding. I’m sure with some tighter editing this would have been a lot more accessible but it wouldn’t feel half as risky or as unique as it does. This is a bold experiment in a time when the books were finally exploring exciting new ground; it reminds me of the best and the worst of Virgin’s output, challenging work but not recognisably Doctor Who. Maybe that’s a good thing though, I certainly don’t regret polishing this off and I may return to it again one day to see just how daring the books could be: 7/10
Posted by Doc Oho at 04:04