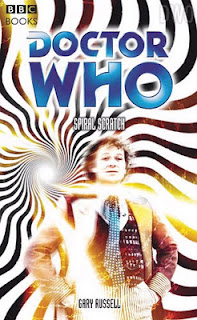 Theatrical Traveller: Gary Russell has always been able to capture the sixth Doctor really well. I think he has a definitive image of this much criticised incarnation, one that is far fluffier and cuddlier than the guy we saw on the television. He pushed him in that direction with Big Finish but Colin Baker was still on hand there to give the Doctor some bite and he has really let this far more pleasant Doctor flourish in his novels and yet he still can’t resist leaking in some of his more theatrical and annoying extremes. They are part and parcel of the character no matter how much you try and dress him up as something more approachable. This is perhaps the ultimate sixth Doctor novel (don’t mistake that with the best), a multi Doctor story that finally has the guts to be about various assortments of the same Doctor and we are introduced to some intriguing alternatives. I could bang about the problems with this novel as long as you want to hear them I still couldn’t deny that Spiral Scratch leads up to a moment of self sacrifice with emotional consequences rarely seen in the books and with a final chapter that beautifully explores how much we have come to love the sixth Doctor. It may contradict Head Games (who cares?) but this is a very worthy final end for my favourite Doctor.

The Doctor always won arguments. What on Earth was he wearing? The Doctor has a nice smile even if his fashion sense borders on the disastrous. When he beams it is easy to feel warm and comfortable around him. One of the alternate Doctors is black cloaked with a scar on his face and comes from a universe where England is still an Empire with Empress Magararita is on the throne. The Doctor has a Tigger look and curly hair like Diana Ross! He can be a big baby sometimes. He threatens to punch Rummas on the nose for all of his interference. Sophisticated, elegant and remarkable or a blowfish with an over inflated sense of self importance. The Doctor would happily sacrifice himself, use himself as bait. I love the myriad of sixth Doctor’s from alternative realities – a little touch of magic when we see the Doctor and Evelyn and the Doctor and Frobisher. I know some people get upset when writes suggest these different ranges exist in different universes but as an excuse to bring together all these wonderful sixth Doctor’s we have been privy to I can think of worse storytelling techniques. All of them are sacrificing themselves to save reality – what a guy. Each an every sixth Doctor is giving his life to ensure that his personal timeline will live on. Looking at the stars he has saved the Doctor thinks his sacrifice was worth it. He feels he has had a good innings and cannot complain this time.

Screaming Violet: Its really odd that Gary Russell, champion of Melanie Bush in the Doctor Who novels should get her so totally wrong in her last book. The Mel we saw on TV was a bubbly, perky, melodramatic fitness freak with a lust for adventure and totally in love with both of her Doctor’s. The Mel of Spiral Scratch is a depressed, downbeat, miserable, bitchy, swearing, moaning sort of girl who argues with everything the Doctor says. It’s the worst thing about the book by far and a real shame because had this been corrected Spiral Scratch would have scored even higher. Russell tries to fill in a lot of the gaps in Mel’s life but a lot of it doesn’t ring very true (the Shag Palace!!!).

Described as a wrapped up boiled sweet, Mel is wearing her pink and white puffed up costume from Time and the Rani which should give you a clue as to where this is leading. With Mel its all black and white unlike the Doctor who can really spin a yarn. Lately Mel has had a pang for Sussex and her parents, a comfortable living room at Christmas, dates, walnuts and figgy pudding. She’s also have odd memories of a troublesome sister… Oddly whilst Helen Lamprey is being friend Mel’s only thought are to punch her lights out and thinks lovely thoughts like ‘die bitch die!’ When they first moved South Mel’s mum always threw impressive dinner parties to try and fit in. I rather like Melina the slave, its an intriguing take on the Doctor/Mel dynamic. There’s a lovely scene where we think we are with our Mel and the Doctor but it transpires it is Melanie Baal the Silurian! Mel sneakily tries to find out about her own future. Does Mel have a sister called Anabel that she knows nothing about? For Mel Pease Pottage is the home that says love and the TARDIS is the home that says friendship. Mel broke her eighteen month sister like a biscuit? She isn’t sure what happened to Peri and she isn’t sure the Doctor knows either. I really liked it when Mel, Melanie Baal and Melina all join forces to save the Doctor – the madness starts to cohere. The Doctor is a father figure to Mel, they needed each other.

Foreboding: Lakertya is on the edge of this system. Turns out the Doctor was dying all along when the Rani’s tractor beam buffers the TARDIS! 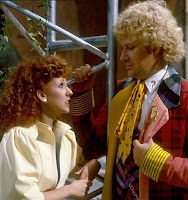 Twists: Chapter one is surreal but it certainly peaked my interest. The story of Dominique and Julien is lovely, a fairytale of two green children who turned up in a village to cure its ills. I could have read a whole book in this vein. Several versions of the Doctor turn up in the console room to warn him of the Lamprey. Chapter four is actually a very beautiful piece of writing, probably the best thing Russell had written to date as Mel’s parents say goodbye to her dead sister before moving away. Rummas obtained a TARDIS and nips into burning buildings and saves books that would otherwise be lost. Lots of dead Rummas’ and dead Doctor’s? There are temporal shenanigans centring on the library on Carsus, a pan dimensional rip, a scratch right through the groove of the vortex spiral causing jumps and gashes. When a Lamprey snatches away somebody time makes adjustments and installs a new person to take their place and fiddles with the details to make sure everybody thinks that has always been the case. Maddeningly (but also quite fun) you can’t tell if you are reading about the same character from scene to scene or one from a different universe! In one universe we visit Utopiana City wrecked by the Lamprey, chewing up concrete towers and spitting out the rubble to crush the inhabitants. Chapter seven is a moonlit flit through various realities whilst the lamprey devours the best of each reality. Cleverly the story crosses through interstitial time and tells the same narrative with different versions of the Doctor and Mel. The lamprey devour time, extinguishing entire multiverse of realities just to fed. It needs a focus, someone to home in on and break through into that reality and they seek out time sensitives and use them as an anchor when they arrive. Rummas has stolen a Spiral Chamber from Gallifrey. I like how Russell plays the same scenes over from the POV of the opposing characters – pages 137-139 are the same as 41-43. If the Spiral were to become damaged and allow leakage within realties all creation could descend into chaos and only the Lampreys would survive. Monica is the green girl from the opening chapters, the female Lamprey. Sir Bertrand is also a Lamprey who blocked his memories so he could forget who he is. Chapter sixteen features Helen’s party again but this time its told on a space station rather than a country manor house – these parallels are boggling! Rummas caused the moment where chaos was unleashed upon creation. Every action he has taken to go back and prevent what he has caused has been anticipated and negated by the Lampreys. This filth is going to destroy everything, past, present and future just to its bloated existence. The chronon energy the Doctors have built up tears free and kills all of the sixth Doctor’s and the Lampreys.

Embarrassing Bits: A cover more garish than the sixth Doctor’s coat, Simon walked into the bathroom whilst I was reading this in a steamy bath and asked why I was reading a murray mint! Why doesn’t Russell learn from the mistakes of his previous books, like Instruments of Darkness come chapter three there are too many characters and choppy scenes with no momentum. Sometimes the prose is just…yuck (page 100 –‘clearly facing the same treacle effect’). The Last Resort did rather a better job of playing the trick of shifting to a different universe from scene to scene and built up t a spectacularly surreal and exciting climax but then I simply think Paul Leonard’s prose is superior which automatically makes things easier. The Earth Empire, the evil Nazi’s and their space conquering Fuhrer were finally destroyed – given the imagination he displays here surely this is the least imaginative alternative universe imaginable? 117,863 Mel’s – the mind boggles! Oh come on…Mel used to live in ‘the shag palace’ when she was at university and whilst she pretended to be prim and proper she secretly loved it! Mel saying ‘Screw you. Bitch!’ is just plain wrong and following that up with a right hook is even worse! ‘Why are you so pissy all the time?’ is a another horrible Mel line.

Funny Bits:
· We get to read an extract of Benny’s view of the Time Lords – ‘Time Lords are like that. Gits. Pompous gits of the highest order. No one likes them very much. Because they’re gits. Big, fat smelly ones.’ The Doctor mentions it is ‘written I believe by some grumpy Professor or other.’ Mel likes her which is ironic consider she would hate her in Head Games!
· The Doctor wrote ‘The History of Gumblejack fishing in the eighth galaxy’, did signings, dinner speeches and made a fortune and donated it to charities the universe over! He became known as the Great Benefactor! This might be a lie.
· ‘Sometimes you can be infuriating!’ ‘Only sometimes? I’m slipping…’
· Page 153: ‘I’m waiting thirty minutes for your response and using software to speed up your words so I can understand them.’ ‘Oh.’ ‘That wasn’t worth waiting for!’
· ‘It’s alright I always get a twinge when I discover myself dead. I think its times way of telling me to watch myself.’

Result: Ignore the odd horrendous Russell turn of phrase, this book is a kaleidoscope of wacky imagination and clever ideas. There are problems for sure but considering this range has already flogged the alternative universe angle to death Russell manages to find lots more interesting things to do with the premise including a multi Doctor story with the same Doctor, some delicious end of the universe action which feels genuinely apocalyptic and a truly climatic finale with a deeply moving finale chapter. The story is not especially well structured, each chapter feels like a short story in an anthology with some being rather good and others not so but astonishingly there is the odd dribble but on the whole a distinct lack of fan wank. ‘It’s very complicated’ says Mel – too complicated, you could happily snip a handful of characters, dodge a few pointless revelations and make this story a smoother ride. Spiral Scratch is ambitious and brave and even if the author doesn’t quite have the skill to pull off the insanity of the ideas coherently there is still a great deal of fun to be had here: 7/10
Posted by Doc Oho at 08:07