Prisoner of the Daleks written by Trevor Baxendale 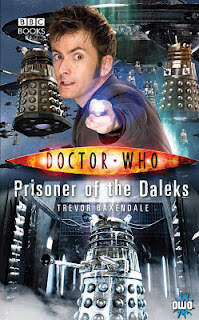 Plot: When the TARDIS jumps a time track lands back in the height of the Dalek Empire, the Doctor has to use all of his wits to prevent his greatest enemies from using time travel to turn the tide of Dalek history and irrevocably change the events of the Time War…

Mockney Wanderer: A huge glob of spit in the eye for all those people that dismiss the NSAs as having poor or no characterisation of the Doctor. Not only does Trevor Baxendale perfectly capture David Tennant’s wide-eyed Mockney Doctor but he also manages to scare us with the Doctor’s uncontrollable terror of the Daleks. There are some beautiful observations about the relationship between the Doctor and Daleks and the humans behave in equally obscene ways to the point where the Doctor begins to feel sympathy for one of the tortured creatures. It’s a remarkably intense portrayal of the Doctor and one of his best in print. Exceptionally good.

At the beginning of the book the Doctor and the TARDIS are having something of a domestic and she refuses to take him anywhere interesting anymore. I loved the observation that the Doctor has gotten on the wrong side of enough spiders in his time to keep well clear. It is noted that he wears a very tight fitting suit (ummm). His escape method is to tap out a morse code with a teaspoon! When he sees something of Martha and Donna in Stella the Doctor feels a longing for her to go with him. He never truly understands what happens to people when they die. He has too many bad memories, too many nightmares about the Daleks to feel anything but revulsion for them. He understands the creatures implacably, ‘They want to drag you into a long drawn out war because that’s what they like. Destruction, killing, slaughter, extermination. It’s what they do.’ The Doctor gets angry when he sees the remains of Auros; he finds it a stupid waste to destroy the planet since a self-inflicted wound of this intensity saves the Daleks from bothering. It’s the Doctor’s cold, quiet terror of the Daleks that makes them so frightening. His violent, suicidal rant at Bowman is genuinely disturbing. When the humans start tormenting the Dalek mutant the Doctor questions whether the Daleks have already won, losing their humanity. When the Dalek lets rip its first agonising scream the Doctor sinks to his knees in the corridor – this is some remarkably vivid characterisation. He longs for his companions of old, somebody who understands. He understands perfectly when Koral admits she is the last of her kind and if she dies there is nothing left of her civilisation. The Dalek prisoner thinks the Doctor has come to gloat at the end of its life. He tells the creature that their reign of destruction will end in burning and that there is a storm coming. In a rare moment of levity the Doctor is thrilled at the very notion that he is seeing something new that he has never seen before when they land on Arkheon. Apparently he hates name dropping (yeah, right) and is deeply embarrassed that he has to tell the Daleks who he is! It’s a great moment, he whispers his name to a Dalek and its headlamps flash involuntarily and its gun stick twitches. The Doctor is clearly revered within the Dalek echelons since the meeting between him and the Inquisitor General is made with a shivering thrill. The Doctor likes impossible. Dalek X sums up the Doctor as having above average intelligence, continually changing his appearance to avoid detection and relying on fortuity. He hates continuity (yay!). I loved Bowman’s comment, ‘Don’t cry, you’ll set the Doctor off, you know what a wimp he is.’ Its great to see the relationship between the Doctor and Bowman, how he is forced into respecting the Time Lord by his sheer drive of positivity and determination to survive. He insults, abuses and generally distrusts the Doctor throughout but before the end of the book they exchange slight smiles. There is a great image of the unrelenting tenth Doctor visiting Dalek X trapped beneath the surface of Arkheon never to be discovered and telling him that the Daleks always lose because they never learn, because everybody in the universe is better than them. I questioned the logic of having the Doctor travelling alone for the last of the Tennant books but Prisoner of the Daleks totally justifies the idea. He is a lonely force of nature and absolutely riveting to read about.

Foreboding: The Time War is mentioned several times. It must be tempting for the Doctor to tweak events whilst he has managed impossibly skip back before the War and change things in the Time Lords favour. 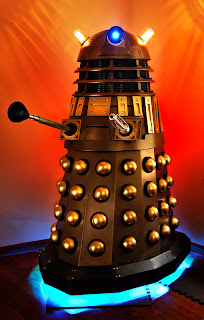 Twists: That’s a fantastic cover; it had me practically salivating when I first saw it! There is a delicious Nation-esque beginning set in a macho location with the doctor falling into a logic trap like a fly caught in honey. The mention of the Dalek heartbeat and the awesome comic strip Dalek font caused a fan boy thrill to ripple through me. Stella has a piece of exploded fuel tank jutting from her thigh and bleeds profusely before being exterminated; this is one book that does not respect its nice characters. What about the image of the icy Dalek, dripping with icicles. Dalek armour learns and adapts. Bounty hunters receive a bonus for every Dalek eyestalk they bring back. The Dalek Generation are orphans who have lost their parents in the Dalek War with the Earth Empire. There are enough self-destruct explosives inside a Dalek to keep a bomb disposal squad busy for a month. Spooks are Earth military intelligence agents. We are greeted by Auros on fire, the planet burning and breaking apart. The Osterhagen Principle is to detonate warheads to stop the enemy getting hold of the planet. In an inevitable moment of mass slaughter the Daleks surround the Auron fleet and destroy the lead ship as an example of why they should surrender. Page 78 features a truly spine chilling revelation about the Daleks, that they can blast a human to death in a split second but they deliberately turn down their weapons when exterminating their victims to make sure it hurts and lasts. The Dalek mutant is described as ‘something pale and wet moved like a slug amongst the exposed machinery.’ They gouge the mutant free of its housing like an oyster from a shell and its accompanied by a foul stench of pure wrongness. The dying Dalek is a ‘distended brain sac lying like a rotten melon, squid like arms coiled around the carcass.’ The Arkheon Threshold is a tear in time and space at the heart of a planet torn asunder by the Daleks. A pale, wraith like world, shrouded in mists and shimmering ice with one half of the planet a glowing molten core exposed to space like a luminous scab. The Dalek planet splitters are like hitting an apple with an axe. Imagine reaching the mist shrouded molten rock at the edge of a planet? The exposed molten core of Arkheon broils and spits cauldrons of fire into space. Daleks love prisoners; humiliation, torment and slavery are their thing. The Dalek experimentation facility is called the Black Hole because once you go in you never come out. How scary is the thought of Daleks with surgical instruments instead of suckers? The Wayfarer is blown up in front of Bowman and its remains scars the snow for hundreds of metres. The truth is that the Daleks are losing and they want to use the Arkheon Threshold to change time and turn things in their favour. Anger is something that every Dalek knows. One truly magnificent scene sees a Dalek crushed by an invisible magnetic fist and the creature inside is forced through the splits in the metal armour! The story ends on a fantastic planet-bursting explosion, which ruptures and disembowels the most devastating Dalek warship.

Funny Bits: Tenten 10 is the decimal planet!
‘Between them an your lot, it’s a wonder there are any planets left in the galaxy!’
Apparently the TARDIS is designed to blend in and come and go like a whisper in the night…what went wrong?

Result: A fantastic read. Unexpectedly adult and graphic with some devastating psychological moments, this is a cut way above your average NSA. What I really loved about this story was the mention of the mock sixties things like ‘Space Major’ and some of the more Saward-esque macho dialogue, it’s a real love letter to the Dalekmania that spread through the classic series whilst never forgetting the fantastic innovations of the new series. The Doctor is really put through the wringer and makes some fascinating observations about the Daleks and we learn so many new and wonderful things about the creatures beyond their ability to exterminate. Add to all of this Trevor Baxendale’s most accomplished prose to date, some stunning imagery and a cracking final scene and you have a book which scores very highly on every count. I wouldn’t want every book to be this intense but it makes for a gripping change of pace: 10/10
Posted by Doc Oho at 08:37