The Monsters Inside written by Stephen Cole

Plot: Rose finally gets to visit an alien planet! Unfortunately it is very like Earth and she is soon banged up in prison with the big squeeze after her blood. The Doctor is put to work in on an antigravitational project, which is part of a larger masterplan that will see planets squeezed through apertures and consuming other solar systems. All the while the Slitheen and their rivals the Blathereen watch on…

Northern Adventurer: Of the first three novels it is Steve Cole who nails the ninth Doctor. Each of the three novels has their problems but they all get one thing very right – The Clockwise Man manages to transfer the TV series successfully into novels, Winner Takes All captures Rose and her family beautifully and The Monsters Inside has a fantastic portrayal of the short lived ninth Doctor. The dialogue is rough, clipped and full of northern attitude. If only all three novels could have got all things right…oh wait Only Human is next!

Up close there is an intensity to him that crackles through every moment, every look. The Doctor notices the torture and oppression of the humanoids in the prison and notes ‘they act human too’ of the warders. If anything happens to Rose he promises to show them a monster. I love the idea of the Doctor bunking up with a pair of Slitheen and their horrid sticky nests! They think he is as ugly as a human but his scent is rare and subtle. Described as brash and distracted and ever so slightly sad. A tough little morsel. The Doctor has an eye opening moment of scientific erotica with Nesshalop where they forget they are in a laboratory and work together to solve their problem in an intense and powerful exchange. Apparently geniuses never see the possibilities of their own work. Making ¤¤¤¤-ups at the right time is his skill. Taking risks, pushing his lucky are the usual for him. Is this the only novel where the Doctor encourages arson as a solution? We get a glimpse of that ‘no second chances’ Doctor when he turns Don Arco’s candles into balls of flame knowing that he needs them to breath. He feels no sense of triumph that his solution cost so many lives and leaves the tale slightly deflated.

Chavvy Chick: Not so great for Rose if I’m honest, she has a few moments of intellect but she’s pretty much the generic Doctor Who companion otherwise. Finally stepping on another world Rose realises she is officially somewhere else. When travelling she gets a sense of belonging she’d never dreamt possible. A human bit of skirt? She’s handy in a bitch fight and causes a very messy food fight! Jackie always said it would be Mickey that would end up in prison. When she was 13 Rose dated a rubbish kisser but a genius food fighter! We all know she is in trouble when she has to convince that she is genius in order to be reunited with the Doctor! She manages to sell her intelligence by reeling off her mum’s telephone number and useless trivia about Eastenders! Rose wonders if the Doctor ever finds her annoying for asking so many questions. She realises she is starting to sound like the Doctor. When landing in the Doctor’s arms Rose still feels as though she is flying. She is remorseless at the Blathereen causalities, feeling that they did it to themselves. The Doctor’s final thought is a bit too Jerry Springer for Rose.

Blaidd Drwg: ‘The big Bad Wolf’s ready to blow our house down!’ - Hmm surely you could have thought of something a little subtler than this!

Twists: Justice Alpha is a designated prison planet. The entire solar system is a prison, a scientific labour camp. Justicia approached EarthGov and offered to handle their overspill of prisoners (and almost had their hands bitten off). Justicia develops pioneering strategies for law enforcement, punishment techniques and mental correction. The Globs are like enormous wads of chewing gum flexing in and out of shape as though invisible mouths are still chewing them! Norris is an undercover EarthGov 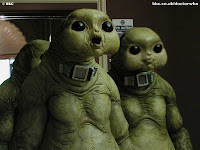 agent who has been deep undercover for 9 months and meets an untimely end when his neck is snapped with the sound of cracking eggshells. They are harnessing the energy of an entire solar system to create a cosmic centrifuge, which will open up shortcuts through space. Rose is stuck on a ship that ‘drops from the sky like a stone.’ Ugh, thick yellow pus drips from a punctured Blathereen’s eye! In a hilarious moment we realise that Ecktosca and Dram are hiding inside Globs – super compressed! Don Arco is the Blathereen big cheese, creating a giant super portal for the entire Justicia system to pass through. Their plan is astonishingly murderous, using a solar flare compressor (the biggest flame thrower in the universe) to incinerate worlds in another solar system before Justicia jumps through. The destroyed planets will create a stockpile of fissile material and with a bred labour force processing it the Blathereen will make an absolute fortune! Auntie Callis murdered Maggi and used her body to incite a riot and find her nephews. The New Washington system is 12 worlds, 4 inhabited and the first Blathereen target. Don Arco has his throat slit by his ambitious sister, her sharp claws ripping out his neck. The Blathereen mother ship is crushed to the size of a postage stamp. That Ecktosca…he’s a tricky one, he hid inside Don Arco’s corpse to escape! The Slitheen are back in business…

Embarrassing Bits: The first chapter is appallingly underwritten, a fatal error. The words ‘bitch’ and ‘slut’ are bandied about quite a bit considering these novels were supposed to be aimed at a younger market. There are some seriously underwritten characters, a fault that would plague the NSAs until they found their groove, sacrificed to the plot with only surface details known about them. Considering it is not packaged as a revelation in the book why aren’t the biggest selling point on the cover and in the title? It comes to a point in this story where everybody seems to be a Blathereen in disguise – it all starts to feel a bit Invasion of the Dinosaurs.

Funny Bits:
· The Slitheen have pictures on their cell wall of them peeking cheekily out of half shucked body suits of Meeps and Kraals!
· The Slitheen aren’t bad

company once they get used to not being able to kill you!
· The punishment for benefit cheats is to bang up their children! Are you listening Conservative Party?
· ‘We’ve done your planet so often we should get T-shirts made up.’
· The sickest knock knock joke ever – crushing and splintering the governor’s skull with two taps!
· ‘The Blathereen Patriarch. May plaque brown his belly.’
* ‘Oh come on, a dirty great solar system whizzing through space, hardly the most inconspicuous of getaway vehicle.’

Result: The weakest of the first three NSAs but still with plenty to recommend it. Steve Cole makes the deadliest of mistakes and underwrites his entire first half of the novel and for a long while it is nothing but standing around talking technobabble. The second half is much, much better, the Blathereen and Slitheen prove to be great fun once they join the plot properly, the Doctor is beautifully characterised and the sheer enormity of the plan to shove a solar system through space for profit makes up for a lot of underwhelming action earlier on. Cole keeps the dialogue light and fun but he only lightly characterises his cast so it is hard to give a damn about many of them. Some editing to tighten up the plot could sort out a lot of this books problems but for all my complaints I raced through the last half and enjoyed a fair amount of it: 6/10
Posted by Doc Oho at 05:59