Plot: When Mickey discovers a statue of Rose in a museum, the Doctor takes her back in time 2000 years to make it happen. The truth behind the statue reveals that you should always be careful what you wish for…

Mockney Dude: The Doctor doesn’t do rewards. The Doctor sitting in an orchard under a tree with peach blossom sprinkling is a lovely image. He turns heads wherever he goes; it’s a burden he’s learnt to live with. Doing things that have never been done are his speciality. I love the scene where he half inches Rufus’ horse, first making sure it is morally acceptable! The Doctor is appalled at how many species will make extinct because of the gladiatorial games. How fun are the scenes of the Doctor being promised his freedom and being tricked into the arena where he faces lions, tigers and bears – ‘oh my!’ The Doctor is pretty awesome in the arena, jumping on the bears back and using his pals John, Paul, Ringo and George to defeat the animals without spilling their blood. The crowd wants blood and alas it turns out to be their own as the animals leap into the audience! He’s a terrific showman, bringing statues to life and doing tricks. The Doctor is not known for his forgiving nature. When the Doctor is on a mission there is no way he will be distracted. When he thinks he has killed Rose he hates himself for it. Rose isn’t ordinary and the Doctor wasn’t going to wrap her in cotton wool and protect her from everything. He is caught in stone at his most Doctorish, trying to save somebody’s life. I loved the idea that the Doctor can see things that once happened even if they haven’t happened any more.

Chavvy Chick: Just brilliant, as soon as I am about to write off Rose as a literary character Jac Rayner comes along and proves me completely wrong. Read on… You have got to love Rose’s mother, she is the ultimate chav! Jackie frowns on Rose paying to enter the museum when you don’t have to (plus she wants to find out why the Doctor doesn’t wrinkle and wonders if they can make a quid or two with the secret). Rose quite rightly admits that lying on a sheepskin rug whilst Mickey’s mate pervs over her isn’t quite the same as posing as a Goddess for an ancient Roman. Can you imagine watching Rose in a Winnie the Pooh bedsheet Toga! Both Roman hygiene and their treatment of their slaves really bothers Rose. She thought of her own life at sixteen, GCSE’s, falling in love, dropping out of school and leaving home…it all ended in heartbreak and disaster of course but at least it was living. Rose is slightly nervous about eating a Roman meal but after living with her mum for most of her life she reckoned she could cope with virtually anything down the food line. To the setting sun, the time between where Rose was now and where Rose came from was no more than a blink. To Rose who had seen the both the dawn of humanity and the very end of the Earth it suddenly seemed like an eternity. In a way Rose has achieved a kind of immortality, in 2000 years she would be born and in 200,000 years she’ll be on a space station fighting Daleks and a long time after that she would watch the Earth die. Shareen and Rose got pissed one evening, planning to go to Danny Fennel’s party and they both fell asleep and missed out. Mickey admits that Rose was too good for him and that he didn’t deserve her. He thought he was the luckiest man alive to have her and when she went off with the Doctor he thought she had finally seen through him, realising that she was a winner and he was a loser. Mickey is described as a puppy that has been kicked. I loved the scenes of Rose trying to figure out what her own unconscious wishes have prevented. You have got to love Rose’s imagination, she has a chance to dream up anything into reality and she begins with a bag of chips! Rose worryingly asserts that everything she is experiencing from now is all a product of GENIE’s poking around in her mind! Its wonderful that Rose left a few bits for the Doctor to sort out because she didn’t want him to think she was taking over!

Twists: Rome has a population of a million and Rose compares the market place to Oxford Street at Christmas. Gracilis’ son has gone missing and there is a woman who can tell the future – are the two related? Vanessa knows about Hadrian’s Wall that won’t be built for another years and two places that won’t be named for a few hundred years. Ursus is somehow turning people in real statues. The Doctor realises that he was never meant to find Rose’s statue in the past otherwise she would never have been in the museum in the first place as a catalyst to send them to Rome in the first place! Vanessa simply wished to be in Ancient Rome and abracadabra…she was! Is turning slaves into pieces of art more humane than having them slaughtered in the arena, an interesting point. The reason the Doctor couldn’t find Rose was because he was always going to go back and save her before he started looking! GENIE is a Genetically Engineered Neural Imagination Engine that brought Vanessa to Rome from the future and gave Ursus the ability to create statues with his bear hands. In order to time travel again GENIE needs the intake of 1,718,902 dead bodies! I love all the ‘its hardly my fault if people aren’t precise with their wishes’ scenes, being able to make wish is really made out to be both a blessing and 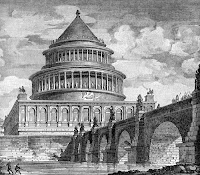 a curse. Chapter fifteen where the wishing all gets out of hand with naked dancers, concubines, fake Emperors, babies and Rose wishing that both her and Vanessa are safe and everybody disappearing! Through logical progression Rose manages to figure out that GENIE doesn’t have the ability to shape reality but is able to alter the perceptions of the wisher so it appears that they have come true. Just with the prototype GENIE’s things got out of control, spreading all over the planet, the creators failing to consider the strength of envy. Humans are never satisfied and they wound up wishing the planet to death so they went back in time to stop themselves inventing them in the first place. At the climax they have 8 hours to get the phial to the earlier Doctor…but it’ll take 20 hours from where they are so they have to get to the TARDIS and go back in time 12 hours to make sure everything goes smoothly!

Funny Bits:
· It takes Rose a little while to realise she is wading around in Roman piss!
· We have the Doctor’s David by Michelangelo, Rose – Next Top Model and Rose Tyler, Warrior Barbie Doll!
· ‘I remember this brilliant one. There was this bloke, a musician, and he thought he was there to play to the crowd. Then halfway through some tune they let the animals out. He thought it was a mistake and he’s running around, trying to get them to let him out but of course they don’t. So he tries charming the beasts with his playing like he’s Orpheus in the Underworld.’ ‘Did it work?’ ‘Nah, reckon the lion what got him wasn’t much of music lover.’
· ‘Excuse me madam have you seen my as?’
· Mickey on the Doctor: ‘Are man skirts in this season?’
· 'You better not have signed my bottom!’

Result: Jac Rayner is back and has written another brilliant ray of sunshine. The Stone Rose was an absolute delight, not only a fun visit back to Ancient Rome but also a terrific puzzle book that sets up an impossible situation and has great fun trying to get out of it. Both the Doctor and Rose are written out from the action for a while which leaves the other to shine brighter than ever. The first half of the book is quite relaxed but the second half turns absolutely mental with reality twisting around on a sixpence and Rayner having great fun with Rose’s slips of the tongue (oo-er!). People who bemoan that the New Series Adventures are lacking should fuck off and go and read a stodgy, perverted New Adventure – Doctor Who novels have rarely been this fun before and enjoyable as this: 8/10
Posted by Doc Oho at 10:20