To The Slaughter by Stephen Cole 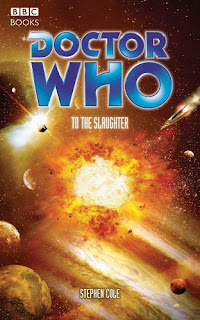 Plot: Shock horror! Celebrity decoriste Aristotle Halcyon is planning a spring clean of the solar system, demolishing scores of Jupiter’s moons in order to bring them down to an even twelve. But with eco terrorists plotting devious schemes, secret weapons being developed and millions of innocents set to the slaughter it isn’t going to be as simple as he feared…

Top Doc: What a forgettable fellow! Coming from Stephen Cole, the guy who knows how bland the eighth Doctor can be (hell he guided him through three years of total blandness!) and has delivered two excellent previous interpretations (Vanishing Point’s Doctor was merciless and Timeless’ was shockingly violent and funny). All out the window. This is the generic Doctor through and through, he reacts to the plot appropriately, tells a few gags, defeats the baddies…but there is little here to distinguish him from any of the others. It doesn’t help coming after The Deadstone Memorial which featured some definitive eighth Doctor characterisation. With some people it is football fixtures, with the Doctor it is moons. He is gallant, always trying to protect Trix (much to her chargin!). The first chapter sees him using an executive in a chair as a weapon! He cannot resist a mystery, although they are supposed to be getting the TARDIS back he gets embroiled into investigations into Falsh’s secret project. In an almost homoerotic moment the Doctor is reunited with Fitz and intimately kisses him on the hand. Brilliantly, it is the Doctor who sets of the charges for the demolition of the moons, causing a wave of devastation that snaps all the blood-crazed zombies out of their homicidal stupor.

Scruffy Git: Fitz too seems to be less than the sum of his parts, more an amalgamation of his most well known traits than an honest portrayal of everyone’s favourite space bum. We do discover he has a special link to the TARDIS since he was reconfigured in Interference, when he was remembered some bits were made up and some bits were improved. He falls for another bird, this time it is the astonishingly bland Sook, the innocent victim of society and perfect sob story material to drag old Kreiner down. What’s that…failed romance number fourteen? Sheesh give it a rest man! He is described as culturally illiterate and ignorant of everything. A mystery charmer? His relationship with Trix is interesting, as he admits he would never leave the TARDIS without her. Its nice to see his experiences with the Doctor helping him out and he uses designs from Parallel 59, The Fall of Yquatine and Sometime Never… to aid in his pretense as an art student!

Identity Tricks: Trix is given the best material here simply because we don’t know her all that well so seeing her lurch from one crisis to another is a joy. She has a famously low borderm threshold, petite and becoming. Even adrift in space, Trix has standards. She is described as being hard, devious, and manipulative and always trying it on…but at least you know where you are with her. Sweetly when she is reunited with Fitz she throws her arms around him and tells him she can rely on him whilst stepping on Falsh! She suggests that Fitz couldn’t live without her. She gets all the best lines, getting all bitchy with Tinya, pointing out the absurdities in the plot (“It’s a Trojan Slug!”) and actually has great chemistry with the Doctor. Astonishingly enough all her flitting around the universe she only felt she was in outer space when confronted with stunning vista of the Milky Way.

Foreboding: The intimacy between Fitz and Trix is about to blossom… 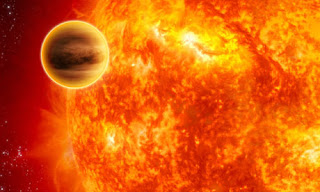 Twists: The opening thirty pages read like a Benny Hill sketch on acid (you can even hear the comic music!). It’s a load of running about, people being knocked unconscious with soup ladles, people hiding under desks misleading those in the meeting to think they are being felt up and Trix flirting outrageously with people to escape (to the pointing of offering herself as an all you can eat buffet!). There are loads of atmospheric descriptions of planetscapes which genuinely take your breath away (The glowing eyes of planets and moons stared in from the golden glass). Falsh’s attempts to destroy his weapons facility goes horribly wrong when the facility launches in space…the Doctor and Trix discover it and the piles of sickening corpses. The eco terrorists strike on the eve of the grand demolition…by suggesting a new life form exists on one of the moons…a space slug! Halcyonite, as the Doctor discovers, leaves you in a hypnotic state and open to suggestion. Fitz’s latest squeeze steals the TARDIS key and plans to duplicate and market the time machine…as the Endless Cupboard! Torvin turns out to be the evil scientist…Klimt! The revelation that Sook turned her parents over is quite a shock as is the fact that she is being manipulated because this information by Gaws and Mildred. I loved the stampede…the crowd of slavering, homicidal animals storming towards our heroes and ripping through the crowd! The slugs turn out to be the ultimate weapon…indestructible and inducing violence in all. Fitz’s murderous personality once under the influence of the slug is really nasty and has various bloody fights. It would appear we have a Kroton and a Sontaran at the alien auction but it is never specified. The last scene of the Doctor, Trix and Fitz hugging on the TARDIS, is lovely.

Embarrassing bits: Where do I start? Psychedelic paint that hypnotises people. Indestructible space slugs that turn people into homicidal maniacs. The blatant drug using. The fact that Fitz just happens to stumble across the rebels. The chiggocks! None of these ideas is especially embarrassing as such…just totally and utterly odd. Its like Cole doesn’t want you to like the book. This is a book that wants you to enjoy its fluffy atmosphere of escape/capture/flirt/threaten/steal and then accept a vicious bloody massacre with a hideous death count. The jokes are fine but match with the violence and things get…uncomfortable.

Funny bits: Pick a page. The books best asset is its humorous tone. The future’s bright. The future’s class C. The mental Chiggock attacking Trix. Fitz being killed by a glowing wall! The Doctor and Trix stepping in front of each other as neither of them wants to appear a coward in the face of the fish faced monster.

Result: Gah! Get rid of that editor! Whilst To The Slaughter is okay, it should NOT be the penultimate eighth Doctor adventure! Its about nothing in particular, contains nothing that indicates the series is winding down and subsequently becomes one of the most forgettable, inconsequential books in the entire range. It uncomfortably tries to mix violence and humour (which can work if the writer is clever enough) with a cast of nobodies (the background of most of the guest cast is all cliché). The regulars aren’t terrible especially Trix who is great fun in her scenes and their growing intimacy is lovely to witness. What saves the book is Cole’s bubbly prose which is effortlessly readable and fun and his eye for catchy dialogue. All in all though, after such a good run of books this is the only below average EDA since The Domino Effect and with its whacky ideas and pointlessness it belongs way back in Cole’s editorship. Oh the irony!: 4/10
Posted by Doc Oho at 17:04