Plot: The Doctor, Vicki, Ian and Barbara land in Byzantium, they get separated and then meet up again. That’s about it really. But with this book it’s the details that matter.

Hmmm: The Doctor is cautious about visiting the Roman Empire, he and Susan visited before and found it to be a brutal and barbarous place. Although Christianity itself is conceptually alien to the Doctor, he had always found in his studies of the basic principles of the religion, a lot of ideological trappings that he considered to be worthy of considerable investigation, particularly its similarities to Greek philosophy. He wonders how many times he has blundered in to history’s minefield of brutalities. In the 60 years since he had abandoned his home and fled in terror, the Doctor had faced death on numerous occasions. The thought of being trapped in Byzantium with no TARDIS numbs him with terror. He itched to travel to far and distant worlds and increase his knowledge of the universe. He collaborated with Shakespeare on Hamlet. The death of Hebron affects him greatly. When they are re-united, the Doctor admits if they are marooned in this time forever he is pleased they are together.

Schoolteachers in arms: Ian is totally off throughout much of the book, reading like a cockney well ‘ard lad than the humble and intelligent schoolteacher we know and love. Some of the dialogue Ian is given would sound ridiculous being spoken by William Russell (see embarrassing bits) and the thought of Ian being pursued by the salacious women of the time bizarrely seems much more unbelievable than Barbara (who was lusted after by Nero in The Romans). Barbara is much better but doesn’t get to contribute much to the book. Seeing Byzantium through her eyes is vital because she has all manner of interesting facts and figures at her fingertips.

Ian and Barbara first met at a teashop on Tottenham Court Road. Barbara spends a portion of every day wondering if they will ever get home. It was all the fault of ‘spotty’ Hubert that Barbara first (and it this point only) got drunk (although she gets sizzled on wine in The Romans). She has changed in the years she had been travelling with the Doctor. She has grown more assertive, more willing to face whatever life had to offer head on and confronts its delicious ironies and capricious dangers. Ian finds Christian view narrow and inflexible, he’s a rationalist and a humanist and doesn’t feel divinity exists in a ordered, scientific world. Barbara realises how cheap life is in Byzantium, discovering the one rule that is important…obey all the rules or die. At school Barbara wanted to bring history alive in the hearts and minds of those she taught, history that made people want to go and make history themselves.

Historical Prophet: Despite a few moments of overdone dialogue (come on, this is a Keith Topping novel!), I thought the treatment of Vicki was pretty good. It is good that so soon in to her adventures she gets a taste of the threats that are ahead…

Vicki used to live in New London, Liddel Town, on the South Circular Road. Her mother was going to call her Tanni. She used to look up at the stars and thin they held the future. When she thinks of the Doctor, Ian and Barbara dead, Vicki feels utterly hollow but she is used to being alone. Her predicament at being stuck in Byzantium is what truly upsets her. She is 14 going on 108 and is used to losing those close to her. In the spirit of the Hartnell historicals proving that humans can be just as terrifying as aliens Vicki witnesses a crucifixion and is horrified. She is still a child despite thinking she has had childhood stolen from her by tragedy and circumstance. She is still blessed with the youth and freedom of childhood.

Twists: The first chapter is certainly memorable; Samuel is crucified, red hot metal hammered through sinew and bone and when the guards present are bored of his screams he is speared through the ribs and has his guts spilt. Chapter two sees politics and sex enter the game, this is a book that opens well! Chapter six is excellent, Maximus and Caliphilus talk of Jesus and Christianity with hilarious disdain, as though this is the latest gossip (which of course it was!). In a struggle in the marketplace, Ian kills a man. In a sick moment Simeon’s house is raided and his wife’s throat is slit. In one scene of delicious sleaze Edius sleeps with a slave who cries rape and he is arrested and she is rewarded for putting an enemy of Caliphilus in jail! Chapter 26 doesn’t have a whiff of the regulars and is still gripping, proving that Topping has researched his entertaining period enough for the book to survive and prosper without them. Thalius offers Antonia a chance to commit suicide rather than face punishment for treason and she slits her wrists in the bath. Ian stabs Yewhe with his Roman gladius to save Barbara and Vicki. The book ends with a slaughter with all the conspirators stabbed to death. 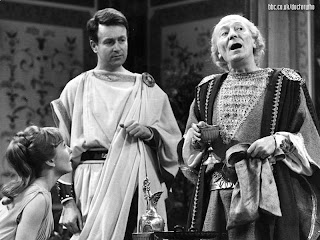 Embarrassing Bits: It’s just the dialogue mostly. Lets see:
Vicki: “That’s like, pure dead easy for you to say!”
Ian: “Do you mind awfully if I get up? It pen and inks a bit down here!”
Ian: “Stop it, you big bully!”
Ian: “Why don’t you try asking me you very rude man?”
Ian: “If you’re talking geography darlin’”
Ian: “Well not with me sweetheart!” and “I’m sure you can darlin’”
Ian: “I’ll give the pair of you a ruddy good biff on the conk!”
Barbara: “I will not be used as an excuse for either of you to shatter the harmony of this home. If it aint broke, don’t fix it. A blessing upon all of those who dwell in this house!”
Ian gets something of a culture shock when he is seduced by a teenager who wants to pin him to the bed with her shapely thighs and make wild and passionate love with him until he begged for more!

Funny Bits:
The Doctor: “I don’t know why I continually allow you to persuade me to blunder into such hair brained adventures!”
“The delicious and flirtatious Felicia who can produce a momentary awakening even in these tired and bent old bones.”
The Doctor on the translation of the Gospel of Mark: “Your version is as dry as stale bread! Dear, dear, dear, I can see I’m going to have to go back through all of the work you’ve already done and double check it!” 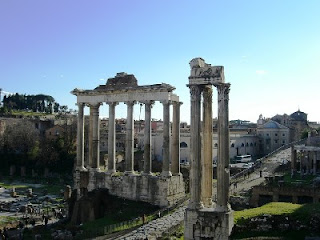 Result: Plotless but far from pointless, this is far better than its reputation will have you believe. Keith Topping’s previous novel The King of Terror was also melodramatic and theatrical in tone but that is perfect for the political wrangling and bloodthirsty action of a Roman historical. It is true that the characterisation of the regulars is slightly off and that they hardly make an impression on events but for once that is not an issue. This is a fascinating stroll through Roman society, uncensored. Rather than bothering with a plot Topping continues to explore his world and I came away with far more knowledge at the conclusion than I would have hoped for. Religion, sex, politics and violence blend together to made a racy and intelligent read and for a good example of how well researched and crisply written this is, go and read chapter 23. I would say as a Doctor Who book this is a failure but as a snapshot in to the past it is exemplary: 7/10
Posted by Doc Oho at 05:35