Plot: The Doctor and Benny visit the planet Betrushia in the grip of a war whilst Ace convalesces on the nearby planet Massatoris. The Chapter of St Anthony are a grip of religious zealots and they are on course of Betrushia where they turn a bad situation even more ugly…

Master Manipulator: The Doctor feels more confident and happy than he had in an age. He has spent the last few weeks tidying up loose ends has had spent his lives ignoring (probably setting up a ton of adventures still to come!). It is lovely to see the very Troughtonesque description of the Doctor splashing about in the seas, a smile on his pixie like features. It was one of his pet hobbyhorses to berate architects and town planners for their lack of verve.

Boozy Babe: Bernice is a 25th Century adventurer of dubious scientific repute. Being wholly honest did not come naturally to her. Ace is starting to think that Bernice talks more and more sense. It is a good and bad showing for Bernice’s conscience – she strikes up a nice friendship with Liso, who initially cannot stand her but is soon melted by her charms and resourcefulness. Bernice goes from being hanged out of a window miles in the air to agreeing to go on a suicide mission with him. However, St Anthony’s Fire also features one of the stupidest mistakes Benny has ever made, helping to destroying the St Anthony mothership and condemning innocents to a terrible death. For somebody who criticises the Doctor’s callous ways this is the ultimate hypocrisy.

Oh Wicked: Mark Gatiss gets Ace, I’m certain of that. Even New Ace who has eluded some of the finest Doctor Who writers. You can see the seeds being sown for Ace’s departure (yay!) here; she is getting restless just travelling and needs a break from it. Once she returns to the fold she wonders if it was a greater yearning that made her have a breather. Ace’s body armour was once a second skin but she has been wearing it less and less lately. The bright but somewhat disturbed teenager has given way to a mature and unreadable adult. She needs a break, a chance to do her own thing. Where a blaster would have felt like an extension of her arm, it now felt clammy and cold like a stranger in her hands. Was she changing? Was it the trauma of her conditioning or something more profound? The something, perhaps, which had led her to seek refuge from the TARDIS in the first place. Twists: Pages 84-86 are horrific. You’ve got to love how Liso calls Bernice’s bluff and hangs her outside the airship! Page 98 describes the destruction of Porsim majestically. Priss’ death on pages 110-113 are disturbingly captured. The dirigibles plummeting towards the inferno is a terrific image. The Black ship of Keth tears through the dirigibles as though they were curtains. The religious ceremony Ace witnesses sees people being burnt to death for their sins. The faiths of the Earth merged to create planet wide peace and it was a disaster. No one could agree and the Chapter of St Anthony stepped into the breach to impose discipline. They travel through the wastes of the galaxy in search of those not yet blessed and they test their faith by destroying them. Magna Yong has devised a method of focussing the suns power into a colossal weapon. An organism created by the original Betrushians was invented as an evolutionary catalyst that would assess various life forms fitness for survival. If it didn’t come up to scratch the regulator was designed to annihilate it. Unfortunately it found all life unsuitable – so the Betrushians created the satellites which kept the organism dormant for millions of years. The satellites became encrusted with dust and became the rings of Betrushia. Once the Chapter of St Anthony came blasting through the rings the imposing mechanism began to fail. A chain reaction that has brought the organism back to life. That instability threatens to destroy Betrushia. Yong thinks the creature is St Anthony.

Embarrassing Bits: Are we honestly not supposed to realise that the unnamed woman suffering the religious torture is Ace? She is introduced mere pages after Ace left the book and if it was anybody but Ace, why is she unnamed? There is a chance here to deal with genocide and warfare…meaty issues but Gatiss chooses instead to have the commanders of both sides snarl insults rather than work their problems out. The war is represented in a handful of locations and characters, you never get a sense of its scale or its importance…come on Mr Gatiss, this isn’t a TV script! The Chapter of St Anthony is a potentially terrifying idea its is portrayed here with no subtlety or depth and as such fails to convince on any level. The biggest issues are the two villains, Magna Yong and De Hooch. Yong is so evil he spends one scene torturing an ickle wickle kitten! The fiend! He also has some of the most ridiculous dialogue: “No, no let them (the Doctor and friends) run loose, it amuses me to have some competition” and “I’m allowing you to live because, quite frankly, I’m bored. It’s been so easy for so long. I’d like to see how far you get at thwarting me before my inevitable victory!” Silly sod. De Hooch is even worse, a hideous midget (so naturally he’s evil) who admits: “I should have overthrown you years ago!” Page 223 sees them at their all time more ridiculous: “You. You, De Hooch? Don’t be ridic 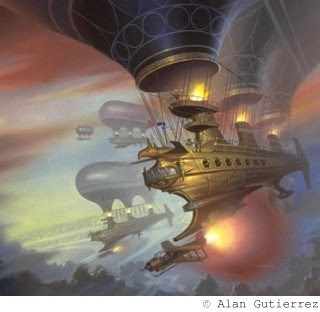 ulous. I only promoted you through some misguided sense of pity. Magna? You? You ridiculous little freak! I am Magna1 I! I! For all time!” They spend much of the book torturing and maiming people in the name of religious supplication (Yong even feasts on children’s limbs!) before their bizarre power struggle leads them to kill each other (Yong has his shoulder blown off and is blinded and De Hooch has his head cracked open like an egg). I’m not sure what Gatiss was going for here but frankly they were the most fun part of the entire book!

Result: A book with a justifiably bad reputation but still quite fun if you are in the right mood because Mark Gatiss’ prose is a joy and individual scenes in this book have the potential to take your breath away. However there are still a stack of problems; the twin plots of Betrushia and St Anthony exist independent of each other for the majority of the book and never meet successfully, the book is riddled with unanswered questions (Why did the war start? Why did the original Betrushians create such a nonsensical entity?) and the ending replaces ingenuity with technobabble. Characterisation is sketchy at best, with Yong and De Hooch emerging as the most preposterous villains of the entire range. I think this might of started out as a book that wanted to say profound things about trying to play God (which both the Chapter and the original inhabitants of Betrushia tried and failed) but considering every religious character is either evil or just plain stupid it jettisoned these good intentions and just went for the amusing pot-boiler approach. A bit rubbish really but more fun than the last two: 5/10
Posted by Doc Oho at 06:33