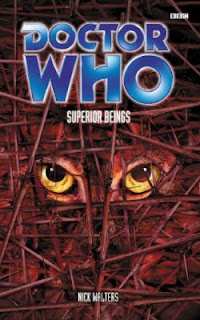 Plot: When Peri is kidnapped by a race of vicious hunters and locked in cold storage, the Doctor is on the hunt to find and save her. In doing so, they are marooned on a beautiful garden planet with a deadly secret…

Fair Fellow: Gosh almighty this is the first time I have read a PDA with decent characterisation for the fifth Doctor. He is involved in the action! He has an opinion! And he sounds exactly like Peter Davison in the part. I’d call that a minor miracle… The most interesting facet of his personality brought up is his burgeoning possible sexuality, which unfortunately is ignored in favour of the plot but opens up several intriguing possibilities for future stories.

He’s a charming guy and so easy to get along with. He had no idea how to treat an American girl in her late teens but his attempts are sweet. Interestingly he puts a protective arm around Peri but the rest of his body leans away from her. He can show her all of time and space but he can’t give Peri what a human being really wants. Especially one at her age. The Doctor is homely and innocent on the outside but isn’t quite what he seems…sometimes attentive and helpful and almost painfully considerate but when preoccupied he seems to relish making people nervous. He had never got on with soldiers. With his blond hair, youthful looks and bizarre outfit he looked like the ultimate draft-dodging beatnik. He generates an easygoing atmosphere of friendliness that wasn’t intimate and therefore non-threatening. The perfect plutonic relationship, perhaps the Doctor needed to live through Peri’s experiences. Did Time Lords know anything of love? With the Doctor around miracles happened, last chances popped out of the blue. Without him Peri was as good as dead. He prattles on like a battle veteran, especially when in danger. His sudden switch in moods seemed to suggest a deranged mind. Kikker figures the Doctor must be suffering from some kind of mental condition that prevents him from feeling fear. 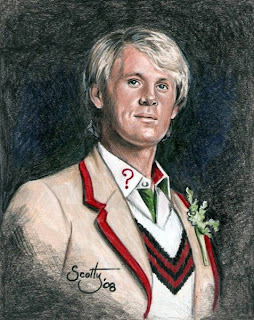 Busty Babe: Peri has actually been quite sparsely used in the PDAs, an obvious choice to team up with the sixth Doctor but only being three times before this and held in favour of Mel, Frobisher and the Brigadier. Again to Nick Walters credit this is one the better interpretations of Peri I have read, not least because she actually reads like an American. Its not just the terminology that marks her as foreign, its her thoughts of her childhood, her cheery attitude and name dropping of several US locations. It all adds up quite successfully. It also helps that this is quite early in Peri’s time and she is finding her feet with this dishy Doctor that has whisked her away from her Earthly troubles. Grouchy Peri doesn’t exist yet, this is a bright eyed and bushy tailed young lady who wants to see want the universe has.

Travelling with the Doctor was forcing Peri to re-think almost everything she had come to accept as the norm back on Earth. Peri was terrified of hurricanes as a kid; she hid in the basement of her uncle’s farm as a typhoon scoured the landscape. Peri doesn’t believe in heaven and hell as actually places, only as metaphors. Being on the Doctor’s side was doing the ultimate good; just hanging out with him seemed to have some positive effect on the universe. Peri is a quick thinker, when attacked by the Valethske and the Garden in turn attacks them, Peri retrieves a gun and shoots the plants, trying to appeal to the single mindedness of the hunters united against a common foe. She knew the dream of cold sleep for a hundred years would haunt her nightmares for years. She weeps for the Garden planet as the Valethske bombard it with 100 missiles.

Twists: It’s a deceptively simple but eye catching and memorable cover. The Valethske are superb creations, terrifying as they advance en masse, tongues lapping, tails swishing…feasting on human flesh. They raid a planet, stock their larders with the inhabitants and sleep in suspended animation until they reach the next planet in their Great Mission. There is some excellent, atmospheric prose when the Doctor and Alien explore the waking alien ship, like being inside a living creature. 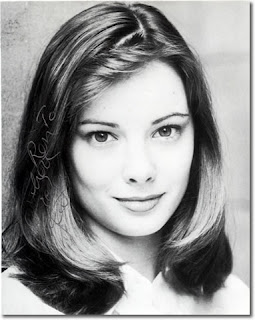 They rescue Peri, escape in the pods but leave the TARDIS behind… Chapter Eight is superb, Veek waking up ravenous and slaughtering Seryn, slashing open her stomach and cooking her organs, then finding Flayoun and mating with him in the blood. With a time machine the Valethske could proliferate throughout the universe. When Peri picks some fruit from the Garden planet, the razor limbs Gardeners attack and the military turn them into sticky mulch, to the Doctor’s disgust. The Tree is an unusual idea, a cathedral sized space with phosphorescent moss lining the walls – Aline believes her previous ‘Encounter’ was inflicted on her to lead her to this planet and she is engulfed in alien mucus! In a moment of skull exploding horror, Lorney’s head is blown open! Using Peri and Athon, the Valethske want to set up a breeding programme so when they sleep between stops their prey will grow in numbers! The Gardeners evolve into hissing, crackling creatures of death…Melrose is slaughtered as they wrap their thorned tentacles around him. As Veek is so well written her alliance with the Doctor is made to feel like a BIG moment. The Great Mission is the search for the Valethske Gods, the Khorlthlocloi, who once decided their children were becoming too dominant so they smashed their war fleet and introduced a plague that all but wiped them out. Turns out the Khorlthlocloi began to evolve beyond the physical plane in to the mental…but they needed to keep their physical forms alive in case they wanted to return to them. They created the plants to feed and tend to them and their bodies, over many centuries, devolved into the giant insects. A threat in the universe of thought forced them to flee to their bodies but they were rejected, their autonomic systems had changed so much. Trapped between the material universe and that of the mind they were killed by the thing they were trying to escape. Veek and Flayoun fight to the death in an extremely bloody set piece. Aline sacrifices herself to kill the Valethske, releasing a devastating pulse of energy through the underground tunnels. The Garden planet the Doctor and Peri leave is an expanse of grey ash, an extremely poignant ending.

Embarrassing bits: After the deadly atmosphere on the Valethske ship, the scenes on the planet are such a jarring change of pace you could be mistaken for reading a different book! 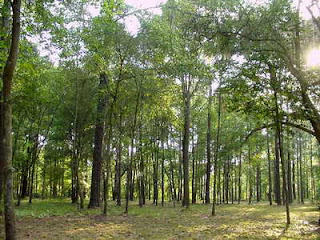 Result: A book that is not as good as the sum of its parts. All the ingredients are there: the fifth Doctor and Peri are given their best characterisation to date, the Valethske are an extremely effective and chilling enemy, the Garden planet is intriguing and mysterious and the prose is full of moments that made me nod my head in appreciation. The pace does effect proceedings considerably, slow, fast, slow, fast, slow…and if im honest the book does promise more answers than it delivers. However the action sequences are superb and the characterisation subverts the norm, the guest cast is given a journey to take (especially Veek and Aline although you could say the same for Peri), which makes this a novel worth finishing. Nice bleak ending too: 7/10
Posted by Doc Oho at 06:38