Plot: It’s Cartmel so the plot doesn’t really kick in until the conclusion but the first 250 feature a kid going to school, Roz fighting a bunch of dogs in London, the Doctor and Benny hanging around in Kent and Creed having a fling. Gripping stuff…

Master Manipulator: Cartmel does not want to write Doctor Who books. He wants to write about his own characters but unfortunately the only place that will publish is a Doctor Who range so he has to give the Doctor and his companions little cameos. Rarely has the Doctor’s role in a book been reduced to such a joke. He literally hangs out in house in Kent with Benny unthawing a character from a previous book. He exhibits little personality, does not connect with the action and lacks any presence at all. He’s just sort…there. Unthinkable.

Stroppy Copper: Interestingly, Cartmel’s agenda is all the more obvious with Roz who does get quite a bit of page space. However she is a hollow, vacuous rendition of a terrific character, practically unrecognisable as the sensitive but ballsy copper from the future we are used to. Was Warchild written with Ace in mind? Because Roz here reads like New Ace in all the worst ways. She runs around deserted London with a gun, gunning down dogs. Her sections are the most boring of the entire book, tedious action sequences with no tension and no reason to invest any interest in the characters fighting. What is interesting is how much character Cartmel invests in his own creations, Creed, Justine, Vincent, Ricky…they are all three dimensional characters in their own right and yet Roz who gets more time to breathe in this book than some of these characters makes no impact at all. Lance Parkin worked magic with her character in the last book but I do not recognise this woman as the heartbroken Xhosa copper who left war torn London. 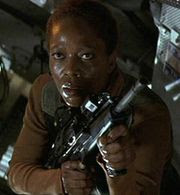 Puppy Dog Eyes: Are you having a laugh with me? Quite aside from the fact that Chris only shows up in three scenes in 300 pages, when he does he is unrecognisable. Hair shaven, robed up, spouting Buddhist philosophy, Chris gets quite an interesting monologue about the alpha male. With one problem, it doesn’t sound anything like him and I refuse to believe the ridiculously naïve blond we have been lumbered could suddenly become this intelligent. All four regulars are fudged. Not a good start.

Twists: Creed now has three children by Justine who he departed Warlock with but their marriage has hit a rocky period. London is in a state of emergency and Roz is press ganged into service. At first it seems that the Doctor is growing somebody in his study like Dr Frankenstein. Jessica comes home and finds Roy mauled to death by the dog. Ricky finding out Creed isn’t his father made me catch a breath. Justine hurt because she was told Creed was seen with Amy so she told her son that he wasn’t her father – which drives Creed into Amy’s arms…this stuff reads really well. Creed’s observation that Amy’s body feels so different to his wives could explain so many affairs in a simple sentence. Ricky irritates, like an itch – kids become aware of him which turns into hostility. He can project his emotions. Amy turning up as the school counsellor raised and eyebrow. Pangbourne’s meeting with Francis Leemark is terrifyingly good, their religious debate got my blood boiling and the violence that erupts is raw and brutal. The Doctor is thawing out Jack and trying to return his mind to his body. Jack has inhabited the mind of the White King for two years and has turned to dogs aggressive to get the Doctor’s attention. He has been trying to warn him about Vincent – who is still mad as hell for Justine leaving him for Creed. Ricky is a potential weapon and Vincent has been studying him for years. He wants the pair of them to take over America. Amy shoots him dead and moves in with Creed.

Funny Bits: Roz and Bernice…lesbians or spies? Brilliantly Benny calls for champagne as her plane plummets to the ground.

Embarrassing Bits: The regulars. Where are they? 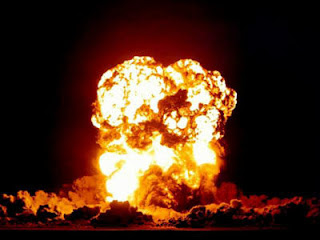 Vincent’s plan to get Leemark to the school to attempt to murder Chris so Ricky will react is ridiculously long winded.
The London sequences are just dull, dull, dull. I can’t think of a more snoozable way to write a state of emergency with slobbering, vicious dogs attacking in a giant pack.

Result: I am so torn by Warchild because I really liked all the Creed/Vincent/Justine stuff, domestic drama that bounces from the page with Cartmel’s trademark touches of human honesty. The book finishes off this trilogy of books with some lovely character twists and the last fifty pages fly by, using the first two books as building blocks to make the climax a powerful one. However the preceding 250 pages are mostly dull, with long stretches of nothing happening (another Cartmel trademark) and the barest amount of plot holding the novel together. Maybe because he is writing for adolescents but Cartmel’s prose is decidedly juveline in places and when the book strays from his core characters I lost interest. Again this isn’t a Doctor Who book, it might as well be called the ‘Creed Adventures’ for all the impact the Doctor makes over the 1000 odd pages of Warhead, Warlock and Warchild. I cannot believe the contempt the author treats the regulars with, especially Roz who only appeared in a limited number of books. A hugely flawed trilogy, touches of brilliance in a series of books that unproductively attempts to stretch the Doctor Who format to its limit and bleed in all manner of adult themes and imagery of which this an uneven conclusion. Patience stretching but ultimately worth reading: 5/10
Posted by Doc Oho at 12:13