Dying in the Sun by Jon De Burgh Miller 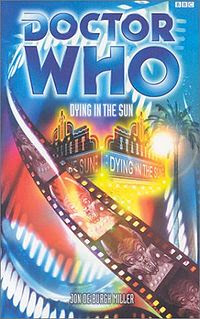 Dying in the Sun by Jon De Burgh Miller

Plot: The Doctor is heading to Hollywood! The latest blockbuster Dying in the Sun is thrilling the preview audiences with its emotional storytelling and audacious special effects. The Doctor is the only person who seems to think there is something fishy going on…

Oh my Giddy Aunt: It’s a brave attempt to plant the 2nd Doctor in an environment that doesn’t really suit him and to his credit for stretches of Dying in the Sun, De Burgh Miller’s Doctor sounds authentic. What people need to remember is that this is set between Power of the Daleks and The Highlanders and Troughton was hardly the mischievous little pixie he would later become. No at this point he was uncertain, slightly callous and very energetic. That’s all here. There was no moment when I thought ‘ugh, that aint Troughton!’

He doesn’t care if he is being pinned for murder, he acts with all innocence. He had a vulnerability to his confident exterior. He is clearly a guy with eccentric tastes in clothes rather than a dirty tramp. There is weariness in his face and compassion in his eyes. The Doctor prefers to stick to books for entertainment, they are much more him. He thinks it’s always sad when guns are involved. When the Doctor asks somebody in authority a favour it is like a kid asking his parents. He hasn’t been to America for some time and originally met Harold in England in the 1920’s. 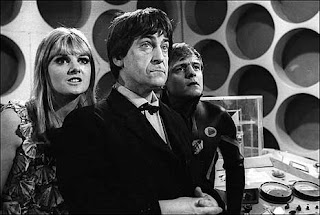 Able Seaman: In Ben’s time as a merchant seaman he had already seen much of the world but when he left that behind to travel with the Doctor it all took on a new meaning. It was like looking at the world for the first time.

Lovely Lashes: Polly had always wondered what it would be like to be famous. The fans, the lights, the money…she had always secretly dreamt of something like that happening to her. The prospect of auditioning for a film was ridiculous but strangely compelling. Polly is conflicted after she is hypnotised, she cannot believe that she has killed a man but she is not sorry that he is dead.

Twists: During a shootout in a restaurant, a film star is shot and sun blazes from his wounds. Chapter Four suits the story beautifully, the worst day of Robert Chate’s life comes when he shoots his gangland boss in the neck, wraps him in a bin bag and drags him back to his apartment, knocking out two coppers on the way and blowing up his house…so the police think he has committed suicide. The special effects for Dying in the Sun are far too good for the time. Polly almost shoots the Doctor but turns the gun on hot superstar Caleb instead. Pages 113-114 features a great bitch fight between the Doctor and Wallis. The idea of a film reel tainted with alien creatures that can affect your sensations and sights (therefore making one hell of a convincing movie) is very imaginative. The creatures contacted De Sande in Alaska and can inhabit the chemicals of the movie film. The reception scenes are great – with the mindless sheep of Los Angeles happily guzzling down aliens in liquid form! The Doctor’s solution to De Sande’s madness is also ingenious, well in keeping with the theme of the piece; projecting all kinds of horrific monsters onto the departing plane and causing it crash. 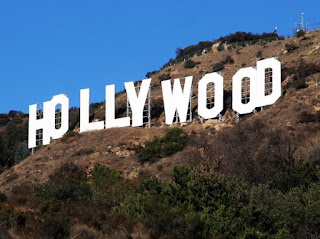 The aliens disperse over Los Angeles in the crash, which supposedly explains why they are so damned excitable!

Result: Surprisingly merciful considering my reaction to the first thirty odd pages. First I must confess books set in America rarely interest me and second that Hollywood glitz and glamour doesn’t impress me in the slightest. Not a good start. Add to that a reasonable but not exceptional attempt to capture the regulars; some good but not great prose and a plot that only requires half the length of the book. However, it is full of imagination and some clever ideas and the odd moment, which really works (I loved the Doctor’s button pushing throughout). I am not going to condemn this to the bottom of the PDA polls, which is where it usually ends up because it is average rather than appalling (are there have been a fair few of those lately!). Dying in the Sun has great intentions, it meets some of them but I feel there is far more potential than is actually realised: 5/10
Posted by Doc Oho at 11:43