Plot: Those dastardly Players are back and this time they are fiddling about with the lives of Napoleon, Wellington and Nelson to ensure a devastating future for the planet Earth and a game that will play on until the entire human race is plunged into war.

Oh My Giddy Aunt: The characterisation of Troughton’s Doctor is as good as you would expect from the script editor of his last season and the co-writer of his last story. What Dicks achieves here is nothing short of a miracle; he is no longer a renegade, not yet and exile, the Doctor is an unwitting agent of the CIA on Gallifrey You have got to admire the gall of the man, literally having his own cake and eating it, weaving together his own continuity from The War Games and his and Robert Holmes’ blatant disregard for it in The Five Doctors and The Two Doctors. Here he manages to open out a whole new series of adventures for the second Doctor, one where he has no ties, a functioning Type 97 TARDIS and is kept on a leash by the Time Lords. Frankly the possibilities are endless and whilst he has the Doctor head off to Space Station Camera to visit Dastari at the end of World Game it is a real shame the Past Doctor Adventures ended when they did because I could imagine a few more stories of this ilk chronically his post Trial, pre exile escapades!

He never stole the TARDIS, he just borrowed it. The Doctor is a person of great intelligence, courage and ability with a soft and gentle face. The Doctor blames the eighth incarnation for convincing him to contact the Time Lords that leads to his capture (The Eight Doctors). One of his motives for leaving Gallifrey was to escape the endless intrigue, back stabbing and double crossing. Serena is from one of the oldest and most respected family’s on Gallifrey and he objects to her presence on his mission. Cheekily he plans to steal the TARDIS and strand Serena at the first opportunity, figuring that a contract made under sentence of death cannot be morally binding. Brilliantly he is described as shooting into a room as if fired from a canon! He prefers his perpetual TARDIS without the functioning chameleon circuit as it would extremely embarrassing to lose your ship because you have forgotten what it looks like! He finds humans fascinating because you can never tell what they are capable of. I love it when he guzzles down champagne because he has never been on an expense account before! He treats Serena to shopping and dining and she is worried by his incorrigible frivolity! The Doctor is reckless and insanely brave and in this novel he manages add saving Wellington, Napoleon and Nelson to his CV. A mysterious wizard with dark knowledge at his fingertips? The Doctor is often tempted to use his fore knowledge of the future to save lives. There are scenes between the Doctor and Napoleon that I would have loved to have seen on screen where they circle each other like a pair of wary dogs. It is lovely hoe he comes to value Serena’s companionship as they dine and share tales of their pasts. He adores tinkering with the submarine. I love how he is written very much in the post War Games mould, this is a Doctor who has got nothing to lose any more so he leaps forward to a month after Waterloo to see if they succeed in stopping the Countess and even more frivolously he takes Tallyrand well into to the future to show him what will become of the Earth if they do not stop her. The Doctor’s furious anger at Serena’s death matches the readers own and the way he handles his grief, sitting on a stone bench throughout the night as the city prepares for war around him, is very moving. I adored the moment when with surprising and worrying ease the Doctor crushes his conscience and doesn’t step forward to help Serena’s killer. His suicidal plan to impersonate Napoleon on the battlefield and confuse the French troops is priceless! He ponders as to why he can never truly hate who he is supposed to or like those he should look up to. I love his wily ways, bargaining with the CIA to ensure a formal tribute is made for Serena, her death publicly acknowledged and memorialised and her name added to the Gallifreyan Roll of Honour. Just go back and read this paragraph again, that is some fine characterisation. Where has this Terrance Dicks been hiding since Players?

Foreboding: The Doctor asks for his TARDIS back and seeks out his own companion, Jamie, and asks for him to have his memory altered so he thinks they have left Victoria studying graphology which leads very nicely into The Two Doctors. A Time Ring is mentioned but he wouldn’t get to use one until Genesis of the Daleks. World Game is blissfully confident with how it handles its continuity and throws in a Raston Warrior Robot (The Five Doctors), mentions of the Eighth Doctor (The Eight Doctors), the Players (who the sixth and Eighth Doctor’s would come up against in Players and Endgame) and he even finds time to introduce the Doctor’s psychic paper for the very first time (2005 NuWho). Oh and the Doctor keeps his Napoleon ensemble…which he puts on again in Time and the Rani! He cuts and splices all this continuity together in a way only somebody who is intimately involved in the series could do and by shamelessly making his points and not labouring them. 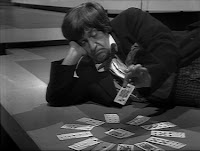 Twists: That is a truly memorable wrap around cover – Troughton dressed up like Napoleon – finally a good use of photoshop! An Oubliette is a superior Time Lord cell for important prisoners. Temporal dissolution is to never have existed at all. I loved the description of the Revolution devouring its children, many a head rolling due to fake charges. The Countess attempts to assassinate Wellington and Nelson during the one time that they met and thus altering the events of Trafalgar and Waterloo. She then attempts to build a submarine and offer it to Napoleon to sink the British fleet. I loved the scenes with the Raston Warrior Robot – it fires so many javelins into a barrel it looks like a hedgehog, fires one straight through a soldiers heart and extends its arm into a blade, Terminator 2 style, and decapitates a character! The Doctor manages to blow it up from one of the submarine torpedoes but being indestructible as it is it simply reforms like quicksilver. We get to visit a world where the Countess has one, it is an apocalyptic ruin with the whole world firing rockets at each other. The Grand Design is to mastermind the Earth into a chess game of war with the countries as the different species. That’s pretty obscene actually. He killed Serena…I cannot believe that Dicks had the courage to kill off a character that we were starting to grow fond off! Anybody who is used to his sugary nostalgia trip novels will be aware that this is not the sort of underhanded shock that he deploys and this subversion of his usual storytelling provides the best shock in one of his novels for many a year. The Historical Notes are a lovely, thoughtful touch, a coda that allows us to see these historical figures to their deaths.

Funny Bits: Serena snootily tells the Doctor that she will be his supervisor. You can imagine his reaction.
The spanking new Type 97 is apparently a massive improvement on the Doctor’s old relic!
‘I was saved by Napoleon’s chicken pies!’
Luco the traitor is dragged away down the corridor and we here ‘No! No! Not the Mind Probe!’ floating back. You have to love how Dicks takes the piss out of his own work!

Embarrassing Bits: Did we really need to pop back to The War Games and meet up with Lady Jennifer and Carstairs again? The Players seem to pluck dangers from the Doctor’s mind to use against him and fortunately they seem to have been watching a few Terrance Dicks stories too! The Vampire and the Raston Warrior Robot both seemed like a step to far into self plagiarism and yet the former is handled with a great gag (see funny bits) the latter features in some of the books best scenes. Go figure.

Result: An extremely entertaining and quick read returning to us the Terrance Dicks who wrote Target books that we used to wrap ourselves up in our duvets to devour. This is far and away his best book for the BBC and matches his best work for Virgin as well, it’s a gorgeous trip through some very rich history that brings to life some great mythic figures and leaves you gasping at how fabulous this would have been on the telly. Dicks’ prose is as light as champagne and its effect is just as effervescent, it is deliriously enjoyable. He manages to tell a fast paced traditional Doctor Who story within an innovative new life for the second Doctor. This is my Terrance Dicks writing Doctor Who books again; efficiently plotted, well characterised and pleasingly educational. A joy to read: 8/10