The Tomorrow Windows by Jonathan Morris 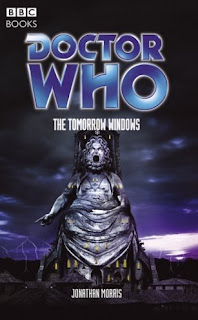 Top Doc: He has really found the fun since sorting out the trouble with the broken down universe hasn’t he? This marks as real development because the Doctor has come through his trauma with a brand new lust for life and it is extremely infectious. It is wonderful to see him having fun with some of his confused memories and he is utterly delighted to be told that he defeated the Yeti’s in the Underground, the shop window dummies at Ealing and the Dinosaurs in St James’ Park! His relationship with the Kendroid ('Ken we had a deal, I defeat the aliens from outer space, you get the buses running on time!') is really gigglesome. However he has lost none of his bite and he is extremely sarcastic and edgy at times ('Mankind will learn and it can’t do that if it can flick to the back of the book and look up the answers'). His philosophy: 'Why waste time when you can do it all in a mad rush?' His anger at feeling powerless to stop a planet being destroyed is extremely palpable ('You stupid, stupid fools!'). Saving planets never makes up for the ones he has lost. He has a nagging feeling he is in deficit, that he is seeking redemption. He feels there is always a way and when one doesn’t present itself he gets very angry. The Doctor’s favourite place to be lost is his thoughts. He condemns Prubert for introducing the selfish memes ('Do you have any idea what this idiot has done?'). He is never cruel and he cares for all. He and Trix finally bridge their differences, he realises how Martin has violated her and kisses her, stroking her hair and comforting her.

Scruffy Git: Fitz is still going super strong even after all this time. He looks into a Tomorrow Window and sees a toothless old man…then it shifts to a handsome chap with an olive skinned bride. It gets him thinking about the future and he is very unsure. He has been living in the moment for so long he has forgotten to think beyond it. He’s scared if he leaves the Doctor he will regret what he has left behind. One day, maybe soon he will get a life. He doesn’t know where he belongs, he has no family, no career, no way of determining his life. His adventures being hypnotised by a car would be patently absurd if it was written with such frightening conviction. 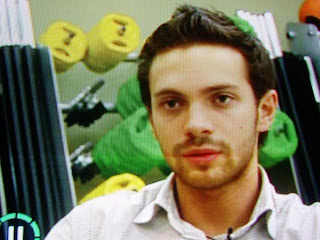 His Poirot scene (more on that later) is truly excellent and easily the best Fitz moment in his entire run until this point, displaying his wit, his intelligence and his physical ability. Oh and its hilarious too!

Identity Tricks: What started out as a one trick wonder is slowly developing into one of the more interesting companions the eighth Doctor has ever travelled with. What I love about Trix is that she is clearly so vulnerable underneath her bravado, it is very appealing, especially because you only see it when her guard is down such as it is in the latter stages of this novel. Saving planets is what she does. Delightfully (and imaginatively…when you find out the reason why) the book adopts a first person narrative for Trix’s scenes, which allows us to get closer to her than ever before. She is confronted with a cot full of mutilated babies about to be slaughtered and tries desperately to grasp a persona who can deal with the horror, further proof she is hiding from reality in these acts of hers. She cannot remember which story she is supposed to tell, she has spent so long trying not to remember that sometimes she can almost forget (which later transpires to be a deadly secret about her father, who was rushed to hospital after a confrontation, Trix angry and ashamed at what she had done). Annoyingly the Doctor can see through all of her disguises (even the Trix Macmillan one, which we later discover is genuinely an act and not who she really is) and see her, the real her. When it transpires that Martin has been reading her thoughts throughout, getting off her secrets Trix feels sick to the stomach that her privacy has once again been abused (after this and Reo she feels a girl cannot call her mind her own anymore!). She isn’t even sure if she remembers her past anymore because she has spent so long trying to bury it. In her best scene to date she manages to convince Martin that he is the most gorgeous bloke in the universe (with her thoughts alone) just long enough to get close to him and kick him in the nuts.

Foreboding: The Doctor looks into the Tomorrow Window and sees many possible futures but the image finally settles on…Christopher Eccleston!!! Trix’s confrontation with her father will return to haunt her in The Gallifrey Chronicles. 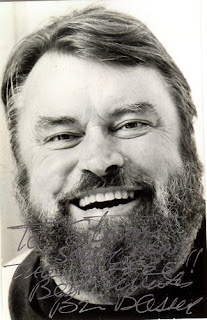 The Tomorrow Windows have been set up in Tate Modern to give people the ‘Gist of Things to Come’. Brilliantly when the Doctor looks into one it shows him several ‘possible’ futures (including Rowan Atkinson, Alan Davies, Eddie Izzard, Michael Jayston) and also some events (the Daleks/ the Time War?, the Nimon (Seasons of Fear). After making a speech Ken Livingstone’s head splits to reveal an electron bomb (leading to the brilliant line, 'The Mayor of London is about to explode!') and Tate Modern is reduced to rubble (hurrah!). The tribal war dance on Valuensis is brilliant. I love the ‘only God can save us now’ situation because all the jokes become suddenly, terrifyingly real and you realise these people are really willing to destroy their entire planet for one more glimpse at their God and that the Doctor can do nothing to prevent it. I love the Ceccecs, what a fabulously scary idea. All the auctioneers are marvellous creations and they all get a funny (in the spirit of taking the piss…Alien Bodies also gets ribbed!) introductory chapter (my favourite was Question Intonation: ‘Why have the creatures chosen to name themselves after a mode of speech. It is my firmly held belief that they do it to be annoying.'). The visit to Welwyn’s Gaia Sphere is brief but memorable, especially when he realises it has reached puberty! The Aztales are very memorable, their never neding conflict and their pretense of humanity is frightening. The Astral Flower, one of the natural wonders of the universe, is beautifully depicted in print and it destruction is tragic but similarly beautiful. The cause of all these planets having their populations wiped out is all down to the loathsome Martin, who is 14,000 years old and (basically) wants a load of cash to settle down (with Trix!). He wants to sell all the planets on the Galactic Heritage list but the troublesome populations need to be dealt with first so he employed Prubert Gastridge to pretend to be the God of these worlds and introduce selfish memes into their meme pools that will ultimately bring about their destruction. Then Dittero Shandy can take the auctioneers on a tour of the galaxy and get the bidding rolling! Gotta love Fitz’s Poirot sequence; proving peoples innocence ('I’m sorry Vorshagg, as much as you’d like to be I’m afraid you are not the murderer'), someone pointing out absurdities ('What would a lava lamp want with a planet?') and revealing the murderer to be Dittero himself ('I had to get the highest possible price by any mean necessary! I am an estate agent!'). Absolute genius. The pain Trix goes through is horrible but her revenge ('Well Mr Mind Reader, listen to this, you disgusting, effluent creep. I would rather die than kiss you. I can think of nothing more revolting then you, your face and your body. You sick, nasty pervert. I think I’ll kick you again') is very sweet. Martin fulfils Astrabel’s prophecy that he will die on Gadrahadrahon and shoots him but Charlton is there to show the younger Astrabel his notes.

Funny bits: Zoberly Chesterfield’s breasts seem to be forming an escape attempt from her brassiere. Prubert Gastridge is a hilarious reminder of all those ex-Doctor Who actors…once famous and now relegated to doing panto at seaside resorts and voice work! When it comes to saving planets from spooky alien tentacles stuff the Doctor is so 'da man!' 'What sort of person leaves a nuclear bomb unguarded? I mean its just shoddy, what is the universe coming to?' / 'God has excellent time managing skills.' / 'Any sudden moves and its hors d’oevres!' All the chatter about Earth is hilarious, especially, 'No other planet in the universe has produced a Rolf Harris!' and 'Ooh a moon…what do they call it?' 'They call it "the moon".' The line, 'The people get the government they deserve' is marvellously apt. One chapter is called The Tomorrow Peephole. The running joke about Gallifrey is perhaps the funniest thing in a book full of laugh out loud jokes…talk about taking the p*ss in style!

Result: Screaming with imagination, excitement, fantastic jokes and with a sense of whimsy that is impossible to dislike, this is one of those rare Doctor Who books that deserves its chart topping position. Every page has gags, dialogue and plot revelations that sparkled and the sheer number of ideas thrown at you is breathtaking. It is deceptively simple to read but contains a lot to think about when you are done rolling about on the floor with laughter, much of the humour having a touch of horror about it. The regulars gleam with interest, especially Trix who (again) is treated to some fascinating developments. Johnny Morris is one of my top three Doctor Who authors, he makes his novels look so effortless and yet clearly a lot of work has been put in here. Sublime humour (“None may sup the sacred soup!”) and a twisty turny plot make this a ruthlessly entertaining book. A top five (of all ranges) book: 10/10
Posted by Doc Oho at 23:20