The Pirate Loop by Simon Guerrier 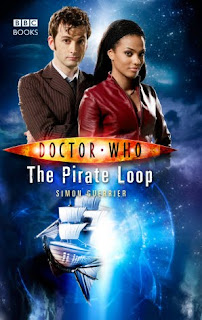 Plot: The Doctor and Martha decided to unravel the mystery of the Starship Brilliant and during the course of their investigations they discover that death is the best deterrent to war and upon learning that they both lose their lives…

Mockney Wanderer: You have got to love the Doctor’s track record these days, only four hours after landing at Milky Pink City (love that name!) he has broken the robots programming, incited civil war and brokered a peace through the power of Mika. What a guy! Martha finds his wide grin and enthusiasm infectious. He is really disappointed that he solved the mystery of the Brilliant in five minutes, after all a good mystery should take at least an hour. Everything was brilliant with him. He’s something of a rogue vigilante for the missing Time Lords these days, he claims if they had access to the time vortex he would have to stop them. He loves fixing things. He’s always going on about being the last of the Time Lords but on this occasion he just about manages to stop himself in time. He normally needs other people to point out that he is rude. Upon learning that Martha had been killed his thoughts turn darkly to how he feels duty bound to find her body and take her home to Francine and face the family’s tide of grief and anger. Once it never would have occurred to him to brave something like that if he could avoid it. Authority types trusted the Doctor because he was so useful. The transmat was so painful the Doctor has to check to see if he has regenerated. Stepping over the TARDIS threshold always put him at ease.

Doctor in Training: Some really nice characterisation of Martha in this novel, even if at times her empathy with the underdog is turned up to extremes. However even that is subverted when she is stabbed in the gut by the very creature she was cooing over. That’ll learn yer. Martha can remember some miserable family holidays and Tish the Tart chatting up the creeps. This novel is set after Human Nature and Martha has come to accept that the Doctor does not feel the same way about her even if he does give her the odd look to suggest otherwise. Francine’s house smells of strong to and cleanliness. She remembers playing late poker with the porters at the hospital. She hates being pushed in front of other people, her mum used to do that at functions and declare her ‘the middle one.’ The Doctor likes it when she shows initiative. Martha is a real Doctor even if the Doctor isn’t and she feels the need to help people even if the precious laws of time say otherwise. She hates being the centre of attention, especially at parties, she prefers to be invisible. The Doctor thinks she is clever and able and has got lovely hair! Tish had taught Martha the art of torturing boys and making them wait. Thinking her dead the Doctor says she always made things better and was going to do brilliant things. Her Dad told her not to worry about things you can’t control, the other stuff would happy regardless. Now she has met the Doctor she cannot sit idle.

Foreboding: Martha ponders leaving the Doctor soon, for her own sake.

Twists: There is a lovely bit of nonsense at the beginning of the book before things get fatalistic where the Doctor and Martha liberate a colony of robots built to amuse. Its worthy of a Roger Langridge comic. The Starship Brilliant vanished on the cusp of a galactic war. There are mouthless slaves in the engine room who can take instructions and not answer back. The Brilliant travels impossibly, skimming like a stone across the time vortex, travelling huge areas and missing the distance! Time weed is the stuff that lives in the gaps between moments. The Badger Pirates are quite scary simply because they act like idiot kids that hang outside the co-op at night, children playing at murder. Martha stabbed in the gut is a shocking moment even when you are expecting it. I loved all the discussion about cheesy pineapple sticks because it manages to comment on the class system just as Mick Lewis’ Rags did but without the flaying and eviscerations. You know there is something wrong when Mrs Wingworth antagonises the terrorists until she is murdered and as though she has won the class war she looks down on them as they shoot her. I loved the image of the pirate ship being a huge spiky peach whose spikes were invading shuttles that shot away like arrows and pierced the belly of the ships they were looting. Brilliantly once the badgers realised that they couldn’t die and that their bodies would be discreetly returned they see this as a lucrative opportunity and murder each other endlessly to replicate their gold earrings! The Brilliant has a rough idea of how things are supposed to be and ensure it fixes all problems, even death. They are sand banked in time, the bridge crew in another time zone, only four minutes after the attack. If you take the transmat you would be torn between two separate time zones! The badgers were genetically created to be slaves under the name of nature preservation. Ironically whilst they are killing each other over and over they have discovered the perfect recipe for peace ‘If they can’t kill each other they might as well get on!’ In an exciting moment Martha is almost sucked into space and thinks that the badgers are going spare some lives, when they slip their ship from the gut of the ship and let them get ejected into space. The Doctor commits suicide hoping that the loop will start again and he will be brought back to life! He extends the loop around the pirate ship and the story ends beautifully with an agonising choice. Escape the loop and be free in a galaxy at war or stay, trapped and safe inside the loop where the party never ends.

Funny Bits: ‘Humans doing what you do, daring to be brown and blue and violet sky!’
You can have a drink inside an ‘immature Mim!’
When Martha goes to shake hands she is asked ‘Is there something wrong with your paw?’
‘I don’t mean to be rude but didn’t I see you die?’
‘Its good that we’re such a close family really, it makes it much easier to hand out the subpoenas.’

Result: A small chunk of loveliness, The Pirate Loop handles some pretty weighty science fiction ideas but manages to keep the story bubbly and manageable. Once you have finished the book you realise this book has about as much death as the average Jim Mortimore and two of the best moments feature both the Doctor and Martha meeting their end. The story stays in one location and you could see how this could be realised on screen with lots of timey wimey cleverness. I love how Guerrier comments on slavery, the class system and mortality whilst still managing to make you laugh at the ironic tragedy of the situation. The ending is especially good, leaving the reader with some quiet thoughts about what they would do in the same situation. A real winner, bursting with intelligence: 8/10
Posted by Doc Oho at 23:49