The Algebra of Ice by Lloyd Rose 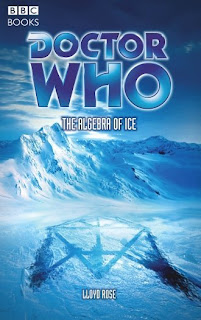 Plot: Crop shapes have been cut into the Kentish countryside, filled with ice. The Doctor joins forces with a maths nerd and a webzine publisher to take on a force which wants to drain the Earths energy and hack the TARDIS to squeeze the life out of time and space…

Master Manipulator: A fascinating portrayal of the seventh Doctor, particularly in a book that is trying to emulate the best of the New Adventures. As has been pointed out before it doesn’t entirely succeed at this, it’s actually better. Whilst the New Adventures spent so much time building up a mythology around the Doctor he was a cold and impenetrable beast but Rose never lets us forget that he s a person. That makes all the difference because all the New Adventures traits are here, the angst, the manipulation, the possibility of murder but it is tempered by a sense of guilt that truly makes you feel for the guy. Not only that but we actually get to see what the Doctor gets up to behind the scenes, a rare treat. I honestly cannot imagine a more emotional or comprehensive novel focussing on the seventh Doctor than this. Top marks.

Lately the Doctor has been distant, indulging in nostalgia. Firelight bronzed the Doctor’s eyes and made his eyes glitter. He has a surprising, crooked smile. He was too mysterious by half. The Doctor had his own way of doing things and the Brigadier couldn’t get used to this stern, tense, troubled incarnation. He doesn’t like to be contactable. When the 4th Doctor had chosen not to murder the Daleks how many had died for his virtue? When the 7th Doctor had made the choice years later how many had died for his sins? He had started out as an explorer anxious for new experiences. When had he started playing on a larger board, descending on a planet and ‘fixing’ things? He guarded the universe. He destroyed worlds. He felt he understood sin now and prayed he would never again exterminate an entire race. He wonders if he has a death wish, the creatures had reached out to him and something inside him had responded. Ace loves him so much she can’t see the bad things he has done. The Doctor was slippery, he embodied the unexpected. He wore that stupid hate to encourage you into thinking he was an idiot. He never looked back if he could help it. The Doctor, like the white rabbit, crawls down a hole into a world of magic and fear. The 7th Doctor is the responsible one; he is the only one who replaces the tea at Allen Road. ‘It was time for them to go’ he says of the Daleks. He hates it when the universe comes within a hair of blinking out, it gives him a ‘So glad I cancelled my trip on the Titanic’ shiver. The Doctor’s silent jealousy of Ethan is astonishing. The scene where Ethan realises the Doctor is going to kill him (‘You little monster!’) made me hair stand on end and the dialogue is fantastic (‘You’re trying to take it off you. Murder without murdering. You think I’m going to make it easy?’). He decides to sacrifice himself instead, becoming an energy bullet and murdering the creatures. Without Ace the Doctor doesn’t know what he would be. What he would become.

Oh Wicked: Just as marvellous is the characterisation of Ace who, had she been written for this strongly throughout the New Adventures I would have been a very happy bunny. As this is the bridge between the TV series, BBC Books and the Virgin New Adventures it is perfectly apt that she retains the air of an embarrassing teen she was on screen whilst indulging in sex and a more thoughtful mindfuck relationship with the Doctor so pursued by the books. It is a surprisingly interesting mix, at some moments Ace is painfully childish and explosive and at others she is shockingly mature and humane.

She always trusted the Doctor to be right but was frustrated when he stopped her from helping people. After being around the Doctor other people seemed flat and dull. Ace enjoyed breaking and entering and the Doctor always gave her good reasons to do it. Where the book gets really interesting is Ace’s involvement with Ethan. Initially distrustful and insulting to each other, things reach a crescendo where they end up in bed together. Freely admitting they have nothing in common but the sex, it is interesting to see Ace shift her love for the Doctor onto somebody else for the first time. Watching her pussy foot around him, embarrassed by his embarrassment is surprisingly affecting. Also Ace’s attempts to reach out to Ethan, to learn from him, shows her at her best. Protection insults Ace but the Doctor shields her from the worst of the life she has chosen with him. She tells Ethan while he sleeps: ‘This isn’t life. Life can be wonderful.’ Perceptively Ethan sums up Ace in a few sentences: all she wants to do is smash something and sometimes she acts as though she is 13. Fighting Ace is like fighting an animal. Ace, a stupid little girl that the Doctor has made a fool of. If she knew about the Doctor it would hurt her for the rest of her life. The Doctor on Ace: ‘She loves me. She trusts me. Perhaps she shouldn’t.’ She manages to save the Doctor by being alive, hugging onto him and crying until her feels something. Brilliantly Ace visits Ethan many times throughout the last four years of his life and is holding his hand in hospital when he dies.

Foreboding: In a way this book is the ultimate foreboding experience. A precursor to the New Adventures it features Ace’s burgeoning sexuality, her desire for a female friend to confide in (Bernice), the first glimpses of how much the Doctor shields her from (with hints of what will happen in Love and War when she finds out how far he will go) and the book sets its conclusion just after Timewyrm: Revelation. The Doctor admits he would like to be handsome one day and thinks how nice it would be to wipe the slate clean and forget all his responsibilities. Hmm… 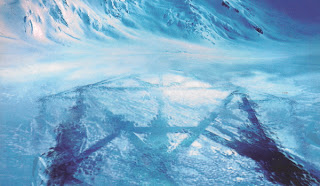 Twists: There is a worrying, fulsome first chapter that effortlessly fits in the death of Edgar Allen Poe, the destruction of Vesuvius and the sacrifice of Captain Oates…several times except they keep being rewritten and settling on a different version than what we know. The TARDIS had never looked so dramatic, its dark blue exterior the only colour in the bleakness of snow. Molecross’ withered, black frostbitten hand is quite disgusting. A shining, intense darkness tries to carry the Doctor away. There is some thinness between universes, crop shapes are like a keyhole into our universe that the Doctor can spoil by adding random shapes to it. Ethan can see the aliens that exist in the spaces between seconds. Ace and Ethan’s soap opera clinch – who would have guessed? There is a fabulous description of ideas on page 112: ‘An alphabet is static until it forms words, and the words refer to concepts, and the concepts move in the mind and become speech, and speech forms the world.’ Brett’s sadistic unprovoked abuse of Ethan is uncomfortable. The membrane is not as thin in the Swiss Alps but passable. Brett hitting the Doctor again and again until his face is just blood is really horrible. Brett’s nihilistic speech on page 188 is revolting. Unwin’s second set of equations was for hacking into the TARDIS. The creatures want to harvest existence slowly, thread by thread, they want all of time and space. The entity segueing in and out of Brett, a whirlwind of triangles and rhombuses, would look wonderful on screen. Molecross, absurdly happy to have meet the Doctor and experience the wonder he knew was out there, sacrifices himself as an energy bullet. The Doctor realises that his first instinct, to kill Ethan, would have murdered him and defeated his purpose. The last chapter might be the finest chunk of Doctor Who prose as the Doctor quietly visits a dying mans mind to make amends for threatening his life and touchingly gives him a gift of proof of the Riemann theorem, what he has always sought.

Funny Bits: Or that naff marmot planet. Of course The Doctor had defended the marmots. Said they were “humble”.
If this story had been televised Ethan would so have been played by Daniel Radcliffe!
Lethbridge-Stewart: responsible, intelligent and almost certainly without imagination.
The Doctor cross legged on the piano is such a perfect image it made me chuckle.
Ace trying to convince Molecross that the Doctor is not a government spy: ‘Oh bollocks! What are you on about? This is my Uncle John. He’s not a Doctor. He sells cheese.’
‘I think his lot reproduce by being woven by DNA or something naff like that.’
Page 196, Molecross’ reaction when the Doctor walks into the TARDIS: ‘It’s you!’
‘Ace I’ve told you that this borrowing of American slang must stop. Your speech is indecipherable enough as it is!’
I love the idea of the Doctor keeping all of his previous incarnations clothes in a wardrobe in Allen Road.
The UNIT file on the Doctor, personal statistics: variable!

Result: A rite of passage between BBC Books and Virgin which has been coming on for some time, The Algebra of Ice combines the most successful elements of both to create a very satisfying read. Like snow falling and covering a scene Lloyd’s prose is simple, elegant and beautiful. A book about mathematics and the cold, hard logic of the universe had the danger of being clinical and flat but this novel is laced with moments of warmth and beauty and some starkly emotional beats. It is a fantastic book for the 7th Doctor who is explored in some depth, amazing when you think of the word count this guy has had lavished on him but with hindsight it picks up on many elements of the NAs and elaborates and fleshes them out. His scenes with Ethan, Molecross, Brett and Unwin all shine, he orbits them and they reveal new shades of his character, be it jealousy, pity, revulsion or sorrow. It’s a book that mixes existentialism, sex, philosophy, torture and emotional development to grand effect. Quietly masterful and compelling: 9/10
Posted by Doc Oho at 09:15