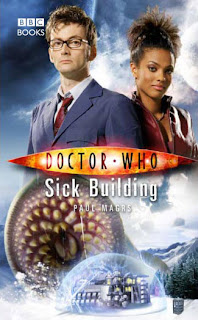 Plot: Tiermann’s world is a in a whole bunch of trouble as the Voracious Craw approaches. A giant tapeworm with a mouth the size of Wales, it will suck up and consume a town centre in a few seconds. The Doctor and Martha land to warn the few inhabitants of the planet…

Mockney Dude: The thing that impressed me so much about Paul Magrs’ take on the tenth Doctor was his incredible energy levels throughout. Seriously, he is whizzing about, gabbling away, fiddling and fixing in the first scene and he manages to keep it up until the last scene. He’s like an incredible whirlwind, sometimes a little prejudiced (which is nice, it would be awful if he lost that violently opinionated edge) and stubborn but he always trying to help even if its people that he cannot stand. The one moment where he stops moving is where Tiermann rails on about how the Doctor can never understand what it is like to lose everything, your home and your life. The silence that follows is real edge of the seat stuff and the Doctor just stares with deathly intent. Great stuff.

The Doctor operates more by luck than logic but there is something irresistible about his enthusiasm that makes your grin. He brandishes the sonic screwdriver like a gunslinger does his weapon! I loved the scene where he managed to talk down a hungry tiger with a placating, calming tone, communicating by his sheer strength of will. Does the Doctor not like Tiermann because he is conceited or is it because he is clearly of a similar intellect? Has he ever know luxury or peace of mind? He is intelligent enough to know that one does not lead to another. He believes in always taking his problems to the very to, especially if the very top is the very bottom! Once the Doctor charmed the Beast of Peladon with a Venusian Lullaby and now he calms a ravenous beast with Bohemian Rhapsody! As mentioned above, Tiermann tells the Doctor that he has never lost anything of value and there is a lethal pause in the action. The Doctor gets the verbal runs sometimes but he calls it morale boosting. He regales his friends with tales of Desperate Journeys and Foul Dangers! He has a strange, mysterious symbiotic relationship with the TARDIS. He was getting far too suspicious for his own good, always thinking and expecting the worst. I loved the bit where the Domovoi threatens to burst Solin’s jugular and let him bleed to death all over the TARDIS floor and the Doctor screams back ‘What do I care? He’s only some kid!’ Oooh, harsh.

Delicious Doctor: Not many writers manage to capture that magic of travelling in the TARDIS as well as Magrs and Martha’s observation that they are ‘stepping through those narrow doors into another time and place’ really sells the impossible magic of the TARDIS perfectly. I love her reaction to the bath that offers to top her water up for her! Even though they drove her mad as they were growing up, Martha would never be without her brother and sister. Martha has met her fair share of bullying surgeons and she knows exactly how to deal with people like that. I love how Martha springs into action as a medical Doctor so calmly. In a disaster, she understands her role. Solin has a mad crush on Martha and very politely tells her he would like to snog her! Whilst we don’t root about into Martha’s psyche like other books do we get to see most of the horrors of the Dreamhome through Martha’s eyes and she portrays the destruction and devastation very adeptly to the point that she forgets about the wildlife in the forest and just asks if they can leave once the Dreamhome is destroyed. She wonders what it would be like to stare into the mouth of a creature that can devour words…and later she gets to experience it!

Twists: That mouthy cover is unforgettable! I loved the prologue which set up the dangers really well, told from the POV of a starving sabre toothed tiger charging through the snowy woods, desperate to get back to her cubs as something dangerous tears through the foliage. The Voracious Craw is an awesome concept, a tape worm the size of a space ship that can devour everything on a planet. It is pale, putrid grey-green and its mouth is huge enough to swallow a town centre in one go. To a creature like this human beings are nothing, just there to be pulped and fed indiscriminately into that obscene, palpitating mouth. The Dreamhome is decked out with servo furnishings so that humanity would never have to dirty their hands with menial tasks ever again. It is like a giant tooth with its roots reaching deep underground. The Doctor is thrown down into the base of the root where the rot sets in. Tiermann creates a wall of flames around the Dreamhome to stop the wildlife breaching the barriers. The Domovoi is the spirit of the Dreamhome, the heart and intelligence that controls everything. Her mind is linked to all the servo units but like any decent Goddess she allows them free will. Unfortunately she isn’t happy about Tiermann’s plans to abandon them…and I love the chapter ending where she makes her feelings perfectly clear, trapping them all inside the Dreamhome, locks clicking, shutters clashing to the ground like an executioners block. I love the term ‘soft body’, servo furnishing slang! It’s a terrible taboo, robot killing robot. Tiermann has replaced his innards with servo organs to ‘improve himself.’ The Suckazz are heliscopic hoovers that deposit characters in their huge mountain of filth! It comes as no surprises that when they reach the surface that Tiermann tries to sell them out and escape in the rocket without them but what did shock was when he punched his son in the face and dragged him on board! The Domovoi drags the escaping shuttle back down and it punches a blackened, evil looking crater in the Earth. Amanda Tiermann is a cyborg, she had started out as a normal person but that wasn’t good enough for her husband, he made her better. Her face cracks open like a china doll (ugh). 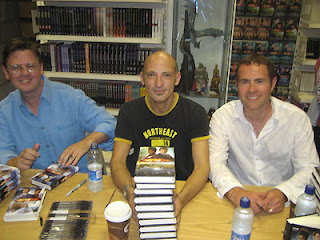 The Voracious Craw approaches; swollen, hungry, not even masticating and letting off a tremendous, revolting noise. Tiermann is such a prick – even when all is lost his ego demands that he stays and fights his creation to the death so the Domovoi reanimates his messy, bloody wife to kill him, nasty. He feeds his own wife into the waste disposal unit and smashes the glass brains of his most trusted servo unit to smithereens. The bloody creator and his deranged creation battle to the death. A possessed Toaster embraces him and uses the last of his radiation, leaving the insane genius a charred, smouldering form, utterly dead and smoking. They manage to scare off the Craw with the most terrifyingly primeval burp in history!

Funny Bits:
· What sort of council tax do you pay on a whole planet?
· Barbara and Toaster are two of the most adorable characters in Doctor Who’s history! A sentient vending machine that keeps trying to offer you chocolate and pop when things get tense (and whose cans rattle when she gets nervous) and a sun bed machine who in his prime could provide an instant sun tan like grilling sausages! He was like a supernova! You long for them to survive this story since they have been paid for a lifetime of servitude by being left behind to their doom in the basement! They live in awe of Tiermann, their creator and don’t feel as though they have the right to survive. ‘Its been a long time since anyone has shown any interest in my comestibles!’ says Barbara. ‘Have a little go with that gadget on my ailing parts.’ After Toaster saves them from the albino bats he declares, ‘All those years I spent just giving people suntans! I could have been a hero! A great warrior!’ Barbara offers to sacrifice herself to the Craw and hopefully she will get stuck in the craw of the voracious beast and choke it!
· ‘It would be such a shame to just let the Dreamhome be sucked up like so much pizza topping!’

Result: Fantastic title, fantastic cover and fantastic premise…a good start! A sentient house that controls all the furnishings, what a delicious idea to trap the Doctor inside and at its mercy! Paul Magrs has taken the kiddie friendly framework of the NSAs and worked in an ingenious premise that manages to be dark, twisted and wildly imaginative. It’s a gripping story, told practically in real time and it matches up to the best of the Target novels for sheer, gleeful thrills. I have rarely been this excited to read a Doctor Who book, marrying Magrs penchant for the surreal with a nastier, bloodier battle to the death. There are lots of inventive touches throughout but what really enthralled me was the relentless pace and the graphic, violent moments that lend the story some real dramatic weight. This is precisely the sort of thing the NSAs should be aiming for, effortlessly readable, pleasingly unputdownable and full of tension and invention. Give it another go: 9/10