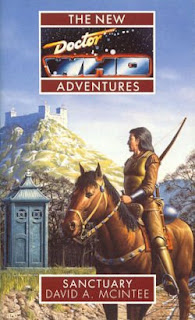 David A. McIntee is one of the most prolific Doctor Who authors. He has written 11 Doctor Who books over various ranges and two audios for Big Finish. His impressive CV also includes non fiction books of Star trek Voyager and Alien and Predator and stories for Star Trek, Final destination, Space: 1999 and now Twilight Of Kerberos: The Light Of Heaven. He has dabbled with history, space opera, thriller and comedy. Several of his books, Face of the Enemy, The Eleventh Tiger and The Dark Path are considered to be the best of their ranges.

Hi David, thanks for taking part. What are you working on at the moment?
Mainly comics right now – I’ve just done William Shatner Presents Quest For Tomorrow, and I’m now doing another licence for Blue Water Productions, which they haven’t announced having yet. Tie-in novel wise, again something I’m not allowed to mention yet…
I’m also in the middle of my first crime/mystery novel, and starting on a historical one.

How did you begin your work on the New Adventures?
I pitched the idea of novelising Mission To The Unknown – the single episode – as a full length Target book. Got invited to pitch original novels after that. I think White Darkness was the third pitch, maybe the second. I remember the first was called Moebius Trip and was about two universes inside each other – and Peter Darvill Evans said “think bigger!”
Trivia- The Veltrochni were created for that first pitch.

Your follow up to White Darkness was very swift, what was the reaction to your first book?
I don’t remember much of the reaction at the time, beyond Nigel Robinson saying people would cancel cheap trips to the Caribbean, and Ben Aaronovitch calling it “sinister”.
I knew we were coming up for the 30th anniversary after that, and so I pitched an idea bringing back Susan… Trivia again – the Tzun were created for that, but they were insects in that story.

The Doctor and Ace had been television characters, how did you find writing for Bernice Summerfield, a character created especially for the books?
Very difficult to start with, as I wasn’t online, and had only a six-page or whatever guideline to go on. And being told “she’s Emma Thompson in The Tall Guy” didn’t help, cos I never made it through that movie. Love And War hadn’t come out when I wrote White Darkness – they sent me a copy before I had the galley proofs to correct, I think.
For the next two books it was a lot easier, because by then I’d been able to read the other books.

Guy de Carnac was a fantastic creation. Can you tell us something about his conception and his potential spin off series?
He was intended to be the opposite of Benny, and sort of the anti-Mary-Sue. Writers often put themselves in as a main character’s love interest, so I put in the character I’d half dread being like instead.
There were meant to be more BBV audios, but with BBV going down… The novel series will happen, but it’s not a priority, as the publisher turned out to be a POD publisher, and I really want it done properly. 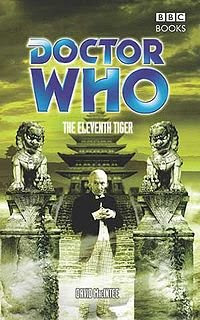 Your Missing/Past Doctor Adventures always feature unusual TARDIS crews; it’s something I really enjoy about your books. A story in season 16, the Second Doctor and the Delgado Master, a Pertwee adventure without Pertwee but featuring Ian and Barbara, the sixth Doctor and Frobisher from the comic, the third Doctor, Jo and Liz, the seventh Doctor and Sarah Jane. Were you trying to push the envelope as to what these books could achieve?
It was a mixture. Sometimes I wanted to push it, sometimes it was just a result of the demands of the story or the editors. So, Face Of The Enemy needed the right characters to ground it as a DW story without the Doctor, while Wages Of Sin started off as a Hartnell story and needed two slightly opposing companions… Bullet Time was just meant to use Sarah to show how different the NA Doctor was from the peak TV Doctor.

What was your favourite of the team ups above?
I’m not sure. Trout/Roger, Ian/Babs/Master/Unit, 7/Sarah.

You became known as the champion of the Master in the book series. He featured very memorably in several of your books. You dealt with his initial hostility with the Doctor, his dabblings with UNIT on Earth and his Survival after his torture on the Cheetah Planet. Tell us about your interest in the character. Which of these stages in his life was the most fun to write?
I actually saw the Ainley Master first (well, Beevers in Keeper of Traken *really* first) and thought the character was OK, but really got hooked from the old Target novelisations of the Pertwee era, which had him as a much more interesting opposite to the Doctor – the anti-Doctor as I keep saying, equal but opposite. Then when I saw Delgado on some bootleg videos from Australian showings of the Pertwee era, I was really hooked by his performance. He’s sort of… charming but lethal, a bit like Connery’s early Bond.
I was always also taken by the truism that you can get more depth out of a villain than a hero in a mythical series like this. By which I mean you can have a villain do good things without ruining him, while if you make the hero do evil, you probably either wreck him or prove you can’t do him right. Obviously there are exceptions, but you get the idea.
All three of the stages I wrote him at were equally fun to write, for all different reasons.

Sanctuary and The Eleventh Tiger are terrific examples of the historical genre. The former contains some disturbingly memorable images and the latter was a stylish trip through China of 1865. You captured both periods remarkably vividly, how much research goes into this type of novel and how much is embellished?
I do a fair bit of research- a lot of reading, both books and online. Obviously one has to embellish to get the right level of entertainment and serve the demands of the story, so the trick is try to do it in such a way that the audience isn’t sure which bits are true and which bits the author made up.

Is there anything you would go back and change now?
I’d do a lot less in-jokes. First time I did the Trek references, it was new, and other DW authors hadn’t done it – but by the time say, Sanctuary, had rolled around, it was already a New Adventures cliché. And also they really don’t fit that book’s tone…

Which book would you hold up as the best example of your work?
Beautiful Monsters. Or, of Dr Who, probably The Eleventh Tiger, with Sanctuary and Face Of The Enemy chasing it.