The Final Sanction by Steve Lyons 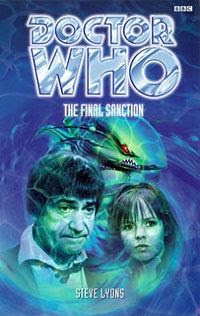 Plot: The Doctor, Jamie and Zoe are caught up in the climax of the war between Earth and Ockara, the paranoid and xenophobic humans and Selachians both trying to hold on to their empires. Whilst Jamie is enlisted and Zoe is a prisoner of war, the Doctor is forced to make some history altering decisions to make sure his friends come out of this one unscathed…

Oh My Giddy Aunt: The second Doctor is so often exploited for his comic potential it is fascinating to see him portrayed so totally straight throughout. I have no doubt in my mind that Patrick Troughton would have made this gripping material dazzle. The Doctor’s little gestures are often an apology for getting his own way in advance. His expression suggests that all the misfortunes of the universe are a personal disappointment to him. He looks like a tramp or a comedian, but his face is serious and his eyes betray a keen glint of intelligence. The Doctor is always surprised at how small tyrants are compared to their reputations. Its as if, despite his vast experience, he still couldn’t imagine how evil could come in such a small package as a human being. The Doctor is willing to sacrifice his own life to save Jamie’s. Zoe often feels that with the Doctor that nothing could harm her because he would always find a way to stop it. A pet hate of his is scientists who don’t consider the consequences of their work, who tried to absolve themselves of the responsibility. But he knows from experience how easy it is to get caught up in the joy of discovery, to pull at an enticing thread until you knew more about the nature of the universe than you ever intended to learn. His reaction to the massacre of the Ockaran village is shocking. Zoe has yet to see a prison that can hold the Doctor. The Doctor thinks of the great evils – Daleks, Cybermen, Ice Warriors – that he has been forced to destroy to stop them from committing greater evils. He always had a hand in their downfall but couldn’t regret what he has done. He knows he should let Zoe die, one life to preserve the future but she was his responsibility and he was the one who had dragged her into a life of peril. It is here that you realise that Time has much of a ball chain around the second Doctor’s neck as the first, despite their different outlooks on life.

Who’s the Yahoos: Where Jamie comes from war is honourable, there was no laying traps or lying in the mud but real fighting, hand to hand. He is described as decisive, uncomprehending, well muscled and healthy. He can barely comprehend the thought of setting off a bomb that could destroy a planet. Sometimes the Doctor envy’s Jamie’s ability to sleep through anything. Chapter seven sees Jamie at war and it is a gripping glimpse at how strong and resourceful he really is, facing underwater monsters and surviving. Jamie develops a strong bond with Michaels, almost father/son which really strikes home the paranoia of the human race when Jamie steps in and refuses to see an entire world destroyed and they end up at each other’s throats, literally. He is clearly very moral, telling the young Selachian about the G Bomb and the humans plan to wipe out their planet. Jamie smiles when he realises he has done exactly what the Doctor would have done, refusing to let the humans detonate the bomb and refusing to let the Selachians murder a human, and thus both sides hate him. When a Selachian attempts to commit suicide simply because he is a POW, Jamie is horrified. 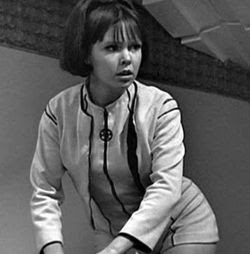 Brainy Babe: Zoe wonders why the TARDIS persists in seeking out the ugliest, least hospitable worlds in the universe. Zoe was bright and resourceful, if only she had a chance to prove it. The Doctor was prone to making mistakes so with him she always felt useful. She learns a harsh lesson in racism when Patterson beats and kills a helpless Selachian to death. Her torture is painful to read, it is horrible to imagine the bolshie but tiny and beautiful Zoe being treated so violently by the Selachians. Zoe realises that logic is not always useful and fairness can sometimes be more understandable.

Twists: The first chapter is a gripping scene setter. The TARDIS crew stumble onto a beach strewn with corpses, prisoners that have been executed. Chapter Eight is a short and bittersweet reflection on the war from the eyes of a dying Selachian, possibly the most poignant moment in the PDAs yet. Chapters are told from one persons POV throughout, a nice narrative touch that proves these characters can hold their own. The Selachians crippled themselves in their natural element for the sake of maintaining power and a fearsome new image above water. The Doctor talks with Mulhullond knowing that in six months she will hang herself (and with him making her question her creation of the G Bomb, it could very well be his fault). The concentration on the G Bomb, the moral dilemma of exploding such a devastating device gives the book a real dramatic punch. Jamie and Michaels having a punch up in front of the bomb is a really effective image. Michaels guts are blasted as he releases the bomb, the Selachians sacrifice their homeworld in order to capture another bomb to destroy the Earth.
Result: “It’s a lot more difficult to stop a war than to start one” The Final Sanction paints a paranoid and racist Earth Empire in the wake of the Dalek Invasion and an ideal backdrop for this gripping war story. I am impressed that Steve Lyons managed to maintain his fatalistic tone throughout and whilst this book doesn’t give you many moments of relief it holds your attention thanks to the interesting support cast and the gradually unfolding dramatic dilemma. Much of the tale is told intelligently from the point of view of the regulars, none of whom are used to this sort of punishment and Lyons manages to shine a light on some new character insights. The Second Doctor in particular is beautifully handled; facing the sort of nightmare decisions his predecessor is famous for. Occasionally the author gets on his moral high horse and talks down to you but for the most part this is a fascinating novel, experiencing a war from so many varied and fascinating perspectives: 8/10
Posted by Doc Oho at 08:53