Plot: The Doctor is hunting down a criminal and his leads point him to Peladon. Here he is embroiled in the politics, meets his old chum Alpha Centuri, is sentenced to death whilst Bernice engages in some romance. No it’s not the plot of Curse of Peladon! What do you mean they sound exactly the same? Oh get away with you!

Master Manipulator: The Doctor can pilot the TARDIS whilst doing magic tricks. He didn’t venture into Ace’s room too often, scared of what he might find in there. He never noticed how much she bottle things up. Bernice thinks the Doctor’s pockets exist in another dimension. Compared to the elegant 3rd Doctor, the 7th looks like he has been dragged through a hedge backwards. He has something alien and unpalatable in his eyes.

Boozy Babe: Bernice is pretty lazily characterised in this, despite her bold decision at the conclusion. All her best attributes are there, she gets pissed, she lusts after somebody inappropriate and she bollocks things up as much as she sorts them out but she is lacking the intelligence and wisdom that tempers these faults and makes her a perfectly flawed person. Here she is just loud, brash and stupid. She doesn’t even realise that the one man that could be the villain of the piece is the one she is lusting after until the plot requires her to and she suddenly snaps and goes “You were the killer all along!” or words to that effect. She studied Martians because it was the regression from warring that fascinated her. At the end of the book she decides to leave the Doctor for a while and asks to leave on good terms.

Oh Wicked: Who? Oh Ace! Yeah she appears in two or three scenes, just to remind us she’s still around. Her jacket and her gun represent her two lives.


Foreboding: Bernice heading off without the Doctor leads directly into her investigations in the next book. The first mention (and appearance) of Irving Braxiatel but again the next book would elaborate with far more skill. 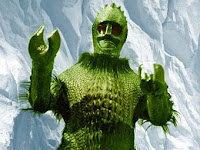 Twists: Part One is an interesting look at Peladon over several generations. The Diadem from Pahka has been found and whoever wears it will plunge the galaxy into never ending warfare. Keri the Pahka is a terrific character, I’m glad she returned. Lianna being skewered to the wall is nasty, as is Jav being thrown out of the window and bouncing off the rocks into a pulpy mess. The moment Savaar declares he will be beheading the Doctor is excellent, “Tomorrow, Doctor, the ‘Ice Warriors’ will finally get their revenge.” Nic Reece’s fingers are sliced off. Peladon leaves the Galactic Federation. 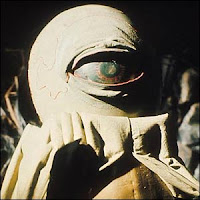 Embarrassing Bits: Gary Russell has arrived so the blatant plugging of gaps in continuity have begun!
* Geban is Torbis, Atissa is Hepesh, Nic Reece is Eckersely, Alpha Centuri is Alpha Centuri, the Doctor is accused of blasphemy and sentenced to death, the Ice Warriors are on Peladon, the Doctor is distrustful of them…in the words of Terrance Dicks this is either a pastiche of Curse and Monster or a complete rip off, depends how generous you are feeling.
* The book lacks subtlety – a character on page 60 is sad because the trooper who has just died is one that he wanted to shag!
* In-jokes ahoy – there is a bald character called Briggs (Nick Briggs) and Izlyr is said to have retired to the planet Bennion (the guy who played him).
* Page 106 should have been page one – useless build up when the real plot starts on Peladon.
* Another step back in Ace’s portrayal, she’s sleeping with other people’s men and hugging a blaster in her sleep like a child would a teddy. I can’t think why the Doctor didn’t want her on a diplomatic mission!
* Page 118 – and now somebody had beaten her to this hamster…this has to be read to be believed…
* Bernice gets dialogue like, “You dark horse Doctor, you didn’t tell me you know someone as horny as that!”
* Why does everybody on Peladon hang about in corridors plotting loudly outside the quarters of the people they are plotting against?
* Pages 156-160 read like Agatha Christie never existed. Call this a murder mystery? The detective skills the Doctor displays here would make the Famous Five cringe. And the Doctor’s final, awe inspiring revelation: “As the body was moved, it splashed blood on the spot where the murder occurred!”
* Page 179 contains some of the worst characterisation I have ever read. In any novel.
* On page 204 the Doctor idly chats about his adventures like chess matches – what was once a subtle metaphor has become an irritating character flaw
* The revelation of Nic Reece being the killer is interesting because as soon as it is revealed all of the characters admit it was obvious leading you to think Russell might be pastiching the murder mystery genre. However, leaving this revelation to the last possible moment to reveal leads me to believe that this was supposed to be a genuine surprise.
* If the Doctor knew that Nic Reece was the killer all along that means he waited around whilst Jav, Atissa and all the others were killed, just so he could get closer to the Diadem! The only time he seems to care that a killer is roaming about is when Bernice heads off into the caves with him! Callous bastard!
* Reece’s plan is to turn Peladon into a tourist trap and brainwash everybody…that’s the third book in a row to use the same rubbish idea.


Result: The third underwhelming book in a row. What can one say about Legacy? It’s certainly not the worst New Adventure, but it isn’t far off. My biggest trouble is the author’s clear obsession with Doctor Who and how the plot suffers so he can stuff more and more continuity in. The narrative itself is made up of the previous Peladon stories with only jarring moments of violence feeling like heartbeats of originality. On every level this reads like an amateurish first attempt, the prose is enthusiastic but unprofessional, the characterisation lacks depth and the plot hinges on characters behaving like idiots. Has the editor fallen into a long sleep recently? Ace is shunted off into a dead end plot (hardly the worst crime an author can commit) and Benny lacks the wit of previous adventures. I might sound like a Moaning Minnie but all I want is a solid, well written story that rewards and surprises. This doesn’t even come close: 2/10
Posted by Doc Oho at 11:46