Plot: The islands of Dorsill are a calm and peaceful backwater, free from technology and the chaos of modern society. The Doctor and Peri arrive in need of a holiday but soon realise things are not quite as tranquil as they seem. Bodies are being exhumed from graves, madmen roam the shoreline and a dangerous experiment is nearing its completion…

Theatrical Traveller: It is a beautiful take on the blustering sixth Doctor, as much as I admired Gary Russell’s softer version in Business Unusual it felt a tad too cuddly to be the same guy who exploded across the telly in the eighties. Here Justin Richards (who more than any other writer I feel managed to capture his regulars with frequent success) writes a warm and friendly sixth Doctor, but one who can turn nasty and dangerous on a whim. He frequently chides Peri but there is genuine concern for her safety. When the Doctor says: “You may not like me. You may not like what I do, what I shall have to do. But I’m here to help and that maybe that I am the only help you have” Justin Richards has summed the sixth Doctor’s entirely existence most eloquently, I think. He can metabolise alcohol with no effect, thus he can down several pints of the infamous Fisherman’s Ruin without making a tit out of himself. You can’t but help loving him when he turns embarrassing mishaps into calculated diversions with comic results. He is surprisingly flattering and charming, especially with local gossip Mrs Tattleshell, he knows what its like to be old and under appreciated. He likes children, there is an innocent charm about playtime that attracts him, where the definition of suffering consisted either of detention or boiled cabbage! The Doctor laughed with the children while they played and for a few seconds life was wonderful. In a lovely scene he is seen calming rowing across the sea enjoying the peace. He is the sanest person he knows. He makes people realise their mistakes, throwing in their faces when they try and make excuses, far less patient and understanding than other incarnations. “What right do you have to deny them Doctor?” “Because its wrong.” – Richards takes on board one of the most important feelings Colin Baker himself has about his Doctor, the fundamental sense of right and wrong in the universe. He will step in and act if he thinks things are wrong, even if it means people will suffer and experience pain (such as here where the human race could never have to grieve or suffer any sort of pain again). He loves flying about in the helicopter at the end of this tale, and swings it around for another just for the hell of it.

Busty Babe: There is something rather wonderful about the Doctor and Peri staying up late in a pub and enjoying themselves with the villagers of Dorsill, a warm scene full of character that they were denied during their busy and gaudy adventures on the telly. Since meeting the Doctor Peri had wondered whether she was dreaming or sleep or mad. From experience she knew now that the event she was witnessing were horribly, undeniably real. She also knew that more often than not it was up to the Doctor and herself to confront the bizarre and the horrific and stand against the forces of the night. She used to want to change the world but now she just saves it. Peri says she gets confused mostly and the Doctor is the one who does the confusing. I love how Peri stays silent even when she realises that she has been infected with the alien virus, not wanting to distract the Doctor with concerns for her safety.


Twists: There is a lovely gothic opening, a shambling wreck of a man being pursued over the moorland until he falls over a cliff. Peri nearly goes the same way but is rescued by a man with only two fingers. The Doctor and Peri witness a funeral and one of the pallbearer’s slips and the coffin cracks open on the cobbles, the face staring up at Peri. There is something hilarious about watching sheep shepherding the sheepdog! In the first of many macabre scenes Edward Baddersley digs up William Neville’s body and lugs him home in a wheelbarrow. When they re-bury him, Neville splits open his coffin and rises from the dead. When Dave Masden realises he has been infected with alien material he takes desperate steps to kill himself, all with no effect. First he tries an overdose, then slitting his wrists and finally he slips a shotgun into his mouth and blows half his head away…but alas he keeps waking up. Dead fishermen rise from the sea and strangle Mike Neville. There is a glorious chase across the beach, Janet trying to cough the motorboat into life but dead men attempting to drag them all under the waves. The Gatherer Space Probe came back with alien genetic material- Denarian (after DNA)- a universal cure all. The cultivated the Denarian in a human incubator (Christopher Sheldon) and bought the islands to and moved Dave Masden to test the material and its affects on the villagers. But now it has skipped a generation and is actively taking over people in order to survive. The image of the dead Neville serving tea to the Doctor and friends is grotesque. There is a great cliffhanging chapter end that sees the Doctor and co trying to escape and opening the front door of the mansion and watching the possessed villagers approaching, led by Dave Masden, his head a mass of blood and broken bone. Packwood X-Rays himself to death to kill the alien inside of him. Chapter thirteen is absolutely brilliant, Peri is attacked by owls, foxes, sharks, zombies…the works as she attempts to make it to the mainland and call for help. When she gets through to Madge we realise that Sir Anthony should be in a wheelchair and he is in fact the controlling Denarian influence! Peri shoots Masden with a flare gun! The Doctor develops a strain of Denarian, which just cures, doesn’t control and administers it by having a while of a time riding about in a helicopter. 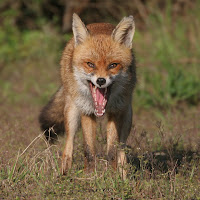 Funny Bits: Justin Richards has a great time playing with all the horror clichés. “We don’t have strangers here,” says a villager but what he means is tend not to get rather than actively discourage.
Richards sets his gag about the date up beautifully, with no modern trappings the Doctor and Peri believe they are in the Victorian era. So the Doctor is hugely embarrassed when a helicopter flies overhead and the Doctor attempts to explain this amazing ‘flying machine’ to astonished villagers when they are in fact just gasping because it is out in the fog!
Janet Spillsbury, under the influence but still trying help, exaggerates her lies so they know they are truths: “That is not, I repeat not a coal chute behind there and there is no way you can get out through it.”


Result: One of the most unpretentious books in years, expressing its influences with pride rather than embarrassment. Justin Richards can write this sort of tale in his sleep, which is hilarious because it’s much better than a huge chunk of the PDAs; it is a wildly entertaining and cosy tale of horrific goings on. The Doctor and Peri are actively involved in the plot and get to enjoy some lovely character moments they were denied on the TV. From Richards you expect the clever plotting and ideas but what I really liked was the mixture of horror and the scientific, there is a good reason for every one of the disturbing moments in this book. The highlight for me was Dave Masden blowing his brains out…his hands scratching at the floor as he gets up again: 8/10