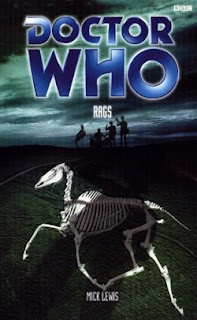 Plot: People are dying in unspeakable ways. A new band has formed, playing hate filled gigs which is setting the world of class hate alive. The Ragman has woken and he will tear the world apart in violence and destruction…

Good Grief: Rags is quite a misunderstood book, especially where the Doctor is concerned. It does appear that he is sidetracked for much of the book and just pops up at the end ala the seventh Doctor from the New Adventures but there is much more exploration of his character than that. His nightmares inside the Ragman’s cattle truck reveal his insecurities like no other novel in this vain and for one of the first times it feels as though the Doctor has genuinely been beaten.

The Doctor loves the Brigadier dearly but he would never admit such a thing in public. A pompous old devil? He believes his exile on Earth is the equivalent of the Time Lords shoving him in a retirement home. As the Doctor explores the nightmare realm of the Ragman his hearts race with each other and a primal fear roars inside of him. The Doctor is an Everyman, a Man of the People, a wanderer with no distinction, no shackles. He topples tyrannies, tramples on egocentricities, an orphan in space – condemned to search for meaning and yet trapped on Earth. He feels he abandoned Susan, running away from his responsibilities as usual. He is tortured with a vision of himself burning at the stake, his old companions stoning him. Another features the TARDIS being clawed to death, a floating tomb adrift forever in the vortex. The level of self-doubt he goes through is astonishing. Perhaps his past, Gallifrey, his travels had all been a dream within a dream. Perhaps there had been nothing more than an empty police box and his delusions to fill it. Inside a fake empty TARDIS the Doctor tells Jo: “Perhaps I don’t want to play anymore. Perhaps I want to go home. Wherever that is.” When he finally stirs his stumps he confronts the Ragman with renewed vigour: “You’re a morphic monstrosity, a mutation of cosmic spew and human indignities. You are scum, Ragman. Scum from the end of time.”

Dizzy Agent: Woah! Now this is a slap in the face for all of those people who find the Pertwee era safe and cosy. From dizzy, clutzy hang on to insecure, bisexual dope head, Barry Letts would have had a heart attack if this had been submitted! It is shocking but great fun to read, a million miles from the snugly, silly biblybiblybibly Jo we are used to.

Jo can giggle her way out of the Doctor’s bad books. She isn’t easily fooled despite her goofy surface act. She was really growing with the Doctor as a companion. Jo has never been a fan of punk; it always seemed too violent and nihilistic for her. She feels lonely and excited at being left by the Doctor to follow the tour. She had the air of somebody who had been away for a while, someone who is normally in tune with the times and liked to be as trendy as possible but had recently been whisked off somewhere that fashions didn’t or couldn’t reach. 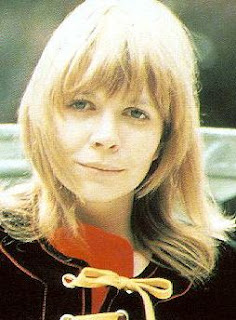 Is she brainwashed or liberated by the Ragman? That is for the reader to decide but here she has grown tired of the Doctor’s meddling and is pissed off that he thinks she cannot cope on her without backup. She gets embarrassed by Mike Yates’ presence and hideous hippy disguise and threatens to blow his cover unless he leaves the gig. Now she has normal friends who believe in things other than interfering other people’s lives. She understands why they are pissed off with the consciousless, consumerist society. She feels she is dragged from one horrendous conflict by a man who purported to be on the side of freedom yet needed the support of the military and all of its stifling, conservative authoritarianism to back him up. Ouch! And after all these admissions she snogs Sin hungrily towards the climax of the book.

Chap with the Wings: The Brigadier becomes all bluff and flustery if he ruins one of the Doctor’s experiments. One of his more endearing habits was his irritating knack of putting his finger clumsily and unerringly on the most sensitive area. He firmly believes a disciplined mind comes from a disciplined lifestyle. It is terrifying when even he comes under the Ragman’s influence. The Brigadier is the one man on the Doctor’s travels who you can count on totally and his sudden turn into a violent, uncaring soldier leaves you wondering how anybody in this book is going to survive.

Ewww: Rags has something of a reputation for being the most disgusting Doctor Who book ever written. I don’t think it is entirely unjustified. Lets take a look at the evidence…

Roger is stabbed with an ancient dagger.
Animal is smacked over the head with a tyre iron.
Alf gets a corkscrew in the eye.
A pickaxe is driven through Officer Evan’s chin.
Officer Jellard’s head is smacked in by a shovel and he is hacked to pieces by garden shears.
The lead singer spews a green waterfall over Sin’s face and she feels grateful to be chosen!
A leg trap is wrestled around Edward’s throat until blood squelched over his red livery.
Kane has slugs, worms and spiders shoved down his throat until he is choking on his own vomit.
PC Williams bludgeons his wife’s brains over the wallpaper with a golf club and dismembers his daughter. 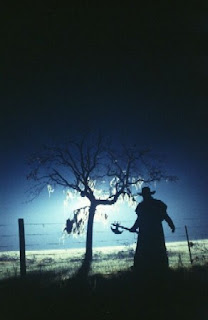 Pages 95-96 – the band spit out blood and vomit as they sing, then one singer vomits maggots over the crowd, grabs Sin and snogs her violently, hacking up maggots in her mouth! Eugh!
Alcoholics butcher executives, slashing with broken wine bottles, mutilating with hoes…
Princess Margaret shoots down her own assassin in front of TV cameras.
Willis blows his brains out when his political career goes down the swanney.
Simon ploughs his car into a standing stone at 68 mph, the village refusing to let him leave.
A sergeant’s head is pounded repeatedly against a standing stone until his skull is smattered over rock like bloody broken eggshell.
A screeching sergeant has his eyes gouged out and his ribs kicked in.
One policeman has his throat slashed and his blood collected in his helmet.
A bobby has his arms and legs popped from his sockets.
A UNIT soldier is shot in the throat releasing a torrent of blood.
Counwall is strangled by a noose, his tongue hanging obscenely from his mouth.
Charmagne impales Sin to the Ragman with a pitchfork in her chest.

Twists: The cover is excellent, extremely atmospheric. The prologue, where young Kane finds the story of the Ragman in the library, is full of foreboding and fear. The band singing is described as a murder of a song, which paradoxically threw out hooks of harmony at once irresistible and repulsive. Page 62 is truly terrifying: ‘the zipper man came for Penelope. But not all at once. He took time to take his instrument of choice – a long, viciously hooked gaffe – down from the wall, and displayed it for her with relish, like a shopkeeper demonstrating his wares, as the music burst into brutal orgasm beyond the pub walls and Penelope screamed and screamed and…’ Willis and Pole scheming together is great, Princess is due for a visit, there is a demonstration of the Rural Country Sports Brigade and the Mummer Band will be present too. It will be like a powder keg waiting to explode, the most effective demonstration of class hate in Pole’s career and it will discredit the government and thus allow Willis and the opposition to move in. Charmagne being dragged into the cattle truck is positively terrifying, trapped with the Ragman in the filthy void. Jo turns on Mike once his cover is blown. The creature was conceived within a womb of rock spinning through the radiation-bathed flue of a black hole, cosmic spawn without rhyme or reason. It was attracted to the Earth and adopted and worshipped by primitive man. His birth from the rock took place when a mummer trips on a courting couple on the Downs and has his brains smashed out, blood splattering over the rock and birthing the Ragman who brings the mummer back to life, kills the man and rapes the woman. Inequality and oppression, conflict and intolerance are the first emotions and concepts experienced. He champion’s equality and nullity, all classes shall be equal in death. Kane and Charmagne are both descendants of the Ragman and it is Kane who eventually defeats the creature, putting down his great grandfather, the pair of them trapped in the stones for eternity. 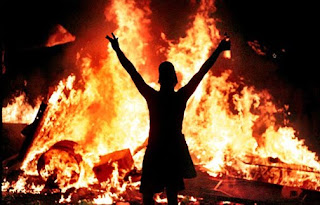 Result: A bloody, visceral, slaughterhouse of a novel. Thanks to the beautiful, perfectly paced and chosen prose the violence and horror in this book transcends the usual ‘shrug it off’ affect from your average Doctor Who novel and well and truly frightened me. Rags is a horror story, something the show excels at and this is one of the best ever stabs at it in the Doctor Who universe. Blood spills from every page, as human beings are torn apart in the most horrendous fashions you can feel their pain in their last moments of excruciating agony. Never before has human misery and suffering taken on such presence, a force of its own. Rags is a perfect example of what you can achieve if you destroy the boundaries of what you expect Doctor Who to be….its like rolling around in mud completely naked, a totally filthy experience. And I loved it: 9/10
Posted by Doc Oho at 07:53