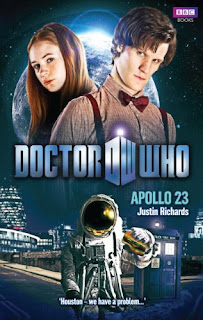 Plot: The Doctor and Amy investigate sinister happenings on the moon where prisoners are being treated in a mind altering fashion…

Nutty Professor: Considering the lack of material he must have had to write this book with it is astonishing that Justin Richards manages to get the eleventh Doctor as accurate as he does here, right down to his quirky, effete mannerism and rapid dialogue. He hasn’t had lunch for centuries and so is delighted at the prospect. He hadn’t died for a couple of months now but found that whenever it did it always gave one hell of an appetite. I love how he can turn up on the Moon in his ridiculous goldfish bowl helmet and tell the first person they stumble across that he’s ‘just visiting.’ The Doctor has an out of control comb over even though he isn’t going bald! He doesn’t look old enough to have a doctorate in anything but its suggested it would be wit and sarcasm if anything. Polishing up on his infiltration techniques should be high on his priorities because when Walinski says he doesn’t look like a liar the Doctor replies ‘good liars don’t.’ The Doctor does the honourable thing and drags Devenish’s body back to Texas and loses what he thinks is his last chance to save Amy. ‘Don’t ask, just believe’ is just about the best reaction you could ever have to the Doctor. He rubs of on people and inspires them. He’ll d 6o impossible things before breakfast and still have time to make the toast. Wonderfully he screams ‘Geronimo!’ as the shuttle ascends! The unforgiving Doctor has no qualms whatsoever about forcing Garrett out into the deadly blackness of space and even has an acidic sixth Doctor retort for the moment (‘He went outside. He might be gone some time’). At one point Amy has been so clearly taken over that I’m pleased that Richards didn’t even pretend that the Doctor was convinced for a second or keep the pretence going for longer than one scene. The Doctor trying to shake hands with one of the sweaty Talerian appendages is very funny.

Scots Tart: Oh Amy Pond. This is what I consider to be her first novel (like The Clockwise Man it makes sense for the range editor to kick start a new era) and so this was the first chance to see how she worked out in print. Not very well is the honest answer. Its not Justin Richards’ fault because he tries his best with so little to work with but the Amy Pond of season five is simply too dull and vacuous to transplant into a novel with any great success. Moffatt might have been working in some masterplan wherein her life is beguilingly revealed to her at the end of the season but that means for 13 episodes she is a blank slate. Karen Gillan is a fine actress and she tried her utmost with what she was given but frankly the only moments that I felt anything for Amy during that season was when I didn’t like her – when she was trying to cheat on the man who would give up anything to be with her (the lovely Rory). Otherwise she was just a feisty redhead who seemed unperturbed by everything around her and we’d already had a superbly characterised, complex fiery redhead in the series (the fabulous Donna) and unfortunately she just didn’t match up. Amy is Scottish and so she is used to rain, that’s about as engaging as her characterisation gets here. She is so lacking in character she ponders about tea and spiders and even takes a doze whilst the place is going to hell! There is literally nothing for Richards to grab hold of and elaborate so he sends her to sleep instead. It takes Amy ages to realise that she has walked into a trap of Reeve’s making – for somebody with such a smart mouth she can pretty dense at times! When she meets the prisoners who are emaciated and exhausted she exhibits a moment of compassion! It can be done! Amy has been mind-wiped! And we can tell the difference how? ‘She shouldn’t just be a pretty face, you know!’ says the Doctor. Ahem. 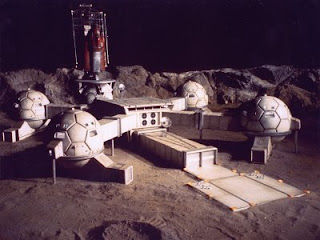 Great Ideas: Richards has been at this game for too long to not know how to open a novel and his opening line of ‘twenty minutes before he died’ entices the audiences interest immediately. Barbinger spends his last moments in such a mundane fashion I wanted to jump into the book and warn him that he was about to croak! The set up of the astronaut turning up at a burger bar and Barbinger dying of asphyxiation in exactly the same way that he would were he standing on the moon is intriguing (‘from Earth to the Moon, talk about a giant step for mankind!’). Recidivist prisoners are being experimented on on the Moon, they have all resisted conventional attempts to rehabilitate them. They were sent so far because of the dangerous, illicit government knowledge they have obtained during their crimes. It’s a fascinating premise and the Doctor’s response of ‘you do it up here on the dark side of the Moon for convenience or because its morally and ethically wrong?’ touches on a captivating argument. The Keller impulses (The Mind of Evil) are being washed away and the Doctor asks ‘who gave you the right to decide which ones are bad and which ones are normal?’ At this point in the novel I thought we were in for a substantial piece about the wrongs of mistreating prisoner and the psychological ramifications of what they were doing. When the argument comes to the scientist suggesting chillingly that the brilliant minds of critically ill patients can be preserved in the minds of these criminals the surface of a whole different book was scratched. Perpetual regeneration at the cost of a life. The brain abhors a vacuum so whatever they take out has to be filled with something. As the aliens are transplanted into that gap it is described as the scuttling claws of a rat creeping inside. Brrr. With a Richards book you can always count on the nuts and bolts of the novel making sense and he adequately explains why the base was sabotaged and why one of the patients is talking in a bizarre code. Apollo 23 is the dilapidated 30 year old standby space shuttle that flies the Doctor to the Moon! Naturally he thinks its ‘fab!’ There’s a terrific action sequence in zero gravity as the Doctor grapples with the saboteur that would have look gorgeous on screen. The image of the Talerian that literally explodes into the vacuum of space is an enduring one.

Embarrassing Bits: The guest characters are generally as functional as the prose and fulfil their roles but never break out of being ciphers. I couldn’t tell you anything about any of them if you prompted me now and I only finished the book half an hour ago. Sometimes Richards tries to make the Doctor too eccentric and it falls flat on its face (‘Doc is a dwarf. I am not!’). Is it just me or is this the quickest rocket launch known to mankind? The Doctor’s scheme to stick the ‘Pond Water’ (the minds of the people who have been taken over) into the sprinkler system and have their personalities literally rain down on them is so insubstantial and ridiculous I had to put the book down for a second to recover. It smacks of the similarly brainless solution to New Earth when the Doctor creates a cure-all and has the zombies touch each other to ‘pass it on!’ ‘The brain should be able to recognise its own mind print and just take the data that belongs to it. Like recognising your car in amongst hundreds in a supermarket car park!’ When I heard the books might be dumbing down a tad I never anticipated a climax quite this backwards. The Talerians then show up for the B-Movie climax wobbling their slimy, pustulous hides about and exploding about the joint like cut price Slitheen. They even have names like Commander Raraarg!

Notes: How odd that an Impossible Astronaut should turn up at the beginning of this novel in an incongruous location. It gets even weirder when the Doctor spends time in a Texan desert and fiddles about with a US space shuttle! I don’t know how much input Steven Moffatt had into the books during this period but there are a number of remarkable similarities to his season six opener. If that is the case then Justin Richards should slip a feather into his cap. Mind you the author isn’t above nabbing elements from other New Series episodes and the raining on the moon sequence felt very familiar (Smith and Jones). He mentions a penal wing on the Moon that he would be locked up in in the future (Frontier in Space). The Doctor didn’t think there would be a direct link between the Earth and the Moon until T-Mat got going (The Seeds of Death). I liked the mention of Control marking a crossover between the paperbacks and the hardbacks. Fortunately those in the US are in the know because they have read up UNIT and Torchwood files about alien incursions.

Result: An engaging read for the most part but not half the book it could have been. What a shame that Apollo 23 has to become an Invasion of the Body Snatchers style alien invasion because there is clearly a lot of dramatic and psychological potential in the abused prisoner scenario that Richards sets up. The prose is the epitome of this authors functionalism and is so bare boned for the most part that it could practically be called a screenplay. Richards is too much of a good writer to botch any novel but here he wastes so much potential by reducing what is a very dark and promising first half to an archetypal base under siege/invasion story with barely a glimmer of wit or invention in the concluding half. The characters barely register and Amy maintains her position as one of the most vacuous companions the Doctor has ever travelled with but Richard’s depiction of Smith’s Doctor is right on the money and provides some terrific moments of levity. I wanted more intelligent discussion and less blobby monsters and it frustrates to have a carrot dangled in from of you and then snatched away. Still I can’t complain too much about a book that lets the Doctor drive a space shuttle, march across the lunar surface with blue murder in his eyes and inadvertently cause a whole bunch of monsters to spontaneously combust! Not a bad start to the 11th Doctor novels but the best is yet to come: 6/10