Judgement of the Judoon written by Colin Brake 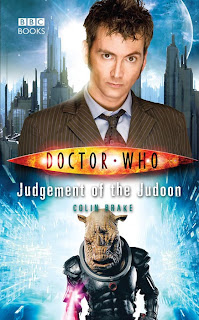 Plot: The Doctor, a young investigator and Judoon Commander become embroiled in the machinations at New Jupiter…

Mockney Dude: I’m not going to lie to you…you’re not going to get the most dense characterisation of the Doctor in a Colin Brake novel. You’re just not. Saying that he manages to write a fair intimation of the character as seen on TV with lots of quirks and ticks that match David Tennant’s portrayal. Apparently his eccentricity accentuates his natural goods (I wouldn’t argue with the last bit). It must be an NSA if the Doctor gets saddled with teenage sidekick but lets be honest he’s a big kid himself so he works on their level! He deals in crisis management without the management. He loves a good mystery and he loves four even more. A Judoon companion? Who would have thought that could ever have been as effective as it is here? I think it’s a great idea and I’m willing to bet that a lot less people would be willing to point the finger at the Doctor on his travels if he was backed up by a grunting, leather clad rhinoceros! I love the way he provides such violent distractions while the Doctor gets up to no good in the background. The Doctor is easy to like a fits in anywhere. There’s something secretive, lonely and grief stricken and lonely about him for all he tries to cover it with smiles and smart alec comments. The Doctor finds it easy to tar all of one species with the same brush despite the fact that he is always meeting the exception to the rule. Trustworthy and full of honour. He can convince you that you have had a conversation and come to a decision when he has done all of the talking! Beneath his energy and relentless enthusiasm there is a sadness and bitterness. With a book as predictable as this it is a relief that at least the Doctor is privy to each twist and turn because I couldn’t bear it if he was this stupid. The Doctor had found good company on New Jupiter and the TARDIS feels so empty without a companion. He has had the feeling for some time that change was coming, something lurking in his near future. Something big, terrible and inevitable…

Great Ideas: The Judoon are thorough but far from gentle and their sledgehammer tactics are a cause for much drama (leaving hull breach in a ship after cutting into it for access) and humour (the Commander crashing through a door rather than walking through it!). They always get their man but its usually at a pretty high price. 2487 and the human race is established amongst the stars, colonies scattered about and hyperspace making travel over incredibly long distances commonplace and swift. The King of Elvis spaceport is right next to hyperspace nexus point on an otherwise uninviting world and has grown from an automated fuel dump to sprawling city state with a permanent population. It’s a place of contrasts; of wealth and glamour, grime and crime. This is a fantastic (and authentic) Doctor Who setting with visits to casinos, grimy Downtown cityscapes and mafia style organisations. It makes you ponder wistfully. what this could have been if it hadn’t been quite so castrated by the author and the tone of the series. It’s a spaceport of humans, aliens, robots and androids and if you squint hard enough you can see Roger Langridge going to town with his depiction of it! I loved the Courier exploding because I genuinely did not think the book would ever go that far! Nikki might not be the most sophisticated character in town (and her character spec is a barely concealed reworking of Veronica Mars and Buffy the Vampire Slayer mixing private investigations with her father with martial arts) but she proves to be resourceful and quite engaging by the novels close especially in her dealings with the hilarious Judoon Commander. Thank goodness she appeared in a Colin Brake novel because I could only imagine how she would have fared in the hands of Terrance Dicks (casual rape, probably), Mick Lewis (eaten) or Lawrence Miles (deconstructed and turn out to be the Time Lord weapon that was needed to break the deadlock seal on the Time War). Is this the first time the TARDIS has been described as lost luggage? The Invisible Assassin is a virus coded to kill the Widow – I never saw that one coming! 100 bombs are due to go off at Terminal 13 which might sound like an act of desperation to inject some tension on the authors part but it really works, especially after one goes off and kills three Judoon and then another goes off almost immediately afterwards. It feels (for the first time in the book) that anything could happen. After everything being so obvious for so long there are a number of great moments when all the secrets are out in the open. I really thought there was going to be a touching reconciliation between Uncle and Hope (its that sort of book) but instead he dies in the most ironic of fashions (killed by the virus that he unknowingly sent after his daughter) and slips away with the Doctor pointing out the error of his ways and thinking his daughter must have hated him. Redemption simply isn’t an option. For once the Doctor’s ‘I’m so sorry’ feels heartfelt and not just a catchphrase. Salter’s involvement is well hidden beneath the more obvious twists and he makes a number of salient points about how it is ‘always about money’ and that if the Doctor is above such things then ‘the rest of us live in the real world.’ It might be another insurance scam but it does have some bite. Hope also dies off-screen (so to speak) and unmourned. 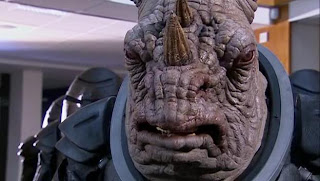 Embarrassing Bits: The tone of this novel is more akin to the adventures of the Famous Five than Doctor Who at times especially when we open with the case of the Invisible Assassin on the Spaceship Tintin! New Memphis sounds quirky but I’m starting to wonder if there’s a New Everything in the future. There is a massively unsubtle parody of the Heathrow Terminal Five crisis but at least it is part of the plot and not just a tasteless gag. Brake has this annoying habit of introducing characters and settings and describing absolutely everything about them in the first couple of paragraphs before they speak/anything happens. We literally learn nothing more about them than what is fed to us in that primary description. I understand that I am not the target audience for these books but there is such a thing as talking down to children and there are plenty of extremely engaging kids books out there that don’t patronise them in this fashion (there are plenty of NSAs that don’t do it too as exemplified by most of the novels since this was published). The Jupiter Investigation Agency reminded me strongly of The 3 Investigators novels I used to read as a little boy. If anybody hadn’t figured out that Hope was the Widow and Nikki’s father was Moret then I would seriously question whether you should be reading novels at all. I’ve never known Crime Lords that are so easy to make an appointment with! Don’t they have underhanded Empires to run? There’s plenty of references to deadlock seals, kronkburgers and psychic paper just in case we didn’t know what era we are in! Frustratingly Brake has his characters contradict themselves from paragraph to paragraph – its especially evident when Uncle wishes he could have the same working relationship with his daughter that Nikki has with her father than then exclaims that he wants her to have nothing to do with his sordid business.

Result: I just don’t know how to sum up my reaction to Judgement of the Judoon which has many fine elements but is constantly held back by the childish writing voice of the author that makes any attempts drama fall flat. If you thought that Terrance Dicks spelt things out (but he does it in all the best ways) then you haven’t seen anything! I don’t care if the target audience is an intelligent 12 year old…any kid worth their salt is not going to be stumped by this imminently guessable plot with every twist signposted. You get the feeling that there is a much darker, sleazier novel to be told in this genuinely great location. Instead what we get is something more akin to a PG13 James Bond crossed with Enid Blyton with a sprinkling of Scooby Doo (it was Uncles daughter all along!)! Saying all that Colin Brake has one very special weapon that he deploys to his full advantage. The Judoon Commander is a fabulous character and lifts the book every time he appears with his honking laughter and sledgehammer approach to everything. I wanted him to skip in the TARDIS at the end with the Doctor. After 200 odd pages of light prose and retarded plotting the book pulls off a coup in the conclusion with a handful of dark and exciting moments. I feel as if I should be harder on this novel but it does try and aim high even though it is restricted by the writing voice and the tone of the book range. Brake’s books are improving successively but that doesn’t mean this is anything to shout home about: 6/10
Posted by Doc Oho at 22:43