The Peacemaker by James Swallow 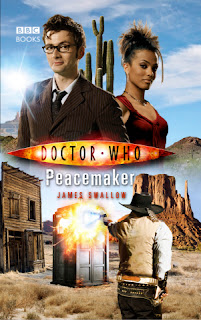 Plot: Standby for a rootin’ tootin’ adventure in the Wild West with dusky babe Martha Jones and her sonic slinging, fancy talking companion the Doctor! They’ll be parties, gunfights and plenty of riding through the desert and alien weapons that threaten to destroy the Earth in its infancy…

Mockney Dude: I really don’t understand the comments of people who say that the tenth Doctor is ill characterised in these books. Read on to hear some top notch characterisation of one the most subversive and aggressive of incarnations…

The Doctor had a way about him as if he took every piece of sadness in the universe personally and like he had the sole responsibility to banish such things. His open manner is infectious and his intelligence stimulating. He is so fascinated by anything out of the ordinary sometimes he needed reminding that normal people are caught up in it. ‘We just help the ones we can’ – the Doctor and Martha make an excellent life saving team. In chaos the Doctor became the eye of the storm. He held a sheriff’s badge once and it brought him nothing but trouble. He requires a gun belt so he can brandish his sonic! The Doctor can make a good time out of anything, never mind if it was terrifying as well. Usually it takes at least 3 minutes for people to want to kill the Doctor. He is a Time Lord and moves between the ticks of a clock. He is described as Rides in Night, Brother of Coyote and the man who defeated the Bad Wolf. A legend, a story for young braves. After Martha is shot he is a nightmare storm, absolutely furious as he approaches the long riders. ‘Like knows like Doctor. I can smell the blood on you. I can hear the echo of war that clings to your coattails. Such dark glory. I envy you.’ The Doctor’s mood darkens when the Clades brandish him a murderer. On another day he might have turned his back and let Nathan kill Godlove. When Martha is at the very edge of her life the Doctor can see the sheer weight of blame in Francine’s eyes. Once it is inside the Doctor’s mind it forces him to see Rose, Mickey, K.9, Captain Jack and Sarah Jane dying in wastelands of fusion bombs. He was willing to do a terrible deed, to destroy so much to defeat a terrible enemy. When the Clade ask him to merge with them and dangle the carrot of hunting down every last Dalek and erasing them from existence, he wants to agree. He hates himself for that. If he had been one with the Clade the Daleks would be gone and the Time Lords would have survived, Rose would still be with him and the Cybermen would be nothing but scrap metal. The Doctor knows violence, he knows anger only breeds more anger. The Doctor can think beyond four dimensions and he locks the Clade weapon into a feedback loop. He doesn’t mess about, he drops a hill on top of them! With the Doctor around nothing will seem scary again.

Delicious Doctor: You will hard pressed to find a book with Martha written for more accomplished than Peacemaker. James Swallow simply gets her, the mild lust for the Doctor, her love of travelling and her ability to snap into action as a training medical student. Throughout she continually sparkles with wonderful observations and sneaky peeks at her family life and Swallow seems to enjoy really selling how accomplished this duo can be at their height. Whilst Donna will always be my favourite tenth doctor companion (and one of my favourite companions full stop) Swallow convinces that Martha was top dog here.

Martha slyly suggests that their movie is a date. When they were kids Martha, Leo and Tish always stuck on a western whilst Francine cooked a joint and made great roast potatoes. With her mum and dad they would eat during the last half  and thinking of them causes a tightness in her chest and a pang of homesickness. She feels cheerless that a creaky old western is the only way she can feel close to her family. Martha wonders when she will get blasé about time travel because it hasn’t happened yet. She wants to visit the Alamo, Deadwood, Tombstone and the gunfight at the OK Corral (‘Been there, done that’ the Doctor retorts). Martha studied smallpox in her training and remembers the victims scarred by lesions and blinded. Quack Doctors with made up cures make Martha quietly furious. At times the Doctor thinks he is in charge but that’s not how they work. Martha sighs with regret when she tells Jenny its ‘not like that’ with the Doctor. She thinks life challenges us and we should challenge it right back. Injured people are her priority. I love the moment when the Doctor makes Martha realise that prejudice can cut both ways. Martha sticks her cowboy hat at a jaunty angle and declares herself ‘very Madonna.’ Living on the outskirts of London’s sprawl all that country horsy stuff felt a million miles from the world she comes from. Martha recognises shock in Nathan, hiding bereavement behind a wall of anger. Martha feels sadness about her family knowing they are so far away but joy knowing they are waiting for her. Lately Martha has learnt a lot about courage, to be afraid and still face what terrifies you. Trying to be as bold as the Doctor, even for a moment, was never easy. Martha is shot and the pain is like a million times every broken bone, rotten tooth and gut sick agony all in a rush of hurt. She actually thinks am I going to die? Martha snogs the Doctor to bring him back to reality. Whenever she has a bad experience in the past Martha always called Tish but she’s not sure her sister would believe her anymore. 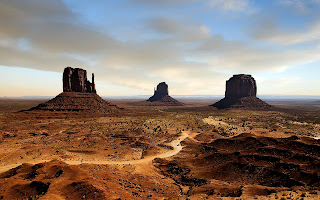 Great Ideas: White fire ripped into them turning their flesh into ashes – you know you are in for a well characterised book when two incidental characters jump of the page so well in the prologue. The planet Hollywood has its sign made out of ice and rock dust in orbit. The Doctor is taking Martha to the pictures where the chairs are intelligent and mould to your comfort zones. I love the idea that one of the films is the Starship Brilliant story! Smallpox has been cured in the Wild West? Nathan is one of the townsfolk who was struck with the pox and cured and now he is plagued by terrible dreams of a future war. I like the way Swallow makes you feel sympathy for the unlikable characters in this book, especially Sheriff Blaine who is shot dead after betraying the Doctor. There are small mentions of naongenes, New Earth, small moments of continuity that place this firmly in NuWho territory. The Clades are weapons that are independently intelligent and so advanced they are capable of conscious thought and action. They would hunt down and destroy their creators enemies without pity, remorse or pause. They are the pinnacle of biological engineering named the Peacemakers, the last resort. The peace that reined in the wake of weapons brought untold prosperity. The Clades watched and waited through peace time, silent and calculating. Without fire, blood and destruction they had no purpose. Peace was repulsive slow decay. They reactivated themselves and turned on their creators, it had been what they were made for. They don’t want power or wealth, just to destroy. There’s always a war going on somewhere and now the Clades exist as mercenaries. All they leave behind them is ashes and destruction. They have a limited regenerative ability built in – Godlove’s cure all. Side effects are fragments of the Clades battle reports from a million campaigns across the galaxy. The telepathic imprint of a never ending war. The Clades are insidious, Martha will die slowly unless they take them Godlove. Walking Crow’s sacrifice could have been like a hundred other scenes we have seen of this ilk but instead it is dignified, poignant. I love Martha’s mow-bile from Nathan’s point of view! The long riders tear a rattlesnake in half and eat the raw meat in silence. Like an angry child in a tantrum the Clades were not going to go quietly. They’d want to destroy something just because they could.

Result: The beating heart of the American Frontier is our stomping ground in this attractive tale, the Wild West in all its glory! What impressed me here was how confident and engaging the prose was, James Swallow is not a name I am familiar with but he writes a Doctor Who story with artful passion. His characterisation of the Doctor and Martha is peerless and both characters jump from the page as living breathing people. The Clade backstory is a little similar to that of the Daleks but its such a good story who actually gives a damn? I am not a huge western fan so the fact that Peacemaker appealed to me as much as it did was down to some nifty writing, an authentic location and a real sense of pace of danger. Lets see another from this accomplished writer please: 8/10
Posted by Doc Oho at 14:39