Instruments of Darkness by Gary Russell 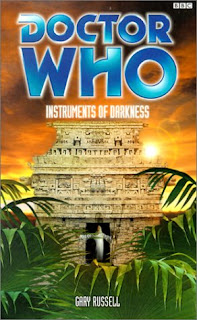 Plot: The Doctor, Mel and Evelyn take on a sinister shadow government. But not until they reach page 200. Lots of characters from Gary Russell’s earlier books return to say their goodbyes, including the sweet gay couple Trey and Joe, torn apart by alien involvement. And a sinister man wants revenge on the Doctor for stealing his memories…

Theatrical Traveller: This is really the sixth Doctor from the audios rather than the sixth Doctor from the telly but never mind. And never mind that he spends an inordinate amount of time doing sod all but talking about his feelings. Frankly, the sixth Doctor is one of the few that can actually make this kind of material work. Rather than wearing his heart on his sleeve, he hides his real feelings away behind bluster and bravado so when somebody he means this much to him resurfaces in his life, its quite fascinating to watch him open up…

His relationship with Mel is fun and cheeky. He said he was a vegetarian (when it suited him). Although his wit, sharp incisive mind and heroic drive stay the same, when the Doctor regenerates each new body takes on a distinctive approach to haute couture. He will not acknowledge that his outfit draws attention and he genuinely believed he looked good. He is genuinely tactile around Evelyn. Their friendship was very deep and cut off abruptly. He’s not as sweet or elegant as some of his earlier incarnations; he cannot wear his heart on his sleeve anymore. He left Evelyn on Earth to watch over Joe Haimbridge, to watch the consequences to the people whilst he got on with the bigger picture. The Doctor might be approaching the big ten double-oh but he’s got an eternity until old age hits him. He was terribly, terribly lonely and Evelyn provided a companionship that went beyond just being someone in the TARDIS to talk to, laugh and joke with. When Evelyn said she wanted to leave, it really hurt the Doctor. The Doctor can be seen as a roguish charmer, a hero, someone who defies Time Lord nature, romantic, dashing, passionate but he’s still an alien, his feelings and emotions are alien too, and he’s far too big and complicated to be weighed down with human characteristics. The Earth is very special to him. He had wisdom, charm and darkness etched into his face.

Loony Lecturer: How nice to introduce Evelyn to the books! She is one of my all time favourite companions from any medium and rightly deserves to have more adventures penned wit her involved. Whilst it is a shame that this contradicts both Thicker Than Water and Spiral Scratch her inclusion is still much appreciated. Her relationship with the Doctor always felt special to me and to see it explored in as much depth as it is here cannot be a bad thing, even if it does hold up the plot.

Evelyn was dumped in 1988 by the Doctor who was hurt that she wanted to leave. She feels frustrated at being forced to live her life trapped out of time and desperately wants to see her mother (before she dies) and husband (after their divorce) and tell them how much she loves them. She wants to tell her younger self who at this point (before she met the Doctor) is going through a crisis, that things will get better. She gets terribly lonely; she misses her books, her photo albums, her cardies and her students. 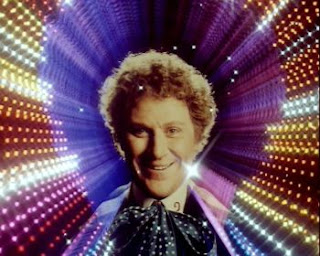 She wants to go home to a life of familiar things. She goes by the name of Eve Richmond, her married name. Evelyn swore if the Doctor ever returned for her she would have nothing to do with him unless he was going to take her home. She only criticises the Doctor to keep him on his toes. Evelyn admires the Doctor, likes him enormously. She was happy to travel with him – her divorce had come through, she needed to escape and the Doctor gave her a wonderful gift of being strong again. The Doctor says: “Over the years, as you say, the TARDIS has been home to a large number of people other than myself. For the most part I liked them, they liked me, we faced danger, we had fun but eventually one or the other of us realised it was time to move on. And when they went I was sad. We were friends but I knew it was the best thing for them. I suppose as time went on, I got slightly hardened to it – one day they would tell me they had met someone, or found something worthwhile to do, or been given an opportunity to go home by a more direct route than me and the TARDIS. And I’d say goodbye and move on. But Evelyn…Evelyn was different. For the first time in years I had met someone who was, well, an equal. Evelyn didn’t need rescuing too often; I can remember one or two ferocious creatures that needed rescuing from her. She used her brains, her wit and experience to get out of any real trouble and we faced things together. She’d had a lot of life experience you see – she was divorced; she had spent most of her life dealing with younger people, her students. Nothing fazed her. She even held her own against an entire Dalek army once. We read the same books, laughed at the same jokes. There was an unspoken respect and equality between us, I suppose. She could make analogous deductions no matter what planet we were on, who we were running from, or sharing dinner with, or shaping the political structure of.”

Aieeeee: Finishing off this finely fleshed out trio is Mel. Do you what I think is hilarious? You think of Mel, one of the least popular companions of all time…personally in retrospect with her audios and books taken into consideration she was one of the best. Here me out, here me out! People are always moaning that the Doctor and his companions never got on…the sixth Doctor and Mel did! Colin and Bonnie have an excellent rapport (go listen to The One Doctor) and the Doctor’s verbose bravado and Mel’s obscene common sense makes them a frighteningly successful pair. It is such a shame that Colin was sacked when he was…I feel they would have made an excellent pair.

Mel is pleasant enough company, intelligent and quick and her enthusiasm cannot be faulted. She is a petit vegetarian health fanatic! She’s sweet, inoffensive and despite having a vocal range that would put Wagner’s Valkeries out of business, fun to be around. Life with the Doctor had taught Mel to expect the unexpected – it was more fun that way. And safer. She doesn’t fancy seeing her parents in this story – what if something has happened to them or if she had already returned home? Mel knew she wasn’t the first person to travel with the Doctor but stupidly thought she would be the last and that he would settle down after their adventures. Mel refuses to be cynical and belligerent about the universe. She thinks the Doctor is in love with Evelyn but Evelyn firmly refutes that. 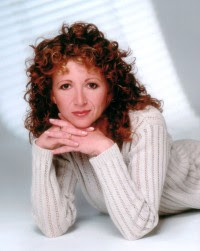 Twists: Chapter One features cot death, throat slashing, attempted rape and murder. What’s this? A return to the New Adventures? Ciara and Cellian are back, mending their ways with Joe Haimbridge in tow. Underneath Paris, the mysterious John Doe is running a secret organisation that controls the world’s governments. John Doe is an amnesiac UNIT operative who wants revenge on the Doctor who stole away his memories. The opening of chapter eight is nasty – Tim slaps his girlfriend about and forces bags of coke and cider down her throat until they explode and she dies of an overdose, drowning in her own vomit. Trey has been prostituting his mind to C19 and after falling into a coma is kidnapped by Magnate. In an eerie sequence Dickinson discovers Woody’s life erased and notes that say he was going to die in 5 days time. Magnate is revealed as a powerful psionic being known as Tko-Ma. Him and his brother Lai-Ma spent several millennia destroying worlds – they were exiled to a pocket realm – reducing their strength. They want to see which of them could destroy the Earth first; Tko-Ma founded the Network (Magnate) so he could track down his brother. The Cylox are like naughty thirteen year olds only with the ability to destroy galaxies. The SPnets destroy his secret plane of existence and the Doctor traps him. Ciara is shot by John Doe and she and her brother both die, finally getting some peace. In turn John Doe is shot when he threatens Evelyn. We realises with some sadness that he was Jeremy Fitzoliver, the useless **** who used to bungle the third Doctor’s adventures. Turns out a piece of equipment the Doctor order destroyed Jeremy started playing about with and thus he lost his memory and was sent away to recuperate. The Ini-Ma was the Cylox’s jailer and she sacrificed her bloodline to see them imprisoned again. The nine-strong SPnets led by Trey and Dudley want to be free – they the power to help or destroy the Earth and will only help on their terms, not as lab rats. The last two pages are probably the best things Gary Russell has ever written.

Funny Bits: “And you remember that lovely car we hired? The one you’d told me you’d taken back to The Golden Coast? The Volkswagen. Green, convertible, big headlights, dent in the offside wing?” “What of it?” asks the Doctor innocently. “I’ not sure what is worse actually? The fact that it is parked in a huge oil covered TARDIS bedroom. Or the fact that it now has a collapsible roof the same colour as your trousers. Or indeed the green sun strip across the windscreen saying ‘The Doc’ on the driver’s side and ‘Companion of the moment’ on the passenger side!” Tonka Travers fell in love with Evelyn! That’s why he was so moody in Terror of the Vervoids! Intrigue and mayhem indeed! Mel has bat phobia! Which kinda of explains a lot about Time and the Rani. Evelyn refuses to let the Doctor borrow her car so he has to run after the train. Feeling guilty, she gets Mel to run after him with the keys. Cheekily before she can catch up with him he drives past in her car anyway…and she realises she has the keys to his VW!
“Doctor! Doctor thank you for getting back to me. Er…which one am I talking to by the way?” 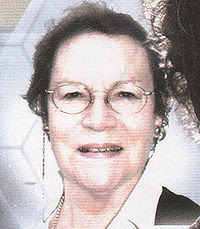 Result: How on Earth is this written by the same man who wrote Divided Loyalties? Instruments of Darkness is less of a story in its own right and more of a tying up of loose ends from his previous and would probably read ever better if The Scales of Injustice and Business Unusual were read directly before. Whilst it is a case of throwing in loads of ideas in one pot, most of the ideas here are great (John Doe, Magnate, the SPnets) and the although the plotting is all over the place (you have a really slow first 200 pages followed by a frantic rush at the climax) it reads like a dream thanks to Gary’s expressive, emotive prose. It’s the characterisation where this story scores though, with the Doctor, Evelyn and Mel removed from much of the action to have their own private drama and guest characters such as Trey, Dickinson and Jeremy who all feel very real because of their feelings of loss. It’s a book that needs serious tightening up but I found it charming for the most part and far more interesting than many of the surrounding PDAs: 7.5/10
Posted by Doc Oho at 17:18