Festival of Death by Jonathon Morris

Plot: Oh my word what an incredible plot. Frankly I would not even know where to begin to explain the intricacies of this book. Needless to say the Doctor dies, Romana meets herself and K.9 turns very, very bad…what more do you need to know?

Teeth and Curls: Just one of the great things about Festival of Death is its perfectly captured regulars. Who said only Gareth Roberts can get this irresistible trio right? Frankly it is a testament to the skill of Johnny Morris that he manages to focus so intensely on his plot and yet still get the regulars pitch perfect. The Doctor’s lack of academic achievements are secret something of an embarrassment for him, no matter how much he protests to the contrary. Typically he tries to bluster his way out of arguments. His reaction to arriving after he has already saved the day is one of totally joy! Described as a cosmic beatnik. However upon realises that he sacrifices his own life in order to save the G-Lock he cracks under the strain of his impending death (in a top dramatic moment he throws Romana and K.9 out of the console room: “Just leave me alone. Leave me alone, both of you.”) He is a toothy guardian angel whose eyes can grow as large as saucers. In one of several brilliantly clever sequences the Doctor manages to rescue himself (after already telling Romana that he will resist the temptation to converse with the greatest intellect on the G-Lock) and seeing himself he is quite disconcerted as to how much he rubs his chin and ruffles his hair but eventually comes to the decision that he is a handsome devil. There is a lovely conversation with him and K.9: “You’re still my best friend you know.” “Query. Is mistress Romana not your best friend?” “Well. She’s my best friend too. But in a different way.”


Intelligent Aristocrat: Romana is the Doctor’s wife in all respect except them actually getting married. She calms him down, she corrects his errors, she watches his back and she admires him greatly. She is utterly perfect for him in every way. I love how she continually corrects his mistake with the first law of time and when he finally gets it right she goes to correct him again, just because she always does! She is devilishly clever, predicting that if they are to come back to the G-Lock again they can arrange to have somebody rescue them! And she is aware enough to make sure it happens at the end of the book! Chatting with Evadne: “What is it you do then?” “Save planets mostly.” “But what do you do when you’re not saving planets?” “To be honest we don’t usually get time for anything else.” Romana also thinks she is the greatest intellect on the G-Lock. She has a habit of running into danger and sorting it all out, the Doctor thinks she is a charming girl. When meeting herself she cannot believe how conceited she is!
The Doctor and Romana sum up their adventures together:
“We get involved.”
“As usual.”
“Get accused of things we haven’t done.”
“As usual.” 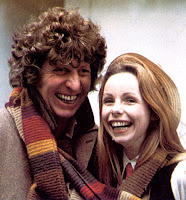 “And then save everyone from certain death.”
“As usual.”


Twists: ‘For the rest of his life he would remember it as the day he died’ – a brilliant first line and even more brilliant when you have finished the book and understand what it means. The G-Lock is a great idea, a graveyard of ships encrusted around a pleasure cruiser in hyperspace. The Doctor and Romana arriving after they have saved the day is such a great idea, why has nobody ever thought of it before??? – (“You don’t remember? You saved it from certain and terrible destruction?” “How marvellous. That’s just the sort of thing I would do!”). Preja vu is a term coined for Time Lords, a sensation that one is going to have been somewhere again. Gallura’s death and birth are counter pointed beautifully on page 51, clever in itself but inspired when you realise (later on) that one moment follows the other. Page 72 is excellent; the reader gets to experience the afterlife. When you realise that the Doctor and Romana once again have already been here and that they will have to go back AGAIN things start getting brilliantly loopy! After the Beautiful Death the tourists start getting out of their coffins…still dead! Romana meets the Doctor from the future. The Necroport is generating vast amounts of power, enough to send shockwaves unfurling backwards and forwards in time, bringing 3012 and 2815 together and the survivors to the present day. The victims of the Beautiful Death and being used as vessels for the survivors of the Cerebus. When we actually see the Doctor dead on pages 135 it is a hell of a shock because we all expected him to survive. The Doctor sums up the situation with his usual eloquence: “Two of me? A future me and present me? Aha! Until such time as I become the future me, when the present me will become the past me and the future me will become the present me. D’you see.” When you realise that ERIC is only suicidal because he was blamed for the deaths of the passengers even though he tried to prevent the disaster it makes his character suddenly very poignant. Captain Rochfort tries to take the blame away from himself and tortures ERIC by telling him to commit every second of his run time on suffering the guilt of a mistake that wasn’t even his. Even worse, Metcalf tortures ‘future’ ERIC by giving him insoluble equations that will make him ‘die’ and reboots him over and over. Just when the Doctor thinks he has gone back for the last time (or rather the first time!) ERIC recognises him: “You know this sort of thing is starting to get on my nerves.” Pages 153 and 154 are great, the Doctor and Romana leaving everything exactly how they found it for their arrival at the beginning of the book! Paddox slaughtered most of the Aboreteans on his experiments. The Necroport isn’t the power source for the Beautiful Death; the Beautiful Death is the power source for the Necroport, feeding the energy from the participants and into the 3 coffins. Aracnopods are biogenetically engineered life forms, homicidal, criminally insane, believed indestructible and capable of putting themselves back together when blown up. They ate most of the passengers and crew of the Cerebus. Tarie doesn’t go through to the other side and thus Hoopy survives. The Aboreteans secret is that they cannot die, when they die they go back and live their lives over again and the whole reason Paddox has set up the Necroport and the Beautiful Death is so he can go back in time and live his life all over again and save his parents (from the first scene). The Repulsion is the state between life and death and the reason the 218 Beautiful Death revellers come back as zombies is because the repulsion hijacked their ‘deaths’ and wants to get enough of itself in our reality to come through totally. When the Doctor finally ‘dies’ the Repulsion thinks he can download himself into the Doctor but instead the Doctor arranges for him to transfer to K.9 and then ERIC and once there the Doctor finally puts the computer out of his misery, as he promised earlier and kills the Repulsion too. In a twist of bitter irony Paddox does manage to go back and wakes up as a child but soon realises that the Aboretean gift is theirs alone and that he is going to have to live out his life in exactly the same way, over and over again in a never ending loop.

His payment for wiping out the species is to be trapped in this endless cycle. Serves him right.


Funny Bits: Hoopy has some great dialogue: “Totally Ungroovy! This is beyond agony! This agony 2, the sequel!”
“Sorry I ever doubted you K.9.” “Accepted and archived for future reference.”
“Apparently the Hyperspace tunnel is about to collapse killing us all. But there’s no cause for public disquiet. Thank you.”
“They claim that had they been aware that death was fatal, they wouldn’t have submitted to the process.”
One thing the Doctor had noticed was that villains always loved having big levers to pull. Probably compensating for something.
We here Metcalf’s tragic tale of his wife running off with a holocameraman and when he tries to escape cowardly from the perilous situation what does he find hiding in his escape pod…a holocameraman!
The Doctor’s death scene is so funny it hurts, especially: “Romana, remember keep Australia beautiful” and “Kismet Romana” “You want me to kiss you?” 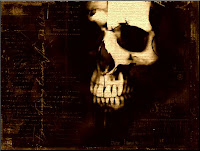 It is well worth waiting for the story of Harken Bart’s downfall. He made a fake documentary about the criminal underworld but attempted to broadcast it as the truth! Not realising that one of his actors had just been hand picked as the face of Nova Bright (Makes your Pants more White!). Both were broadcast at the same time, ruining his credibility.


Result: Astonishing. I have never read a book with such damnably clever and intricate plot, one which has the outward appearance of being such a sprawling mess and yet all converges together with inspired clarity. The narrative construction alone would be enough to recommend this book but you also have oodles of incredible plot twists (especially amazing considering we know the outcome at the beginning!), fantastic characterisation of the regulars (Gareth Roberts eat your heart out!), hilarious jokes and brilliant dialogue. Its outstanding on every level and remains riveting throughout, climaxing on one of the best ever comeuppances a villain has suffered. It seems any story to revolve around the Doctor’s death (Alien Bodies, Blood Heat) is an instant winner! Not only the best PDA to this point but easily one of the best Doctor Who books of all time: 10/10
Posted by Doc Oho at 08:49