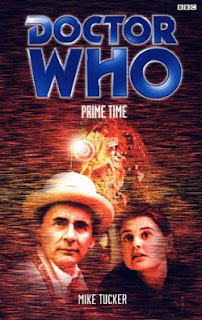 Plot: The Doctor and Ace are set up to take part in the most exciting broadcasting phenomena ever, Doctor When. To up their viewing figures they are put through some terrible trials, old enemies, new monsters and lot of running around…all broadcast to the salivating population

Master Manipulator: At the beginning of the book the Doctor is uncommunicative and serious and it is starting to nark Ace. Ever since his tussle with the Master on the Cheetah Planet the TARDIS has felt more than a ship, it had felt like home. A hero of mythic proportions? The Doctor says he might be a girl, someday. There is a lovely scene that sees the seventh Doctor investigating the aerial on the desolate surface of the moon, the light spilling out from the TARDIS (it reminds me of the cover of Timewyrm: Revelation, except with no dancing skeletons). Who on Earth would take the Doctor seriously on the telly in a question mark pullover? He is used to making complicated plans, it felt unusual to be so in the dark. He and the Master had been friends for so long, enemies even longer. He has always been more at home in corridors. There is a wonderful slant to the book that sees the Doctor questioning whether he could let the Master die but soon realises that he cannot, despite everything and then finds himself in the even more difficult situation of having to trust him or die. Some part of him wants the Master to get a new body, then that overwhelming drive would leave him and he could have some measure of peace. The Doctor had seen so many horrors in the universe, been presented with unspeakable cruelty but the flesh bank of the Fleshsmiths would continue to haunt him for a long time to come. So many innocents in need of a saviour. So many innocents that he could not save. The best he could offer them was death and there had already been far too many deaths on his conscience. Completing quite a nice package for the seventh Doctor, he sums up his televisual existence with a cutting last minute speech after he has defeated Lukos: “I live my life my own way, and I wont be forced into a mould that someone thinks I should be fitted into. I cannot be standardised, or compartmentalised, or Hollywoodised. I will not be written against type or censored. In short, I am a broadcasting phenomenon. There is nothing else like me. I am unique, and you haven’t handled me properly.” It is only in the shocking final scene that you realise just how much the Doctor cares for Ace, he finds her grave and stows her coffin on board the TARDIS, promising to defy Time and stop it happening.
Oh Wicked: It is a far less troublesome time for Ace for the most part until she is put on a show of her own, This Was Your Life. Here she learns that her mother would die alone and wishing her daughter would get in touch. Then she is shown her own grave, live on TV! She thinks the Doctor and her had worked together well for many months. Travelling through time, she often forgets her birthday. Alien food was always something of a lottery for Ace. She was the perfect companion in many ways, never complaining, rarely getting herself in to trouble that she cannot get herself out of but her boundless enthusiasm can get a little wearying.
Foreboding: The last scene leaves the Tucker/Perry Doctor/Ace arc on a real cliffhanger, Ace is dead and it will happen soon in the future. See also Embarrassing bits.
Twists: The Doctor is something of a celebrity in the universe, his part in the Coralee affair is known far and wide. The reveal of new reality TV show Doctor When is a great moment, especially because I was having a lot of difficulty figuring out just where the story was going until that point! See the Doctor engineered into a scenario he will find impossible to resist…transmitted into every home! Lukos wants to steal the TARDIS so he can go throughout time and film ratings winning events such as the birth of Jesus and the Big Bang. The reveal of the Master is another great shock. Never saw that one coming! Greg waking up without his legs facing Eeji’s disembodied head is certain 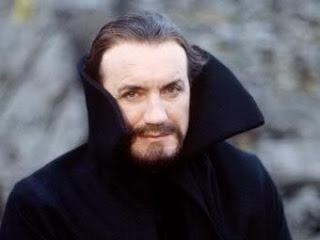 ly memorable. The Master is after a new body; the Fleshsmiths created one for him but betrayed him. Considering her future in the New Adventures, the news of Ace’s imminent death is another good shock. In another grotesque sequence we get to see into the flesh banks, a vault of hanging bodies, limbs sheared away and hanging like vines, Ice Warriors, Draconians, Ogrons… The Fleshsmiths are using Channel 400 programmes to carry a deconstructive enzyme, an agent that will break down flesh into a transmittable form. When the viewing figures reach their maximum it will trigger the enzyme, activate the transmitters and the flesh banks will be filled with raw, fresh material. However, Lukos is double double-crossing them, he knows of their plans and is planning to stop them and thus get political power for Channel 400. The Master tears out a Zzinbrizzi throat with his fangs. The Doctor in agony, thousand needles puncturing his skin, pipes pulsing with blood…it is a terrifying image until you realise it is a clone and it melts, introducing a biological agent into the Fleshsmiths that sees them all melt away and die. The Master watches furiously as his new body bubbles and melts.
Funny bits: Mike Tucker makes a couple of cracking digs at TV and Doctor Who:
Ace: “You’re a presenter of a new line of children’s TV programmes.”
“Giving gullible members of the populace a few fleeting moments of fame and very little money has proven elegantly profitable and the brain dead masses watch in their millions.” Hahahaha!
Having the cliffhanger at the end of part engineered so beautifully recalls Vengeance on Varos, but in a good way.
Its rather amusing to see how much we are manipulated into getting excited and then the sudden reveal of the Master…excitement!
There is a great gag about swearing on page 97.
The 7th Doctor: “He’s a ham. All that overblown emotion, it’s a performance of the lowest possible quality – he gabbles his lines and emphasises in all the wrong places! No star quality” Oh my God that is brilliant!“
The hiatus in the Doctor’s adventures will only serve to increase our audience share.”
Embarrassing bits: Aside from the regulars (which includes t

he Master), characterisation is thinner than Weight Watchers soup. Whilst the ending is fantastic it is not followed up until three years later! By then we had all forgotten what the fuss was all about.
Result: Forget the loose prose and lack of characterisation; this is an entertaining adventure. Admittedly it is a huge step down from the previous group of books but what this book has in spades is the ability to twist and surprise. Mike Tucker has constructed a fun story around three great shock moments (the Doctor’s reality TV show! The Master! Ace is dead!) and they keep the story moving, striking a few punches against both Doctor Who and television in general along the way. It is interesting to see the Master involved but not as the villain of the piece and whilst we are not approaching anywhere near the potential of his character it is nice to not have him hamming it up with some ridiculous scheme and just an intruiging supporting character. The Fleshsmiths are a great notion too and their flesh bank is disgusting. There is some padding and if you pulled a thread it would fall apart at the seams but for once literature is not what is sought, simply a good, fun read: 6/10
Posted by Doc Oho at 22:31