Emotional Chemistry by Simon A. Forward 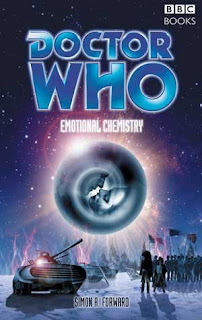 Plot: Just what is it that links Russia in 1812, 2024 and 5000? The Doctor, Fitz and Trix become embroiled in a dangerous tale of time travel and the lengths two people will go to for love. With so many years between them, will Dusha and Kinzhal tear the world apart to find each other?

Top Doc: Frustratingly the Doctor appears in about five (short) scenes until halfway through the book and considering the wealth of characters involved he feels horribly like an extra in his own series. Once he bursts in on Kinzhal, it feels like he has finally entered the book. Once he does get involved however the characterisation is as good as we have see lately, with a shocking trip down memory lane as he meets up with three people (Aphrodite, Bugayev and Kinzhal) who have all met him before his amnesia. He is always bothering the authorities and having a gun pointed at him, despite the novelty, is a familiar scene for the Doctor. His thinking is rarely able to keep up with his feet. His life has been touched by remarkable people lately. He lights up people’s lives with his eye, mind and thoughts. His battle of wills against Garudin is great because it shows how strong willed he is compared to everyone else in the book. When learning that people already have a preconception of who he is, he grows increasingly childish, refusing to conform to other people’s perception of him. He feels it undermines his sense of self. The idea of him defiantly arguing the case for the Magellan and their wish to break the rules and have a child feels so right. Even if he had his memories, would he care to remember them? He considers the possibility that maybe he is an alien with the ability to change his appearance. It is strange to see him so emotional, affected as he is by the strength of two extremely powerful empaths. Fitz admits that the Doctor shares a sort of chemistry with everyone.

Scruffy Git: Fitz falls in love again. Groan I hear you say but this time its different (like Book of the Still) because his desire for Aphrodite is reflected back at him and he is caught in the impossible situation of fighting his feelings for her sake (although technically this makes it failed romance number thirteen!). A very interesting take on the usual shagging he gets up to. He wonders at the end, when he makes his choice to free her if he has made a narrow escape or if he has thrown away the greatest opportunity for love in his life. For the Doctor’s assistant he is not very well informed and Bugayev compares him to Trix’s brilliant performance as Ms Atherton, thinking Fitz is a poor supporting actor, giving them both away immediately. He belongs backstage. It is surprising how a shapely figure can bring out his chivalrous side. A considers himself a selfish coward and admits temptation is far more likely to win him over than torture. He is not a space-time virgin and has unshakable loyalty for the Doctor. He isn’t sure if he counts Trix as a friend yet. Confronted with Garudin’s lustful thoughts he is ashamed of his own baser desires. There is a vulnerability about him that marks him as a protector and not a possessor. He has a soft heart and is genuinely charming. Impossible to think of as a man.

Identity Tricks: The best use of Trix yet as we actually get to share her thoughts. Like any good actress she uses her surroundings to imbue emotion in the part. During her cover story as Ms Atherton she includes details of a robbery, suggesting she was the victim when in fact she was the thief! Cool, with the slender and charismatic eye of a Hollywood starlet, a consummate actress. The person beneath her performance is engaging. It is the first sign that she uses her acting as a means to hide from pain; she tries to tell herself her character is reacting to men being shot to pieces around her. She gets jealously angry of Aphrodite trying to claim her loot. She fears she is losing her touch. She hates constructing personas on the hook without background information. Brilliantly she turns the tables on the Doctor when he accuses of her of obsession with possession, telling him she was after the locket for his need, forcing him to consider he has misjudged her.

Foreboding: The Doctor has the crystal and can get after Sabbath’s mysterious allies…

Twists: Despite being described after the event, the opening, with the Doctor being whisked off into the far future in flames, is arresting enough to grab the attention. The scenes of possession by Misl Vremya are genuinely creepy, leading to a horrific assault of Russia’s UNIT (Bullets raked across the window screen, punching craters in the driver, the lieutenant and the seat in front of him). Kinzhal’s own people are out to assassinate him, fearing his thirst for conquest once the war is over. Garudin is another loathsome bad guy (following up superbly from Basalt in Timeless), breaking Fitz’s fingers to torture information out of him and cracking his secretary’s head open with a hammer. The Misl Vremya is a great time travel idea, sending your mind back along the timeline of an object from the past until you inhabit the mind of somebody who had contact with it. The central idea, Kinzhal and Dusha, two halves of one being, punished for having a daughter (Aphrodite) is a genuinely interesting catalyst for events. Their punishment, heart and mind separated and imprisoned in separate time zones gives the story the excuse to be as epic and timeline spanning as it wants to be. Dusha’s solution, to touch 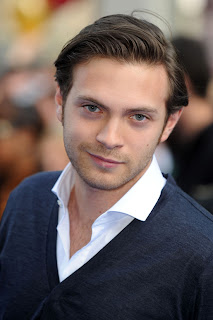 Natasha with a kiss of protection and thus building a bridge through time to Kinzhal, passing her luck on to Tatyana (2003) and Angel (5000) is breathtakingly clever. There is the usual threat to the Earth but even that is subverted, this time from Kinzhal and Dusha whose reunion will set the world on fire. The Doctor’s solution, to transfer Dusha’s mind via the locket to Angel’s mind, is simple but satisfying, especially Kinzhal’s reaction to this new form of intimacy with his other half. The psionic weapon that Trix loses is probably the one, which caused all that bother in the past in Eater of Wasps (who said the EDAs don’t give explanations…like the Burning monsters in Time Zero it comes years later!!!!). Kinzhal is responsible for setting up the time agency who were pursuing Greel from Talons of Weng Chiang.

Embarrassing bits: Without the blurb the first fifty odd pages are terrifyingly confusing with the story hopping from one time zone to another. Justin Richards should be shot for placing Emotional Chemistry where he did, if there was ever two stories that should have followed each other up it is Timeless and Sometime Never… (the build up in Timeless is dissipated by the distance between them) and this leaves Emotional Chemistry feeling (undeservedly) like a distraction. It should have been placed just after Halflife where it would have received the attention it rightfully deserves. The Doctor’s absence in the first half is keenly felt.

Result: It pains me to punish an author for effort but there is far too much going on in Emotional Chemistry, with a flourish of characters, settings and events that command the readers attention and Forward (agonisingly) injects sumptuous detail into each of them. I just could not concentrate so hard on everything with equal vigour and lost myself in a few places. This is a fascinating experiment with many great, great moments and another excellent plot, which weaves brilliantly through (and justifies) its three time zones. The prose is extremely imaginative and thoughtful, so noticeably colourful that it adds an extra layer of polish to the book. The characterisation rocks and there isn’t one person who rings false (if only there weren’t so bloody many of them!) and the regulars all shine apart from each other, especially Trix who has the ability to convince in all three time periods. Thick with incident, this is a flawed but winning attempt at capturing the feel of Russian literature, unfairly placed between two arc novels and well worth taking your time with: 7/10
Posted by Doc Oho at 07:21