The Eleventh Tiger by David A. McIntee 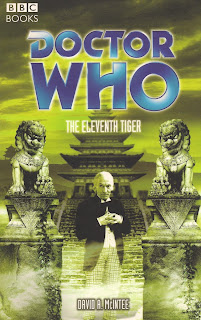 Plot: The TARDIS crew arrive in China, 1865, to find there is more to chaos than human violence and ambition. Legends of ancient vengeance are coming true. Long dead Emperor’s are being resurrected and an army of thousands lays dormant, waiting to be reborn and take over the world…

Hmm: Do the authors try harder when it is a first Doctor book? Many Doctor Who authors have done their best work when writing for the first Doctor. Its like the original Doctor raises everyone’s game because they don’t want to spoil the legend. This is certainly the best thing McIntee has written for BBC Books, beating his previous best The Face of the Enemy and Bullet Time. His treatment of the First Doctor is not as radical as it might seem (given he has a Yoda moment of martial arts) but he writes him perfectly to match Hartnell’s performance and captures his wisdom and magic beautifully. The setting, one of legends and scientific marvels in nature, is the perfect location for the astute first Doctor.

The Doctor, in his Edwardian frock coat and chequered trousers looked almost out of place in the futuristic TARDIS. He is always ready with an explanation and surprisingly youthful enthusiasm. The Doctor sees something of himself and Susan in Vicki. Everyone is important to the Doctor. He has exceptional eyesight for someone of his years. The Doctor being a healer and left in charge of Po Chi Lam just feels right. He can hold his gaze and judge a mans character. He gets very upset when people imply he is too old to do something. The Doctor is indomitable and shows iron in his backbone. He doesn’t belong to one place, he belongs everywhere. Is he searching for the truth? He could be pretty sprightly but always paid for it later. Susan had chosen to leave him already when he locked her out of the TARDIS but she just didn’t realise it so he made the decision for her. It was a far cry from the days when Ian and Barbara saw the Doctor as a cold-blooded kidnapper who abducted them for his granddaughter’s sake. What sort of person would not be capable of doing something stupid in a moment of panic to protect their family? It made the Doctor seem less cold hearted and alien than he otherwise would.

Schoolteachers in love: And never has that been more appropriate! For David’s Face of the Enemy to make sense this story had to happen sooner or later but I’m glad it was years in the making because it makes the developments surprising again. They are simply wonderful characters, a wonderful couple and superb for storytelling purposes. Rarely beaten in Doctor Who ‘companion’ history.

A couple of years ago Ian had thought teaching in Coal Hill and living in a small flat were normal. Now he thought his flat would feel dark and mysterious compared to the familiar sterility of the TARDIS. It felt so natural for Ian to be at Barbara’s side as though she had always been there. Barbara felt, with Ian unconscious, some part of herself had blacked out. Ian and Barbara are already married in their minds – they just don’t know it yet. Barbara had always loved watching the rain. It was such a fresh natural thing, bringing life to trees and flowers. Ian had never been particularly superstitious. Sweetly, Ian proposes he fights Jiang for the Doctor because he is disposable. Barbara’s earnestness surprised him; they had been travelling for two years and know each other pretty well but moments like this kept things fresh and surprising. Barbara admits that she loves Ian and kisses him. When asked if she and Ian are married Barbara replies, “No he’s not my husband. Not yet anyway.” Ian had killed during his time with the Doctor but he had never set out with that intention and had never done so when losing his own was the only alternative. Although he wasn’t particularly religious as an adult he still tried to hold one to the core values of the Ten Commandments he was taught as a kid. Ian and Barbara’s hearts had wed years ago – they were just waiting for their minds to catch up. Ian would kill and be killed for Barbara. At the stories close, after all the worry both has suffered over the other, their feelings bubble over and Barbara asks Ian to marry him when they get home to which he replies, “Yes.”

Space Orphan: Vicki finds this new form of travel exciting. Vicki did not dislike Ian and Barbara but they were so much a ‘couple’ she felt like an intruder when they were around. In a very sweet scene we see that Vicki is very attracted to Fei-Hung. She is pleased she didn’t have to dish out Bennett’s punishment because she doesn’t know if she would have the courage to see it through. She silently learns martial arts during Fei-Hung’s classes. Vicki might be from a more advanced time but she is still a child.

Foreboding: Ooh lots and lots for Ian and Barbara. Their relationship is in full swing and after this adventure they are set to leave the TARDIS more than ever before. Not only has the Doctor given them amazing adventures but he has also let them ‘find’ each other. So, happily, at the end of this book Barbara is making a dress for Vicki who is annoying everybody – the exact circumstances at the beginning of The Chase where Ian and Barbara depart the TARDIS. 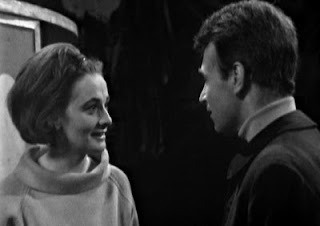 Twists: I love the cover which has clearly been photo shopped but there is something wonderfully mythic about it. Cheng and his bunch of bandits stumbling across possessed monks is an atmospheric opening – McIntee writes action like no other writer. What has happened to his writing: “Then a silver arc appeared in the blackness, like the white of an eye appeared as the eyelid parted on waking. It was the moon, emerging from hiding.” How atmospheric! Even a burning town is described with a sense of beauty. Ian is recognised in a restaurant and beaten to bloody pulp. The abbot has Lei-Fang’s eyes and tongue removed for disagreeing with him. The Festival of the Hungry Ghost – the town bathed in dark light – this really is an evocative book. There is a lovely scene where Barbara and Vicki shelter from the rain in a haunted house. The book plays a clever trick on fans – making us think that Major Chesterton is our Ian Chesterton – even to the point of having the amnesiac Major remember making love to a dark haired woman in Italy, just like Ian and Barbara in Rome. The Doctor’s ‘duel’ with Jiang from the point of view of his companions – outwitting rather than fighting – is simply the best PDA scene in an age. Page 230 is beautiful, written with incredible sensitivity. Qin Shi Huangdi, the First Emperor, wanted to rule forever and found a way of having his mind and personality recorded on a ‘stone tape’ – via an intelligence who wants him to do his bidding. In a great race against time we realise that Major Chesterton is in fact Ian’s great-grandfather and what he thinks is suicide for Barbara’s sake is in fact murder – erasing himself from history. The 8,000 are a ready made army awaiting activation by the stone tap energy. The terracotta statues coming to life and being smashed to pieces mid-fight is a fantastic image.

Funny Bits: You have to admire how the Doctor offloads a load of troublesome children onto Ian and Barbara and chuckles as he runs away.
The Doctor – “You know I think this might be why I enjoy the company of you young fellows! You’re just the right people to see the simple solutions!”

Result: Atmospheric throughout, The Eleventh Tiger educates, amuses, emotes and surprises. David A. McIntee has written a real winner because he has taken a long enough break to refresh his writing and some passages in this book are astonishing in their simplicity and beauty. The pace is relaxed but this leaves time to consider all of the regulars and give them all a number of quiet moments that deepens their onscreen characterisation. The plot involving the First Emperor and stone tapes is intriguing enough to hold the interest and the guest cast are great too, a lot of work has been put into what makes this characters work. Even the setting has a character of its own; China comes alive with traditions, myths, rituals and sometimes just with striking descriptions. However this is Ian and Barbara’s book and they consummate their relationship with far more believability than would be thought possible. You just can’t help but wish them luck in the future: 9/10
Posted by Doc Oho at 14:10