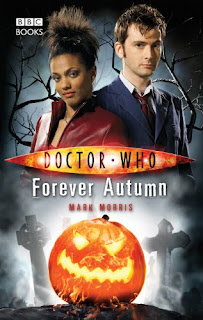 Plot: There’s a green pea souper closing in on Blackwood Falls and ancient evil buried beneath the town is about to make sport with their Halloween celebrations. The Hervoken are preparing to leave the Earth and they need human blood and terror to fuel their spaceship…

Mockney Dude: One of the best depictions of the tenth Doctor in print so far, his quirky English madness highlighted especially well against the family atmosphere of the Falls. Mark Morris nails David Tennant’s mannerism and speech patterns perfectly and it takes no effort to see this adventure taking place before your eyes with the Doctor running about like a spiky haired loon, frightening and cute in equal measure. He and Martha make a very effective unit in this story, the pair of them working together very well and understanding each other well enough not to push the other too far. I love how they squabble together like an old married couple at times and yet she trusts him to save her ad nauseum and he trusts her with the very important task of keeping the Necris safe.

He is all bony knees and elbows and spiky, tousled hair fizzing with energy. Martha finds him exhilarating and frustrating. Like a temperamental racehorse sometimes all you can do is hold on for dear life. We get to see the Doctor through the eyes of American kids and he comes across as a babbling lunatic! He still wants to know if the future him is ginger. The Doctor is so utterly naïve he thinks nothing of asking a 12-year-old boy to show him his bedroom. When told he is very forward the Doctor comments he is ‘forwards, backwards and sideways.’ He is genuinely horrified at the thought of quitting, he likes the challenge of the impossible as it sorts out the legends from the wanabees. The Doctor isn’t just smart, he sees everything. He has a dangerous aura about him. He cannot bear to be idle, mooching around, he always has to be doing something. An ideas man and a pockets well filled man! The Doctor gives the Hervoken ship indigestion by feeding it his blood. He will survive, he always does. The Doctor is somehow the most unsettling and reassuring man, a mixture of boyish charm and ancient wisdom. Martha forces the Doctor to stay behind at the end of the novel and make sure everybody is alright, he is still avoiding the consequences of his adventures. Martha wonders if he didn’t stick around because he couldn’t come to terms with the idea that wherever they go people always die. He was haunted by those he didn’t save. I love the remorseless tenth Doctor when he bares his teeth and after giving the Hervoken the chance to leave without murdering anybody and they don’t take it he reduces them to dust without remorse.

Magical Martha: The Doctor likes Martha because she uses her brain and she tries not to be flattered by such a lousy compliments. Martha gives Rick warm tingly feelings despite trying not to! Never stop asking questions, always have an enquiring mind, every day is a school day is what her mum always told her. Whenever the Doctor seemed to talk about Rose (every five minutes or so) she tried to steer him away. Martha had had enough witches to last her a lifetime. When asked if she is the Doctor’s floozy she answers, ‘I’m nobody’s floozy.’ She didn’t expect the Doctor to profess his undying love t her but a little chivalry wouldn’t go amiss. There is a sequence where Martha eats alone in an American diner that somehow drove home the possibilities of travel with the Doctor for me more than any alien world ever could. I love Martha’s ruminations on time travel, what if she phoned him and it was the future and something awful had happened or what if she phoned before she left and she was with whomever she was speaking to? She feels like the luckiest girl alive to get the chance to travel with the Doctor. Martha has to remind herself, whilst terrified, that she kept stepping back into the TARDIS precisely for reasons like this. Given all of the running, Martha wonders if any of the Doctor’s assistants have ever been fat. The Doctor tells the lads when Martha has had a few too many cappuccinos she runs around naked which she refutes but oddly enough they stick around her to find out! Life with the Doctor was meet people, share extraordinary times, move on. Even Martha, no matter how much she might want to, never looked back. 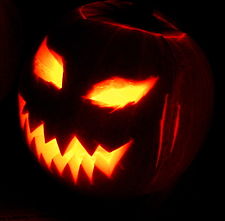 Twists: I love that cover, simple but really effective. Autumn is the smell of dry leaves, wood smoke and mulchy Earth – such an evocative description of my favourite season. The whole sequence of Dr Clayton drunkenly stumbling into the graveyard and watching in horror as a creature with a misshapen clammy face and clicking twig like fingers tearing free of the Earth and drifting after him in the mist is really unnerving. The green mist affects your mind and worms its way into your insecurities and phobias and intensifies them. The creature delicately draws an x in the air and reshapes Clayton’s flesh so he has no mouth. Mini whirlwinds, dry leaves whipped into rough approximations that toss dry leaves through the air like discuses causing deep, slicing cuts. Green light flows from the book like mothers milk into the bellies of many children. The backstory of Glenn and Jim is lovely, a genuinely subtle gay romance…see it can be done! The cat attack is described as a bristling, screeching legion of vicious teeth, unsheathed claws and blazing green eyes. The creature looming out of the mist in the diner is really freaky. The Hervoken are described as fading away like an ‘aspirin dropped into water.’ The wall opens like a huge toothless mouth and Mr Everson disappears inside with a sickening crunch of bones. The Hervoken ship is a tenticular subterranean system with the town’s people living atop like tiny parasites on the back of a giant crab. The Necris is the starter mower of the spaceship and the famous Blackwood is the tip of the ships nose. The Witchy Wars saw the Hervoken take on the Carrionites before they were banished by the Eternals. The ship is powered by pain, terror, distress, contained within the raw matter of blood, bone, brain and sinew. There is a scene of horrendous claustrophobia as the rubber clown mask glues itself to Jim’s face and he becomes a murderous subject of the Hervoken, bursting through the shop window and pursuing Martha through the streets with scythe like claws. Chris lights a toilet roll with a cigarette lighter and sets the cardboard skeleton that has just smashed through their hiding place on fire. Points for saving the day but he is so busted by his mom for having a ciggie lighter. It is lovely to have an alien race that communicates only in gestures, somehow it makes them more menacing. They need the terror and blood so the Hervoken turn the children into their Halloween costumes and get them to murder their parents.

Funny Bits:
· The beginning of chapter five opens with the most terrifying sentence, constructed from as many long words as possible!
· ‘Tell you what Chrissy boy; lets skip all the teenage angsty stuff. Lets just take it as read that you’ve got issues, that no one understands you and that you’re confused about your sexuality.’
· The Doctor to a cat: ‘A word of advice. If you ever get invited to a fancy dress party, don’t go as a nun.’
· The Doctor tries to convince Martha that the Binks clan from Star Wars are real! That George Lucas was picking up a telepathic message from a far away planet and worked it into his story!

Result: I can completely understand why Forever Autumn won the Doctor Who Magazine poll. The writing style is highly engaging and the horror is genuinely frightening in places, Mark Morris feeds on all manner of terrors from not being able to cry out, nasties under the ground, children turning bad and every day items trying to kill you. The Doctor and Martha work very well in the US setting and the guest cast whilst never undergoing any real character development all feel very real in their own way, especially Rick, Etta and Jim. The Hervoken are a great monster and their war with the Carrionites adds depth to a television story and their particular brand of magic and communications makes them terrifyingly vivid. Forever Autumn is an extremely easy book to like and an even easier book to devour, ideal night time reading in the Autumn as I did. One of a few Doctor Who books to actually give me a nightmare: 8/10
Posted by Doc Oho at 13:37